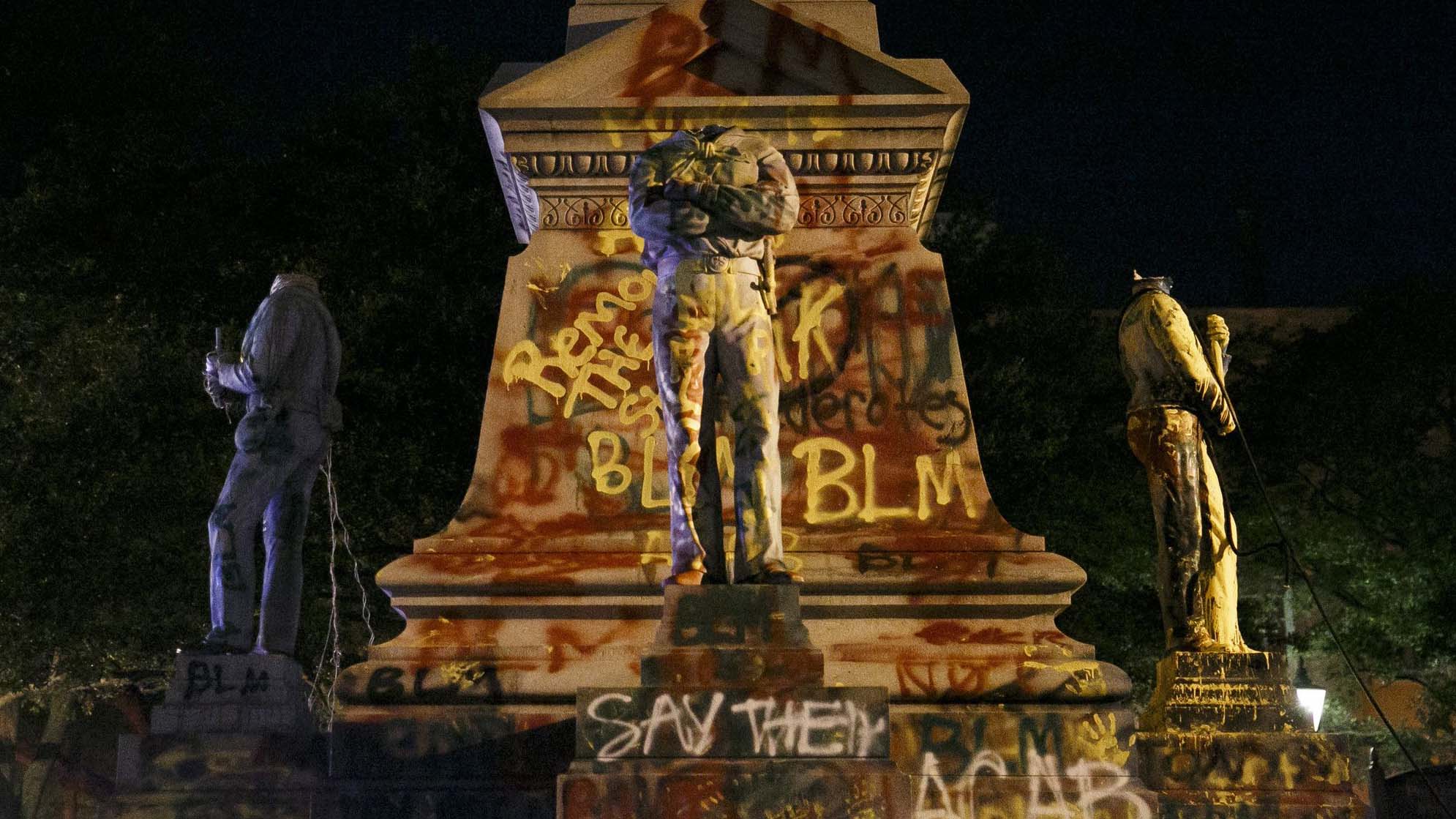 Photo by Kristen Zeis, The Virginian-Pilot. Demonstrators beheaded Confederate statues and then toppled one during a June 10 protest.

Portsmouth police have charged State Sen. Louise Lucas and multiple NAACP members with conspiring to damage a Confederate monument during a June protest that left a man critically injured and the monument toppled.

Public Defender Brenda Spry, two attorneys from her office and three others were also charged with felony injury to a monument.

Lucas has not returned calls seeking comment. WHRO has also reached out to Boyd but hasn't spoken with him yet.

Greene’s announcement immediately faced blowback from elected officials across the state. Most of those charged were Black.

Lucas, a long-time legislator who joined the Senate in 1992, is among a group of lawmakers calling for police reforms during a General Assembly special session that begins Tuesday.

Gov. Ralph Northam and other Democratic lawmakers questioned the timing of the charges. Northam said he expects to see her in session Tuesday.

Sen. Jennifer McClellan added on Twitter the "timing of these charges on the eve of a special session to take action on police and criminal justice reform is outrageous and suspicious."

Greene said her department investigated the June 10 incident to ensure those who were involved in the vandalism are held accountable. She acknowledged that monument vandalism has occurred across the country. But she said a serious injury to one demonstrator made the Portsmouth incident unique and prompted the investigation and charges.

"It was the duty of the Portsmouth Police Department to begin a thorough and comprehensive investigation," Greene said.

Greene said requests were made to state and federal authorities to conduct an independent investigation. A discussion with the Portsmouth Commonwealth’s Attorney "did not yield any action," she said.

Del. Don Scott, who's Lucas's attorney, said the investigation was flawed and dishonest. He noted that police watched and let the protestors vandalize the monument. They only stepped in after the injury.

Scott added that Lucas left the protest hours before some demonstrators began taking the monument apart.

"The senator was there at 2:30 pm approximately and she left within 15 minutes," Scott said. "So for the police to now to try to lay blame on the senator... that is despicable. It’s dishonest."

Stephanie Morales, the Portsmouth Commonwealth's Attorney, told The Associated Press that her office did not sign off on the police department's charges.

Claire G. Gastañaga, executive director of the ACLU of Virginia, told the AP that Virginia is one of the few states in which a felony warrant can be filed without a prosecutor’s approval.

"These charges are political, and I think they’re discriminatory," she said.

Greene’s announcement came a little more than two months after the protest against the monument. Protestors beheaded four statues and pulled one down with a rope. One demonstrator was severely injured when a piece of the structure fell on him.

In a city with racial divisions in politics, the monument had been a longstanding source of debate. Tempers over it flared in June amid a national outcry over Confederate monuments.

The vandalism immediately ignited outrage among some white Portsmouth City Council members who demanded a criminal investigation and charges against people who were involved in the incident.

Several of those charged on Monday were present at one point during the protest. However, it’s unclear who was there when the statues were beheaded.

Greene said her department is still investigating the incident and trying to identify other people involved.