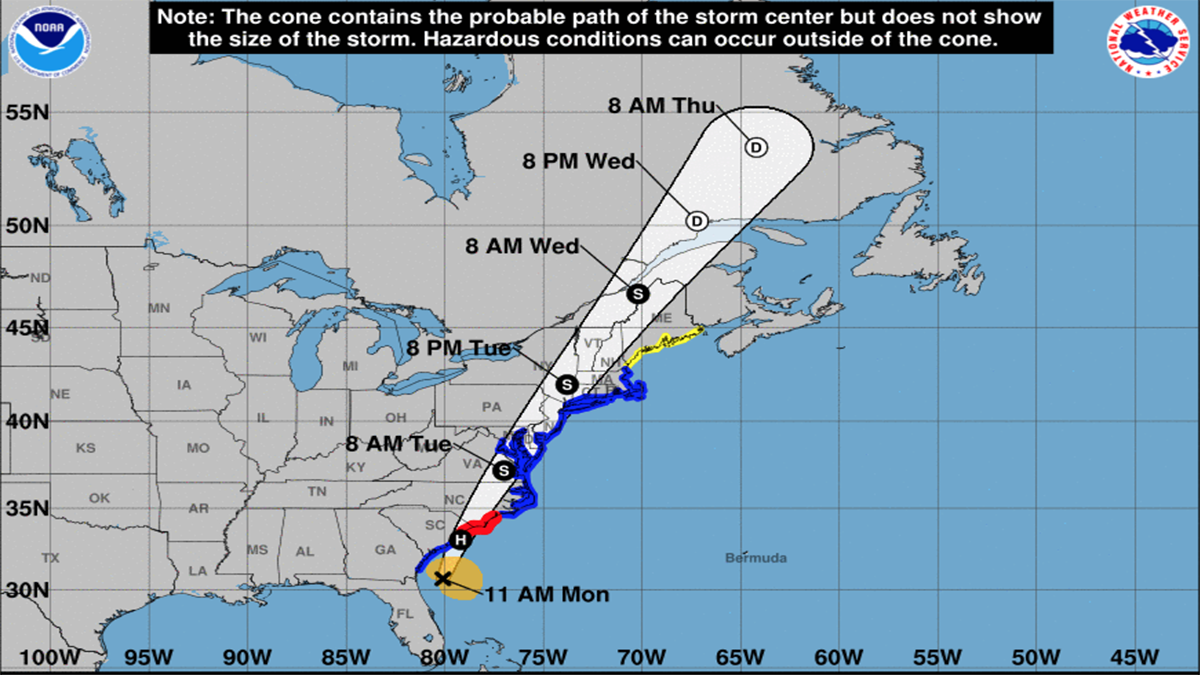 Photo courtesy of National Hurricane Center. Isaias has already slammed parts of the Carribbean and moved north along Florida's coast.

Isaias, which was upgraded to a hurricane Monday night, will bring heavy rain and wind gusts up to 70 mph to Hampton Roads Tuesday morning.

The storm made landfall in southern North Carolina at around 11 p.m. Monday, according to the National Hurricane Center.

The current forecast has the storm weakening back to a tropical storm before crossing over Eastern Virginia Tuesday.

Jeff Orrock, a meteorologist with the National Weather Service in Wakefield, said the center of the storm will likely track over parts of Williamsburg and Surry County. All of Hampton Roads will see tropical storm force conditions, he said.

“We’re getting some concerns now,” he said. “We could see some pretty strong wind gusts. I’d say 60 to probably 70 miles per hour are possible.”

Sustained winds will probably be around 45 mph, Orrock added. They will start early Tuesday morning and last until around 11 a.m.

Hampton Roads could also see 2-6 inches of rain, with the heaviest rain in the west. Tornados are possible in the region beginning late Monday evening.

Conditions will improve quickly Tuesday afternoon as the fast-moving storm heads into Maryland.

Much of the eastern seaboard is under a tropical storm warming. Gov. Ralph Northam has declared a state of emergency to free up resources to respond to the storm.

Isaias has already slammed parts of the Caribbean and moved along Forida’s east coast. It has strengthened thanks to unusually warm Atlantic Ocean waters caused by climate change. However, meteorologists say dry air and wind shear have prevented it from becoming a more major storm.

“The morning commute could be fairly dangerous,” he said, noting the wind will be especially strong on bridges. “It’s just going to be a really rough morning.”

Norfolk officials say the city’s clearing out street drains and ditches to prevent flooding. In Williamsburg, city workers are picking up public outdoor tables and chairs.

Forecasters have been unsure of Isaias’ track and strength at times. But Orrock said the forecast for Virginia isn’t expected to change much.

Local authorities have not issued any evacuation orders. However, a Virginia hurricane evacuation guide can be found here.