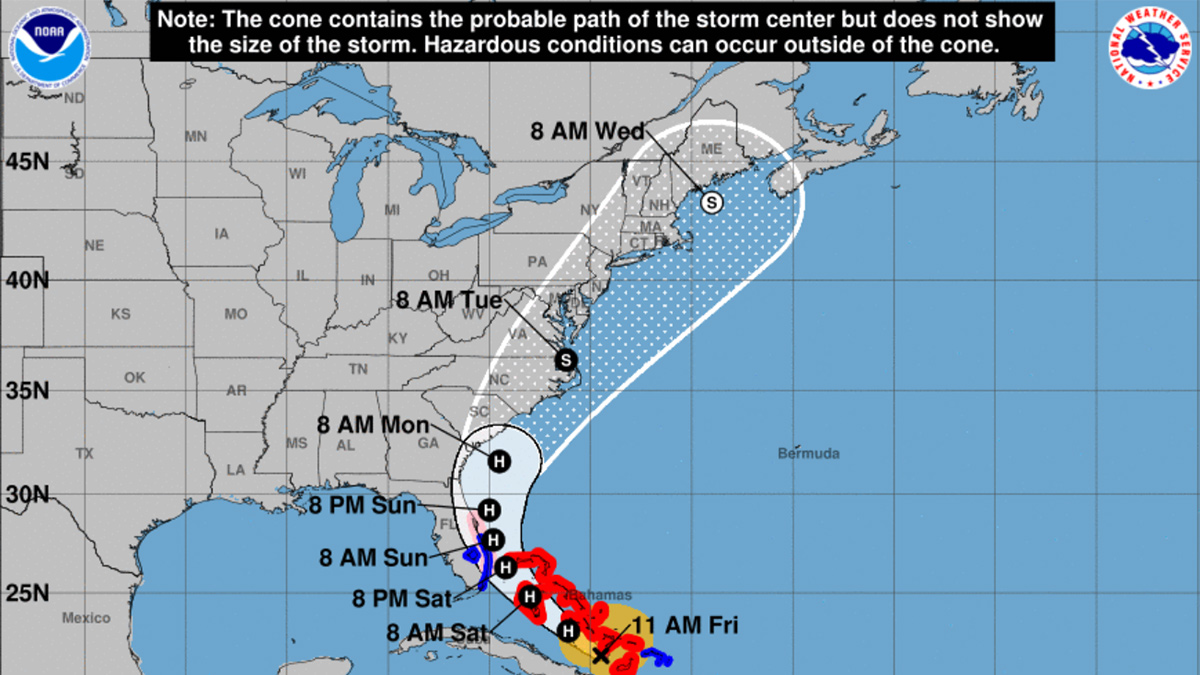 Photo courtesy of National Hurricane Center. Isaias' impact on Eastern Virginia could depend on how much it weakens and whether it stays offshore.

Isaias continues moving north up the eastern seaboard and is expected to begin impacting Hampton Roads Monday into Tuesday.

According to the National Hurricane Center, the storm is just off the northeast coast of Florida. It's predicted to regain hurricane strength before reaching the coasts of northeastern South Carolina and North Carolina.

It will then weaken again before bringing heavy rain to eastern Virginia Tuesday morning, according to the National Hurricane Center.

Flooding and tropical storm force winds up to 50 mph are possible in Hampton Roads and the Eastern Shore, said Jeff Orrock, a meteorologist with the National Weather Service in Wakefield.

By 5 a.m. Monday, Hampton Roads was under a tropical storm warning.

Gov. Ralph Northam declared a state a emergency late Friday afternoon to allow the Commonwealth to prepare resources for response and recovery efforts.

Forecasters have been uncertain about the storm’s track and strength from the beginning. It was projected to strenghten more thanks to unusually warm waters in the Atlantic Ocean caused by climate change. But meteorologists say the storm has been losing force as it encourters dry air and wind sheer.

Orrock says Isaias’ impact on Hampton Roads will depend on how much it weakens as it moves across North Carolina and whether it stays off the shore of southeastern Virginia.

“Trying to nail this storm down within a 12-hour window right now is pretty tricky,” Orrock said. “Folks should be keeping up with the forecast this weekend.”

In 2016, Hurricane Matthew battered parts of Hampton Roads with as much as 14 inches of rain. Orrock said Isaias will be weaker and cause far less damage than Matthew.

Still, he recommends that people tie down outside equipment. Boat-owners should also make sure their vessels are secure.

“Even though it may not be a huge impact for us, it’s going to be enough where it could cause some issues,” he said.