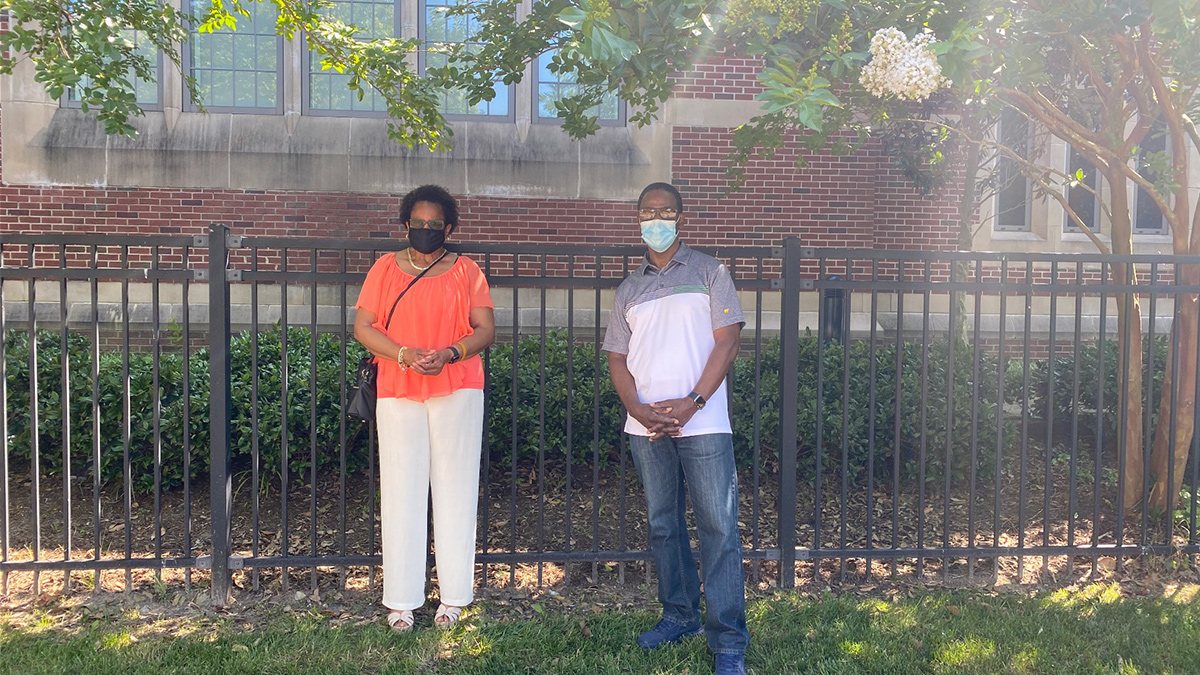 Photo by Sam Turken, WHRO. Michael Daniels and Carolyn Keen lived in East Ghent before the area was redeveloped.

‘It Was Horrific’: Norfolk's Predominantly Black East Ghent Wiped Off The Map In 1970s

Carolyn Keen hasn’t been back to the site of her childhood home in decades. So when she walked around East Ghent one recent afternoon, she struggled to find where her apartment building once stood.

“Here was the church, and our apartment was probably less than a block beside the church. Wasn’t it?” she asked Michael Daniels, her former neighbor, who joined her on the walk.

“No. You would have been right here,” Daniels responded.

The street Keen lived on is now an alley that connects several houses. There’s a new church building where her house used to be.

Keen and Daniels were among hundreds of Black residents forced out of East Ghent in the late 1960s and early 1970s. The city of Norfolk seized their homes through eminent domain, bulldozed the neighborhood and then built new expensive houses that make up the mostly white area today.

Many of the original Black residents were priced out and couldn’t return.

“It’s despicable what they did to us,” Keen said.

The current families will receive housing choice vouchers to find somewhere else to live. The federal government is helping paying for the project with a $30 million grant.

Black people who were displaced in Norfolk in the 1900s by racist housing policies fear St. Paul’s will become another East Ghent.

“It’s almost as if they’re saying, ‘If you are at or below poverty, we don’t want you,’” said Daniels, who’s now the pastor at Enoch Baptist Church in Virginia Beach.

“The City and [the Norfolk Redevelopment and Housing Authority] have learned from the past and are enacting best practices to provide ultimate choice and opportunity to the residents of St. Paul’s,” city spokeswoman Lori Crouch said.

‘The Most Derisive Word’

East Ghent used to be about a 90-acre area that was bordered by Granby Street, 21st Street, Colonial Avenue and Olney Road.

Around the 1940s and 50s, Black families moved into the neighborhood as many white people fled to the suburbs. The area looked a lot like much of Ghent today with red brick apartment buildings and homes with Victorian architecture.

Daniels and Keen lived there for a few years when they were children. They described it as a close community where kids roller-skated and played in the streets. Parents reprimanded each other’s children as if they were their own daughters or sons. And everybody shared possessions.

“If one person had something, you played with it as if it was yours. In my apartment building, it was nothing for me to climb from my balcony and jump on the balcony next door and take their toys and play with them and then put them back,” Daniels said.

Cassandra Newby-Alexander, a dean and history professor at Norfolk State University, said the city began repeating what it did with other predominantly Black neighborhoods throughout the 1900s. Norfolk stopped providing East Ghent with basic services.

White landlords converted smaller homes into apartments and then packed Black families in. They then stopped maintaining them. Other vacant homes grew abandoned.

“It was perhaps the most derisive word used. And it tended to blame the people in the neighborhood for their own conditions,” she said, noting that white lower-income communities didn’t experience such problems. The city maintained white neighborhoods, she said.

Norfolk already had a history at the time of neglecting Black communities, bulldozing them and displacing residents.

In the 1950s, the city tore down an area called Atlantic City. The goal was to prevent a local school there from integrating. Racist city leaders resisted school desegregation after the United States Supreme Court mandated the practice in 1955.

Norfolk City Councilman Paul Riddick and his family lost their home as part of the Atlantic City project.

“927 West Onley Road,” Riddick said, referring to his address. “You had a string of businesses there, grocery stories, gas stations, restaurants.”

The Black families in East Ghent were next.

City officials repeatedly told the families they would be able to return to new affordable housing in the redeveloped neighborhood. Instead, upper middle class homes were built to expand the city’s tax base. Most Black residents couldn't afford to come back.

“I would cringe now at some of the things that I saw going on,” Waters Yarsinske said.

“It was horrific because of the way they treated the people living in the neighborhood,” added Michael Daniels, the former resident. “Your next-door neighbors were like a part of your family. It’s like you’re losing a family member.”

Families had to find new homes across Hampton Roads. People who worked around East Ghent and didn’t have cars also had to search for jobs that were closer to their new homes.

Daniels, who’s family settled in Portsmouth, said many people experienced improved living conditions after the move. Carolyn Keen, the other former resident, said her family found a house around the better-maintained Lakewood neighborhood.

But Daniels also knew several people who never recovered and have since died. They struggled with drugs and crime after moving.

“The social implications of displacement are staggering,” he said. “When you disperse people and put them in different neighborhoods and you move them away from their culture and from that background, it does have a psychological effect on people.”

The project is underway and is expected to take about a decade.