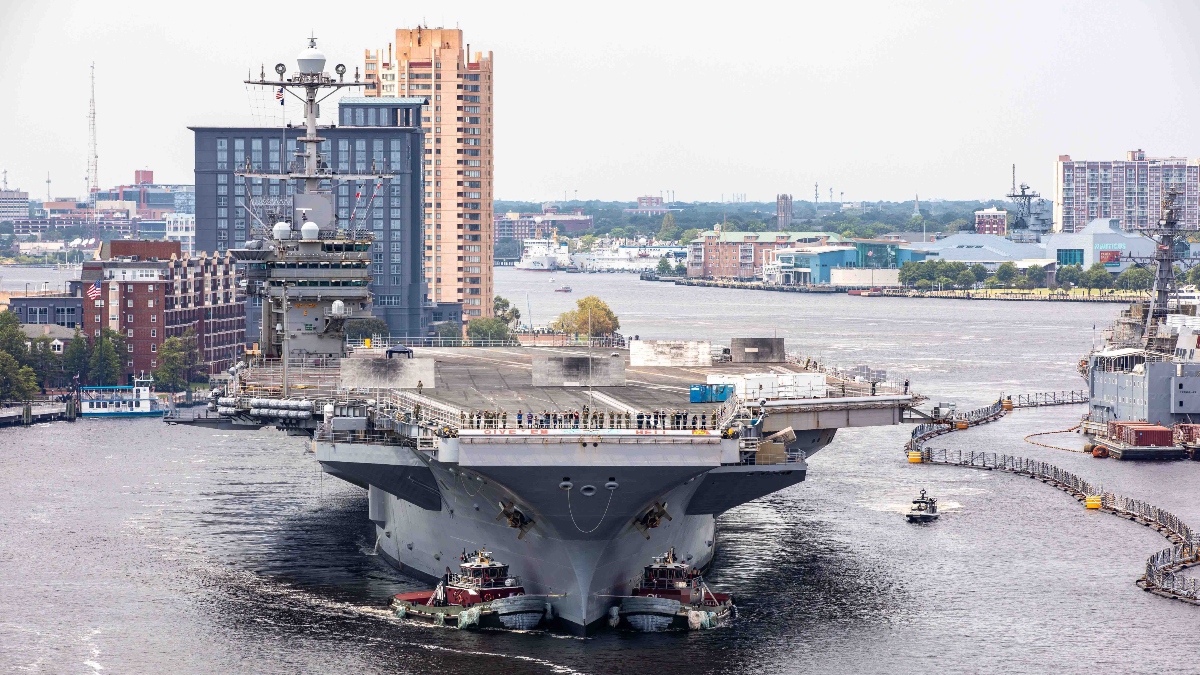 Photo from the U.S. Navy. The Atlantic Coast Pipeline would have brought more gas to Hampton Roads to help with military and defense industries, among others.

WHRV’s Paul Bibeau and Sam Turken contributed to this report

Kim Sudearth has been organizing opponents of the Atlantic Coast Pipeline in Hampton Roads for years.

The project, funded by Virginia’s Dominion Energy and North Carolina’s Duke Energy, seemed predatory, she said, with a route running through predominantly Black and low-income communities.

Sudearth, who is an organizer with Mothers Out Front, said she couldn’t see the need for such a project when Dominion must generate energy only from renewable sources -- like solar, wind and water -- by 2045.

“Based on information that we have, the actual forecast for energy has pretty much remained flat,” Sudearth said. “So the question is, well, why would they continuously build pipelines and compressor stations?”

Dominion justified the project’s termination point in Hampton Roads by saying the area’s industries, like the military, faced chronic natural gas shortages. Natural gas is a raw ingredient in things like plastics and is the only way in many cases to dry and melt industrial sized materials, like pieces for ships.

Dominion’s claim that the region didn’t have enough access to natural gas was long disputed by environmental groups that opposed the project and now that the project is cancelled, others are saying those frequent natural gas shortages Dominion referenced rarely happen.

“We have often found over the years … that industry takes a very aggressive approach to what they consider to be their needs for their future,” said Peggy Sanner, executive director of the Virginia chapter of the Chesapeake Bay Foundation. The organization opposed the pipeline.

“And it is quite often the case … that the needs are not as large as they originally thought.”

The Atlantic Coast Pipeline was going to run from West Virginia, through Virginia and into North Carolina, with a termination point in Chesapeake that would serve as a connection point for the rest of Hampton Roads. Virginia Natural Gas would pay Dominion to use the pipeline and deliver the energy to gas customers.

The pipeline faced legal battles from environmentalists and permitting delays for years. According to Dominion and Duke Energy’s statement announcing the cancellation, those delays pushed the cost of the project from $5 billion to $8.5 billion and created an “unacceptable layer of uncertainty” for the company.

Proponents of the pipeline said the cancellation is really an economic development loss for Hampton Roads.

“The region’s current infrastructure is severely constrained, and there are chronic gas shortages during the winter,” Dominion spokesperson Aaron Ruby wrote in an email. “Utilities have to interrupt service to major industries and military bases on cold winter days.”

Jim Kibler, president of Virginia Natural Gas, said that has happened 47 times since 2007.

Those curtailments, as they’re called, don’t affect just 47 customers. It affects dozens of companies at once.

“47 curtailments means 47 times that the largest employers in the region were either furloughing their employees or they were switching to a less environmentally friendly fuel like propane or oil,” Kibler said. “So there's an economic and an environmental consequence to every time we interrupt or curtail those customers.”

A spokesperson for the Port of Virginia said the pipeline’s cancellation has little effect on operations there. Huntington-Ingalls shipbuilding declined an interview request about the pipeline.

A spokesperson for the Naval Facilities Engineering Command said the Navy is “confident that its facilities will continue to meet their mission requirements.”

Kibler said issues with energy delivery is a consideration for businesses that may be looking to locate in Hampton Roads -- and if they can’t be sure they have an energy source at all times, they may look to a different place.

The challenge is especially pertinent if the federal government chooses to pursue Base Realignment and Closure proceedings, said Craig Quigley, executive director of the Hampton Roads Military and Federal Facilities Alliance. The group advocates for retaining and creating more federal facilities in the region.

Quigley said for now, it seems unlikely, since BRAC isn’t currently included in federal legislation. But if it does come up, he suspects energy sufficiency will be a consideration and access to uninterrupted service could be important.

Industry says it's fine for now

For now in the military, Quigley said, “the interruptions are few. And I would describe them as more annoying than actually mission critical. The installations have figured out workarounds and mitigation techniques over the years to handle these infrequent interruptions.”

Without a new source of natural gas coming to the region, Dominion can double-down on alternative forms of energy, like the offshore wind project under construction off the Virginia Beach coast, Sanner said.

“We obviously can't be anti new fossil fuel infrastructure and not believe that there is an alternative,” Sudearth said. “There is and Dominion knows this, it's renewable. It's investing in renewables, which they're already doing. There's plenty of ways that we can continue to meet the demands of our growing energy needs and do it sustainably.”

Dominion officials said offshore wind isn’t as reliable as natural gas and would limit service even more so than gas does.