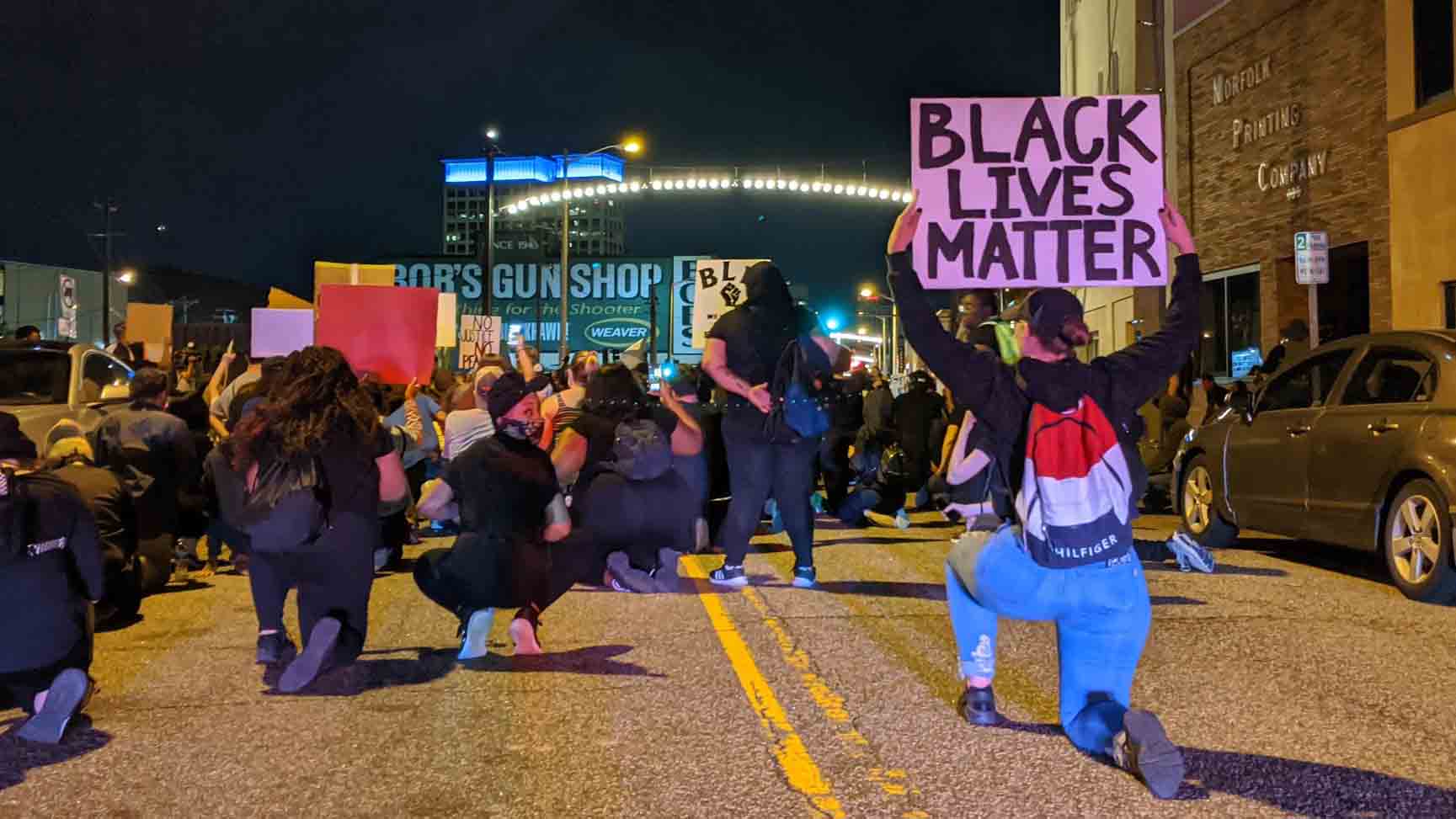 Photo by Rebecca Feldhaus Adams, WHRO. Protesters in Hampton Roads held some marches Memorial Day weekend and have had several marches since then.

Protests in Hampton Roads started up again over the Fourth of July weekend.

A group of Virginia Beach residents plan to keep the momentum going and will march to the city’s next council meeting on July 14.

WHRV spoke with Damien Stennett, one of the organizers about what they’re asking for. The interview has been edited for clarity.

Mechelle Hankerson: Hi Damien, thanks for talking with us.

MH: There have been quite a few protests in Virginia in the last few weeks. What is this upcoming one about?

DS: Past protests have been in in support of the Black Lives Matter movement. I'm in support of Black Lives Matter, of course, but my biggest effort is I want to push action as well as protest. Because I feel like if you protest without making any demands, or protest without action, during or after the protest, action being, you know, talking to the legislators, making demands to city legislators to change the legislation to make change, then it's not even a protest. It's just walking. The main reason of this protest is we're pushing for a citizen's and-or third party review board for Virginia Beach Police Department. We learned that Virginia Beach Police Department reviewed themselves, so if you file a complaint, they review it. It's really biased and it makes no sense. With that being said, I feel like there needs to be citizens review board. Citizens definitely have a right to know how they're being policed. They deserve to have a say in how they're policed.

MH: Are there any other changes you would like to see?

DS: There's a lot of changes I'd like to see. But like I've said before, this is a marathon, not a sprint. So we're taking it one step at a time. I kind of compare it to - not saying I compare myself to - but I compare it to the civil rights movement back in the '60s. We tackle one change at a time, like civil rights and then they tackled integrated schools. We're tackling one thing at a time to make an overall effective change.

MH: For people who wonder why these changes are needed, or why there are protests, what would you say to them?

DS: If you claim to love this country as much as you do, then you should be critical of it, you know. You should always be seeking improvement and how to change it. And with that being said, America has, for a long time just downplayed the fact that Black people in this country aren't treated fairly. Sure, we're not openly treated as if we were, say, the Jim Crow era or say, civil rights or even slavery, but the fact of the matter is we have to fight for justice for the deaths of our fellow Black people every time something happens. The fact of the matter is Black people in this country are not treated fairly.

MH: That's Damien Stennett, one of the organizers of an upcoming march to the Virginia Beach City Council meeting on July 14. Thanks for your time, Damian.

DS: Thank you so much for speaking to me.