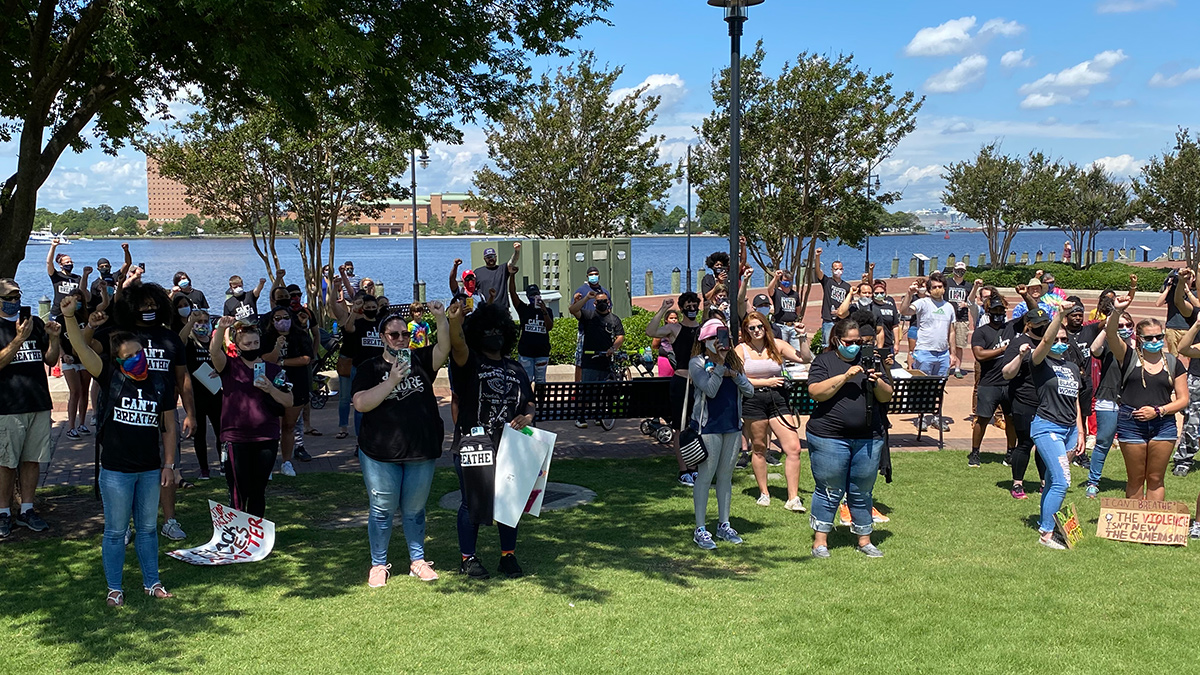 Photo by Sam Turken/WHRO. Attendees at a Norfolk Juneteenth rally hold their fists up in solidarity for racial justice.

‘Still Being Oppressed’: Demonstrators Rally Against Systemic Racism In Norfolk On Juneteenth

At least 75 people rallied in Norfolk’s Town Point Park Friday on Juneteenth before marching across downtown.

Donning black shirts and holding signs that read, "Equality For All," the demonstrators decried systemic racism and police brutality. At one point, they raised their fists in the air in solidarity for racial justice and said people need to work together to promote equity.

"If you see someone down, the best thing you can do is take that hand that you have balled up into a fist, open it up into a hand, reach down and grab somebody and lift them up," Norfolk pastor Mike Harris told rallygoers.

Juneteenth commemorates the end of slavery. This year’s holiday comes amid a national reckoning over race relations and law enforcement tactics following multiple police killings of black people across the country.

During Friday’s rally, Bruce Smith — the Norfolk native and NFL Hall of Famer — noted he experienced segregation when he was young. The racism that’s currently prevalent in society reminds him of the limited progress made since the peak of segregation, said Smith, who’s black.

"Fifty years ago, Dr. [Martin Luther] King was fighting the same fight for social justice and equality. And here we are 50 years later, and it seems like we have taken a step back into 1960. This is very disturbing," he said.

The rally and march were organized by Russell Gilbert, owner of The Dirty Buffalo restaurants in Norfolk and Virginia Beach. He said he refused to stay silent about issues like racism and police brutality.

Gilbert, who’s white, acknowledged he grew up privileged and has not experienced the challenges black people routinely face. He hasn’t worried about getting killed by a police officer during a routine traffic stop. He doesn’t have to tell his kids what to do when confronted by law enforcement.

But he said he wants to educate his children, ages 6 and 3, about systemic discrimination and use his platform to promote change.

"We’re all in this right now. I wish I could say I understood, but I don’t. I don’t know what it’s like," Gilbert said.

DeLisa Konefal attended the rally with her two sons, ages 12 and 7. She said in addition to police reforms, changes to education funding are necessary to begin the process of addressing systemic inequality.

"It’s overwhelming the disparaging between the two," she said. "We’re celebrating Juneteenth when slavery ended, but we’re still being so oppressed by social injustice."