Photo by Paul Bibeau, WHRO. A page from the Princess Anne County coroner's inquisition in the death of Thomas Elliott. The documents are part of a collection of coroners' inquisitions at the Library of Virginia. The items were shipped to the library from the city of Virginia Beach.

Across Virginia, crowds have damaged or destroyed Confederate statues. People toppled Jefferson Davis from his pedestal in Richmond and beheaded the figures of Southern soldiers in Portsmouth.

Virginia Beach authorities have wrapped their monument in black plastic and fenced it off while they consider its fate. The history behind that statue is about more than just the Civil War. It's tied to the rise and persistance of white political power in the area... and a murder.

On July 20, 1904, some 4,000 people gathered around the courthouse in Princess Anne county to hear stories, speeches, music and to give money.

It was a reunion of the Confederate veterans of the county and their supporters. One veteran, a politician named Oswald Bailey (O.B.) Mears, was a key organizer of the event. His aim was to build the monument that stands there today. 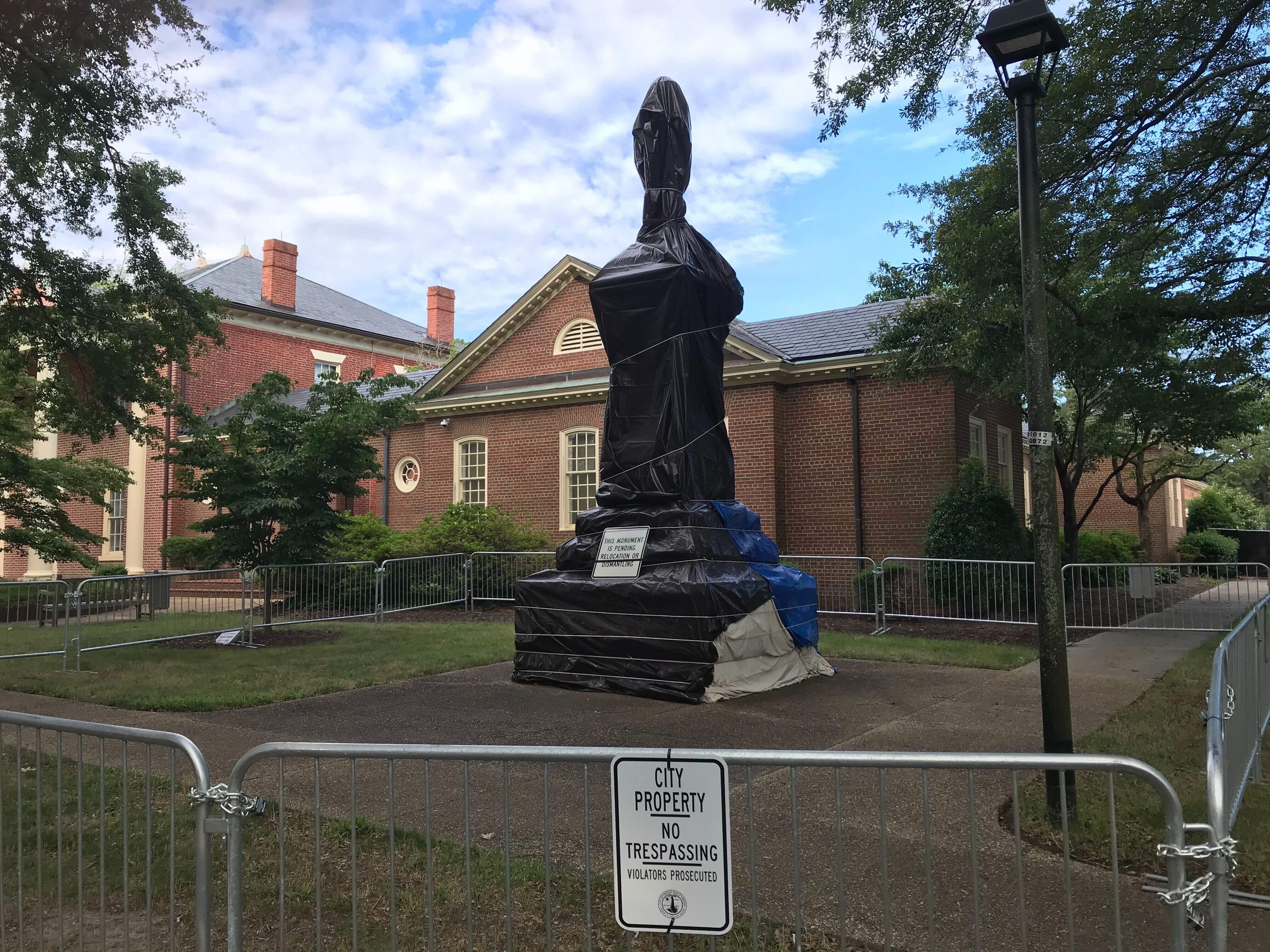 Mears had become a prominent community figure by that 1904 fundraiser.

But years before, he stood with other witnesses gathered around the body of a murder victim to give testimony to a coroner in a racially charged killing that happened on election night, 1878, in Kempsville. The events of that night were part of an effort by white political leaders to take power in the county in the years that followed, and by 1904 that control was nearly complete.

In many ways, the Confederate monument did not commemorate a lost cause. It was a victory monument to a political struggle that happened after the last Union soldier left the South.

The election night murder remains unsolved more than a century later. However, in the archives of the Library of Virginia in Richmond, there is testimony from those witnesses. Several of them identified the alleged killer and provided a compelling reason why authorities never reached a conviction. WHRO unearthed those documents. 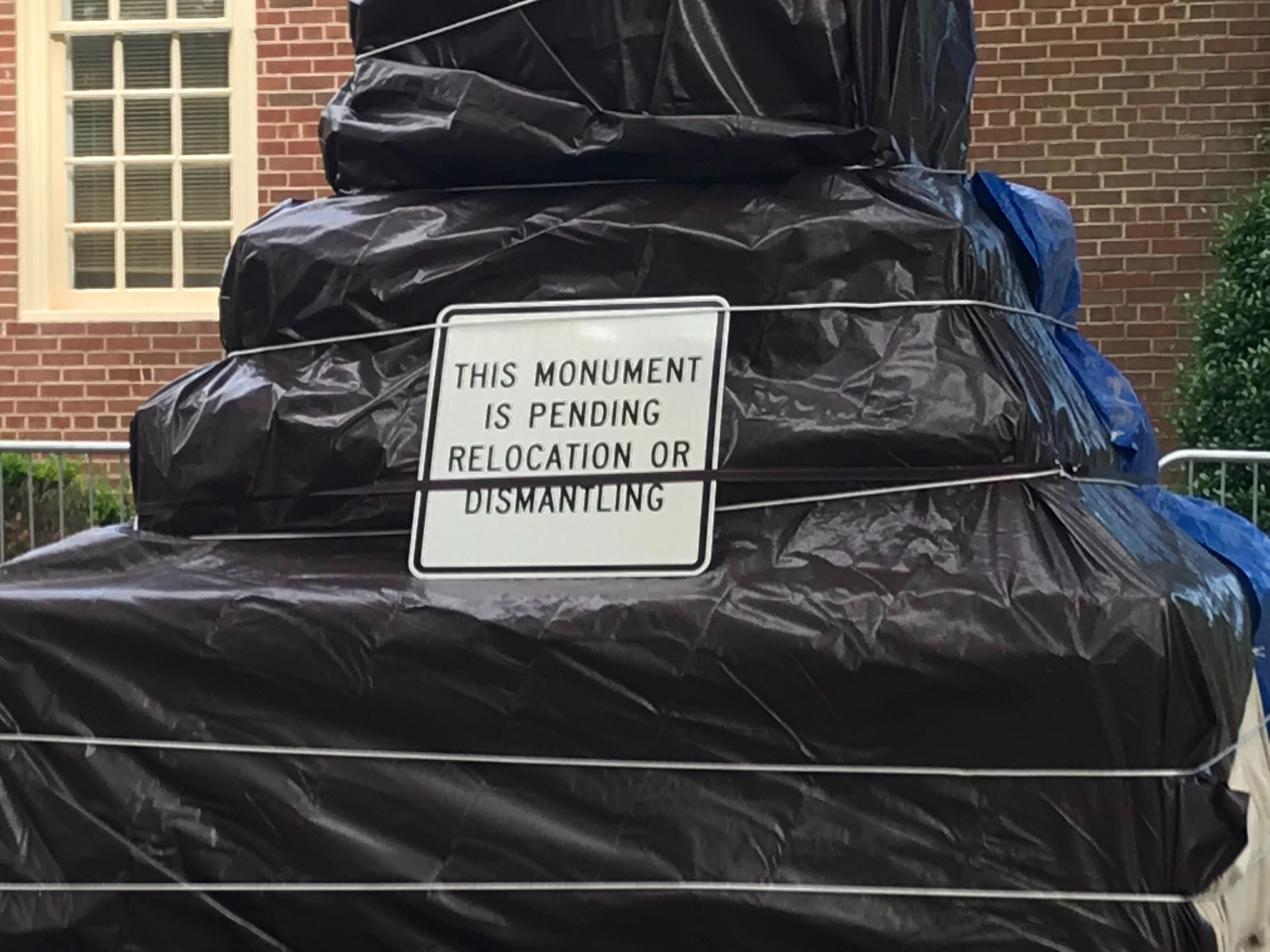 The November 6, 1878 headline on the Norfolk Virginian’s front page proclaimed:

The paper’s account was a mix of true details, misunderstandings and omissions. It blamed the violence on a personal argument between two people over a hunting rifle; that event did happen, but it did not cause the events of the night. The paper also misidentified the victim as man a named Abraham Elliott, who was known as a troublemaker.

In truth, the victim was a black preacher named Thomas Elliott. The coverage created the impression that the election violence was a meaningless, criminal act. Witness testimony would later show this was almost certainly not true.

As the days passed after the election, and as the coroner was collecting witness statements, the tension mounted, and another man was killed. Rumors spread that black residents were planning an attack. The sheriff deputized an armed guard from the citizens, and one night a guard mistakenly shot and killed another.

Eventually authorities arrested the leaders of the black political group at the election, Noah Lamb and Willis Hodges. A grand jury brought charges against Lamb, Hodges and a half dozen others for crimes that included the nonfatal shooting of a white man at the scene. No one brought a prosecution for the killing of Thomas Elliott.

As soon as the case came to trial, prosecutors dropped all charges against Hodges and Lamb in exchange for an agreement that they would leave the state forever.

The local paper didn't explain why authorities dropped the matter.

The reason the case died may have been contained in the written statements the coroner had collected, now in the Library of Virginia. After interviewing the witnesses, the coroner had an account of a crime which would have worsened the controversy around the violent November 1878 election in Kempsville.

Witnesses agree that a story had spread that black people voted for the Democrats, the so-called "white ticket." A white man started a heated argument over it with Willis Hodges in front of the polling place. During this loud exchange, witnesses said Hodges declared that the black man who’d voted for the white ticket ought to be “hung or in Hell.” The white man countered that black people in the county ought to remember who gave them their living.

It was this sharp talk about what white people owned, and what black people supposedly owed them, that escalated into a fight with clubs and firearms. The fight spread throughout the village, according to the coroner’s report.

And later that night, three witnesses saw a gray-white horse near the scene of the fatal shooting. Two of them saw the rider who fired at Thomas Elliott.

One witness identified the shooter by name: Dr. O.F. Baxter, he told the authorities, rode into the crowd of black people on that horse.

“Leave Kempsville,” Baxter shouted at the crowd, according to the testimony, “Every one of you damn sons of bitches.” The witness said Baxter then rode up to the fleeing Thomas Elliott and felled him with a shot in the back.

Not everyone agreed with this testimony. A white doctor said the dead man had been shot from the front. Accounts differed on important matters.

But who was Baxter, and what was he doing there that night?

O.F. Baxter did not testify to the coroner, even though a constable served him with a summons to appear at the inquest over the body of the deceased. His son, Wiley Baxter, did testify however, and explained a crucial fact: Wiley Baxter was a judge in Kempsville during the 1878 election.

And people charged that the election was being stolen.

A reporter from the New York Tribune traveled to Kempsville and wrote two investigative articles about election fraud during the 1878 contest. He accused Princess Anne officials of ballot stuffing and intimidation. He described how black people had to cast their ballots through a window on the outer wall, seven feet off the ground to conceal the fraud. The article also accused the local sheriff of pressuring witnesses afterward to keep them quiet.

The Coroner’s Report And What It Tells Us

The report of the Princess Anne coroner’s inquisition has important details about race, politics and violence that go beyond this case.

This election was an intense fight for power at a crucial moment in American history, right at the end of Reconstruction. People feared the fighting would spread, and a charge that the killer of Thomas Elliott was the father of one of the election judges might have intensified that violence. Instead, prosecutors dropped the charges, and the coroner’s report went into a court file for a century.

O.B. Mears, who was on the scene in 1878 -- and who would one day help erect the Confederate monument -- was right in the center of this larger conflict for power. Willis Hodges had been a successful politician and local judge in Princess Anne until O.B. Mears had him removed from office under charges of corruption. In the years after, Mears served as superintendent of Princess Anne schools. A news report during his tenure described his role helping to select books on Virginia history for students.

The banished political leaders, Noah Lamb and Willis Hodges, eventually came back to Virginia. Black politicians continued to run for office, but over the next two decades the white-dominated Democratic party worked to disenfranchise black voters.

By the time the Princess Anne monument stood at the courthouse, white leaders were so successful at voter suppression that they’d reduced the entire Virginia electorate by half.

The American Historical Association said the purpose of monuments like the one in Virginia Beach was “to obscure the terrorism required to overthrow Reconstruction, and to intimidate African Americans politically and isolate them from the mainstream of public life.”