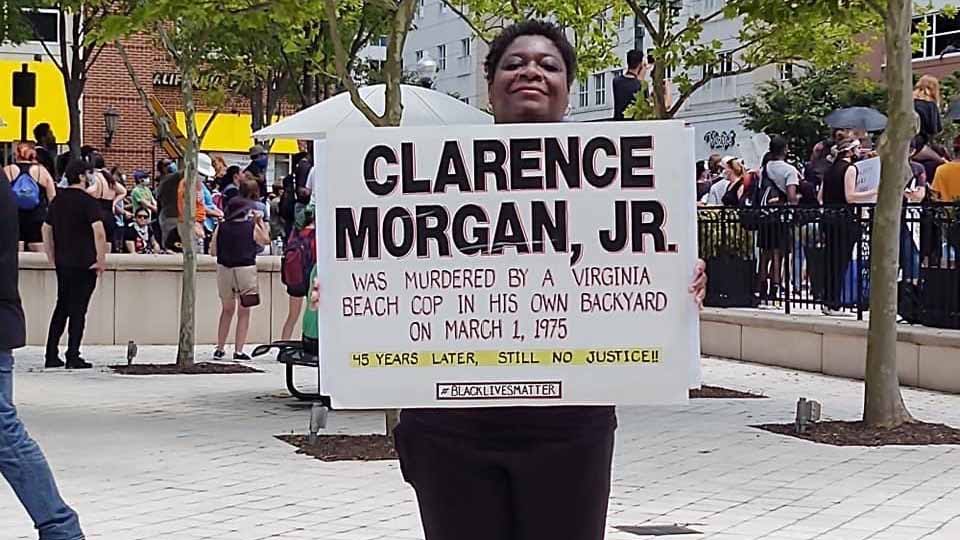 Photo courtesy of Vonda Munden. Vonda Munden made a sign to carry at protests to bring attention to the death of her relative, Clarence Morgan, Jr.

Clarence Morgan Jr. was the son of a Baptist pastor, a longshoreman and father to three children.

He was also a black man shot and killed in his backyard by a white police officer in 1975.

No one was ever charged for Morgan’s death. The Commonwealth’s Attorney at the time issued a report to City Council that ruled Morgan charged an officer with a knife, a claim the family still denies 45 years later.

With people focused on the relationship between black people and police officers across the country, Morgan’s daughter, Alethea Morgan Morris, is considering reopening the case.

“Justice was never served, and I never want the memory of my father to die,” Morris said. “Every time there's another minority who suffers police brutality, it reminds me of that. It's a sore spot when you see it's been 45 years since that happened, and it's still going on today.”

Vonda Munden was eight years old when Clarence Morgan was killed, just one year older than his daughter. Several of Munden’s family members are distant cousins and relatives to the Morgans, but have relationships more like close immediate relatives.

In recent marches and protests in Virginia Beach, Munden has carried a sign that reads “Clarence Morgan, Jr. was murdered by a Virginia Beach cop in his own backyard on March 1, 1975. 45 years later, still no justice.”

“I'd never forget that night when it happened,” Munden said. “The screams, and hearing my mother screaming, ‘Oh my God, they shot Clarence Morgan!' And the anger and the tears.”

Munden grew up in Virginia Beach and says she had several negative experiences with officers as a teenager in the 1970s and ‘80s.

But she said she thinks the department has improved and believes they would approach the Morgan case differently now.

“I think this is the time to do it. Because it was swept under the rug so quickly back then,” she said. “I think that's the right thing to do. And we have a better chance of having that done now.”

"He got a vacation for killing my father"

Clarence Morgan came from a family of black community leaders in Virginia Beach.

His father worked closely with Martin Luther King Jr. and his family built the church that still anchors the historically black Seatack neighborhood.

Morgan himself was well-known in Burton Station, another historically black enclave. He was a longshoreman who made time to help his neighbors.

On the evening of March 1, 1975, Morgan’s wife, Naomi Morgan, called for medical help because he was having a bad reaction to medicine he took earlier in the day.

According to a story printed in The Virginian-Pilot in April 1975, then-Commonwealth’s Attorney Andre Evans told City Council Clarence Morgan had been at the hospital for “serious delusional symptoms” and had been “emotionally upset” in the week leading up to his death.

According to Evans’ report, Morgan was kneeling over the family dog, appearing to get ready to injure the dog with a knife. Nicholson asked Morgan what he was doing and when he asked him to drop the knife, Morgan “arose and began advancing rapidly on the officer with the knife held out in front of him in what appeared to be a threatening manner,” The Pilot news story reported.

The Morgan family said they never saw the knife the police said Clarence had. The family’s dog was fine.

“It is clear that Evans accepted everything Nicholson said as truth while ignoring everything the Black witnesses saw,” the family wrote in a pamphlet calling for a reopening of the case in 1975.

After the shooting, residents of Burton Station ran officers out of the neighborhood and set fire to a police car. Evans claimed at least one white person that wasn’t involved in the incident was pulled from his car and beaten.

The 1975 news story noted Evans used his report to criticize that reaction, a fact the Morgan family shared in its pamphlet about Clarence’s death.

“A great number of people were concerned about Clarence Morgan … as we all were,” Evans said, according to the Pilot story. “No one, however, voiced concern about arson, robbery and the destruction of property.”

The Morgans wrote in their pamphlet that Evans' report was a reminder “of how the white Virginia Beach power structure views the black community.”

Ultimately, Nicholson was suspended with pay for a week.

“Basically, he got a vacation for killing my father,” Morris said.

Residents of Burton Station marched and protested regularly for months after Morgan’s death, hoping the city would reopen the case.

It took Morris, who was only seven when her father was killed, several decades to feel the same anger her community did 45 years ago.

“It wasn't until I reached the age of 30, I got really angry. Because it was at that point, I realized my father's life was taken at the prime of his life,” she said. He missed his three children graduate high school, go to college and start their own families, Morris said.

Morris has considered all sorts of avenues to get legal eyes on her dad’s case again. In the 1990s, she even considered contacting Johnny Cochran, the well-known defense lawyer for former football player O.J. Simpson in a murder trial.

By the time Morris got the nerve to reach out to Cochran, he had died.

Morris Morgan knows reopening her father’s case can’t bring him back, but it would force accountability where the family felt they received none.

“It may not help me, but it may help somebody else,” she said. “It may help another person from getting gunned down for no reason.”

Munden and Morris said they think city officials now would handle the case differently than it was handled 45 years ago.