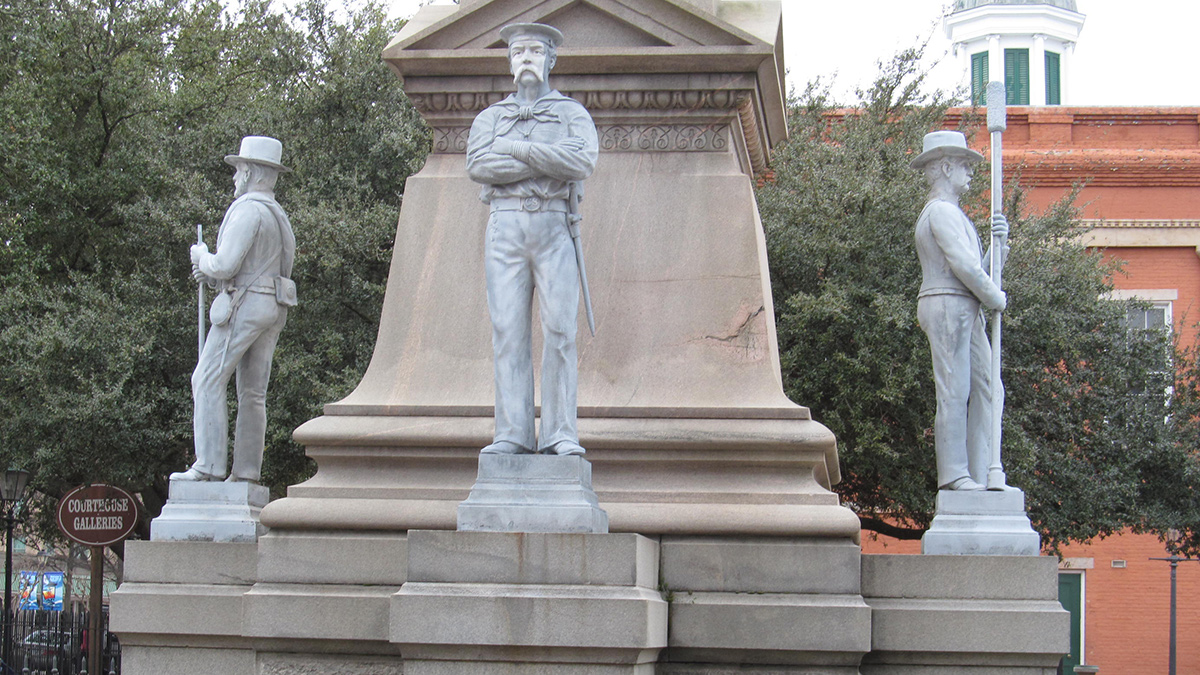 Photo by Doug Kerr/Flikr. Portsmouth's Confederate monument before it was vandalized Wednesday.

While other cities including Norfolk and Richmond have said they will take down Confederate monuments amid a national outcry over system racism and police brutality, Portsmouth officials have not said what they plan to do with their statues.

In response, protesters on Wednesday evening beheaded the four statues at the intersection of Court and High Streets. They then pulled one completely down. A demonstrator was severely injured in the process, and he was transported to the hospital.

The Portsmouth City Council held a virtual meeting Thursday night to discuss the vandalism. Mulitiple council members called for a state investigation of the incident and suggested that people involved should be prosecuted because there was an injury.

"We need to consider that a crime scene," said Councilman William E. Moody, Jr., a strong supporter of the statue. "I think our part of the investigation should be to seek to identify the persons that were doing the damage."

Vice Mayor Lisa Lucas-Burke pushed back against the focus on the vandalism. She said the council should concentrate on removing the statues.

"The city of Portsmouth and its residents have endured the visual pain for reminder of this monument long enough," she said, adding that the city should cover the three remaining statues for now.

The city council did not provide any additional clarification about the fate of the monument — other than noting that a 10-foot fence will be constucted around it in the coming days.

Reporter Ana Ley has been covering the story for the Virginian-Pilot. She joined WHRV’s Sam Turken to discuss the issue.

Sam Turken: Ana. Thanks for coming on.

Ana Ley: Yeah, thanks for having me.

ST: So first, can you tell us a little bit more about the scene yesterday? What happened?

AL: Well, it was a really hectic day. I kind of ran out there late afternoon. And eventually people started kind of tagging the monument, spray-painting it. And throughout the course of the night, protesters started actually, you know, breaking the thing apart. And eventually they beheaded these four statues that kind of surround the obelisk and pulled one of them down using a rope. Unfortunately, a protester was injured pretty badly. And that's kind of when things started to disperse for the day.

ST: Yeah. And how many people were out there? There was a band playing. What was that like?

AL: You know, it's hard to get a crowd estimate just because people were coming and going, you know, the entire day. But I think it would be pretty safe to say there were several hundred people out there.

ST: OK. You've reported also that the monument sits at a site where slaves were once punished on a whipping post. Were protesters bringing that up? And was that really one of the causes for their anger over this?

AL: Absolutely. Yeah. I mean, this monument has been a point of contention for a really, really long time. In Portsmouth, this is a majority black city here in Virginia. And this site comes with a lot of trauma for the black community. And absolutely — it's definitely something that a lot of people were very emotional and very frustrated by last night.

ST: The police did allow the protesters last night to start tearing it down. Was there a reason why police allowed them to actually damage the statues?

AL: Yeah. So Police Chief Angela Greene told us that essentially there weren't enough officers, you know, to kind of keep it from happening. And she said she was kind of you know, she's worried about the safety of our officers. And she says that the priority for her department was to preserve life over property, essentially. You know, she was more concerned about keeping people safe. Once the protester was injured, that's when the cops kind of said, 'OK, this has to stop.'

ST: Some residents have been speaking out against what the demonstrators did. What are they saying?

AL: Some people actually came out yesterday to confront the protesters. And it got pretty heated a few times. Their main argument is that this monument doesn't honor the Confederacy. This monument honors those who were killed in the war. The monument literally reads, 'To our Confederate dead.' So that has been, I think, hard for a lot of opponents to believe.

ST: Obviously, the statues are now seriously damaged. What's the plan for them moving forward?

AL: That is up in the air. There's a lot of racial division in the city itself and it manifests itself, you know, in city council pretty often. And essentially the discussion was to determine what are we going to do with this monument. And at this point, it's not really clear what even can be moved."

ST: That was Virginian Pilot reporter on Ana Ley. Thank you again.