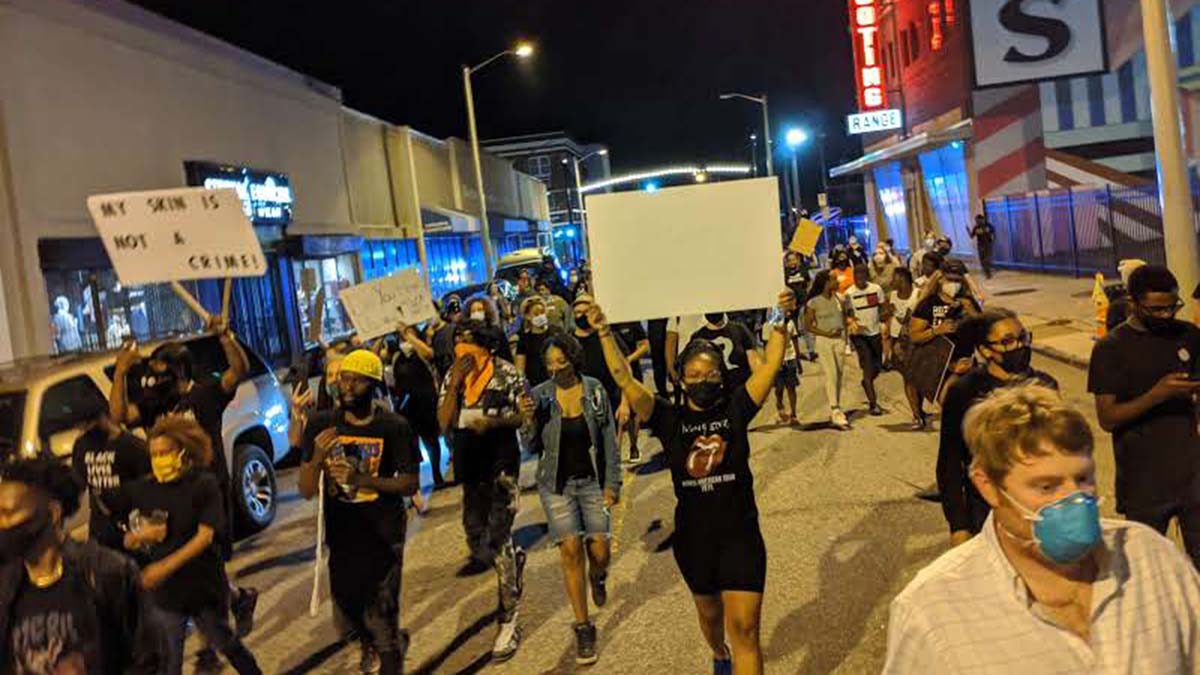 Photo by Rebecca Feldhaus Adams. The protestors chanted and waved signs while marching through Norfolk.

Demonstrators Peacefully March Through Norfolk In Response To Floyd Killing

More than 100 people marched across parts of Norfolk Tuesday night, protesting police brutality, racism and the killing of black Americans including George Floyd in Minnesota.

Chanting “no justice, no peace,” the protesters began demonstrating near a Confederate monument in downtown Norfolk before walking on Interstate 264, through the St. Paul’s neighborhood and Neon District and back through downtown.

Although the protesters blocked some traffic, the march was overwhelmingly peaceful. Police officers cordoned off most roads, giving the demonstrators free range to chant and wave signs. Nearby residents walked out of their apartments to cheer them on.

The protest was the latest in Hampton Roads in response to the killing of Floyd, a black Minneapolis man, while in police custody. The demonstrators on the Norfolk march said they were tired of racial inequality and police brutality.

“Silence is compliance. And an injustice to someone anywhere is an injustice to everyone everywhere,” said Jayne Thomas, an Old Dominion University student from Richmond.

Another woman, who declined to give her name, said she attended the march with her sons, the youngest of whom is 9. Any one of them can be the next George Floyd because they're black, she said.

“From the jump, we’re guilty because of the color of our skin. They inherited this. It’s almost as if it’s a death sentence. This doesn’t come off,” she said.

While police are enforcing curfews in Virginia Beach and Richmond in response to recent clashes with protesters, there is no curfew in Norfolk. And there have been no reported conflicts between Norfolk protesters and police since the demonstrations began last week.

Most demonstrators at Tuesday’s march were young. They held signs saying, "Black Lives Matter" and "My Skin Is Not A Crime."

One white protester who identified himself as Jake said he grew up privileged and wants to support the black community.

“I have been raised in a society that was meant for me to succeed. People of color do not have the same privileges that I do as a Caucasian individual,” he said.

Some protesters have attended other demonstrations over the past week. But Leon Hazluy said Tuesday’s march was his first since Floyd’s death.

He said he was there to do his part and create change.

“This is beautiful right here. It’s peaceful,” Hazluy said. “We’re not doing nothing to nobody. We’re just protesting. That’s our right.”