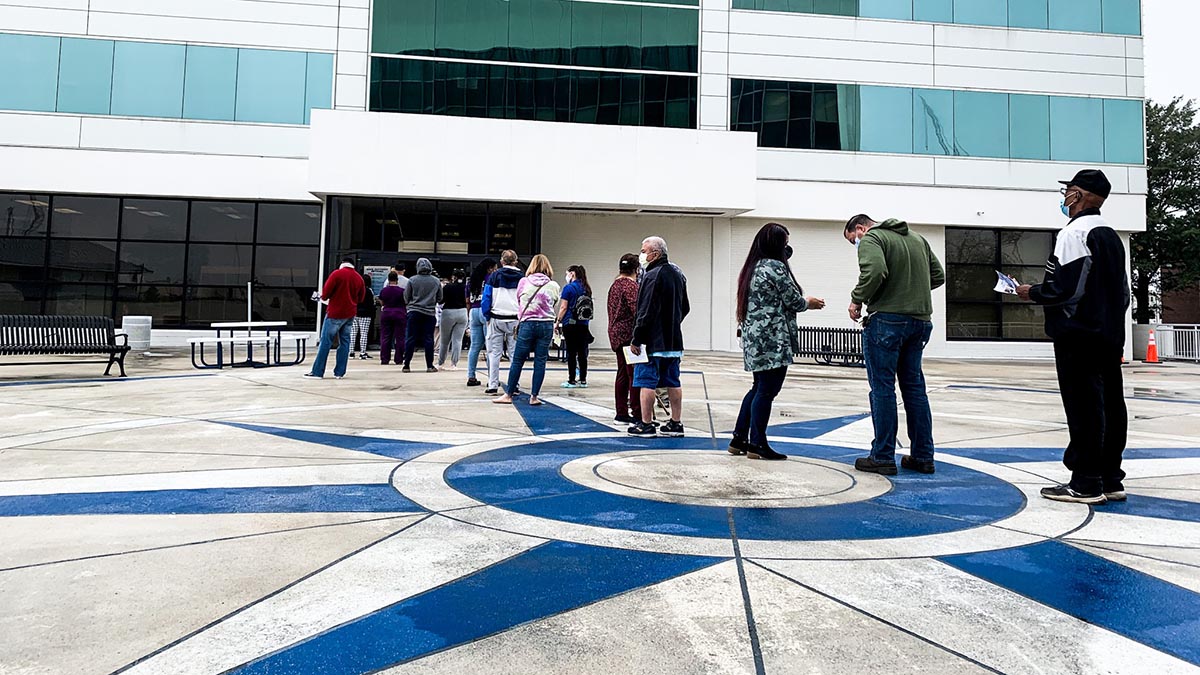 Millions of Virginians have already cast their ballots, but lines are predicted to be long this election day. Polls are open 6 a.m. to 7 p.m. Voters who are in line by 7 p.m. will be allowed to vote.

Redistricting Amendment Not Quite Top Of Mind

Most Newport News voters who talked to WHRO Public Media today said they didn’t know about the constitutional amendments on their ballots.

One of them, about redistricting, was partially inspired by a court case involving the city. Voters from part of the state and Newport News sued lawmakers and the Department of Elections for gerrymandering voting districts during the 2011 redistricting process.

The suit claimed lawmakers, who currently make the voting maps, illegally packed Black voters into certain districts. It diluted their voting influence in other districts.

The case went all the way to the U.S. Supreme Court.

This year’s ballot asked voters if the state should form a new commission with citizens and legislators to update voting maps.

Teresa Martin in York County was focused on the presidential election. She read up quickly on the amendment this morning.

“From what I read, it was too self-serving,” she said.

Newport News Democratic Del. Marcia Price agreed with her. She explained why she was against the amendment last month on HearSay with Cathy Lewis.

“This is eight citizens chosen by legislators and then eight legislators,” she said on the show. “So this is not giving power to the quote, unquote, people.”

In York County, the local Republican Party encouraged supporters to vote yes on the amendment.

The Democratic Party there took no official position.

Precincts across Virginia Beach continue to see steady turnout. There have been few lines this afternoon, and voters told WHRO's Sam Turken it took them just a few minutes to vote after arriving at the polls.

People are expressing a range of attitudes on the presidential race and current state of the country.

Howard Filer says he’s supported Democrats in the past. In fact, John F. Kennedy is his favorite president.

This year, however, he’s voting for Republican President Donald Trump. Filer says he likes the way things are going.

“I’m happy we’re not in any wars,” he says. “I think our economy is starting to roll a little bit...the COVID is being handled as well as you can handle a pandemic.”

Some voters -- like Shay Malone -- dislike both of them. Malone prefers independent third-party candidate Jade Simmons, who’s only on the ballot in Oklahoma and Louisiana.

“I wrote her in,” Malone says. “She has great ideas. Right now, I don’t think the Democrats or the Republicans are interested in really helping those in the country who need it most.”

There’ve been reports of voting problems at Virginia Beach’s Upton precinct. One person on Facebook commented that election staff inadvertently gave people sample ballots and then fed them through the precinct’s processing machine. The post suggested that people’s ballots would go uncounted.

Christine Lewis, Virginia Beach’s deputy elections registrar, says the reports are inaccurate. While some people did initially get sample ballots, precinct staff realized the error and gave them their real ballots.

“No voters were affected cause everyone got to vote on a ballot and it was caught even before they got to the machine,” Lewis said.

Voters Differ On Casino Gaming In Portsmouth And Norfolk

Portsmouth and Norfolk voters decide whether they want to permit casino gaming in their cities. Voters had differing opinions at the polls this morning.

In Portsmouth, the proposed location for the casino is off of I-264 and Victory Blvd, next to Tidewater Community College.

That was a key factor for Shandra Tyus in her decision.

“Degree programs that are there could very well transfer over to this casino entertainment complex,” she said. “So I support the opportunities that could be there for the younger generation.”

But Jonathan Bosier had his doubts about whether it was the right move for the city.

“I feel like they can put better stuff around this area,” he said. “So a casino, I mean, it’s going to make money but, good money or bad money?”

In Norfolk, the proposed location for the casino is next to Harbor Park on the Elizabeth River.

Several voters said they support bringing revenue to the city, but they don’t think it should be in the form of a casino.

But Robin Lee Ormiston said she welcomes economic growth especially in the midst of the coronavirus pandemic.

“I think supporting this local initiative to increase the number of jobs and opportunities for people is a good thing for the City of Norfolk,” she said.

In York and James City counties, there were few lines at some precincts.

Volunteers at the Seaford precinct in York County said there were a few dozen voters gathered when the polls opened, but it was cleared quickly.

At the state level, there haven’t been any major problems reported to the Department of Elections, according to Commissioner of Elections Chris Piper.

“We’re in a very good position here in the Commonwealth,” Piper said during a press conference. Many registrars pre-processed early ballots, and there are about 300,000 cast in the last days of early voting waiting to be processed, Piper said.

The department will have a better idea of how quickly Virginia can count ballots this evening, Piper said.

“It’s more important that you get it accurate and right than you get it fast, and that’s what we’re going to do in Virginia,” he said.

Lines Moving Ahead In Newport News

Voters in Newport News had short wait times this morning.

At Epes Elementary School, most voters in line at 6 a.m. finished voting within 15 minutes.

It was the same at other polling places.

Jeffery Davis voted at the Denbigh Early Childhood Center. He slept in and was concerned he’d be waiting all day to vote.

It took him a few minutes.

“It makes me a little nervous that we’re not going to have a big turnout,” he said. “Last time, when Obama was (on the ballot), this line was around the building.”

In Newport News, more than 47,000 people voted early, according to the Virginia Public Access Project.

Although a record number of people across the country have voted early, Virginia Beach voters are steadily turning out on Election Day.

More than 40 people lined up in the dark an hour before one polling location opened at 6 a.m. Tuesday. They passed the time during the cold morning sitting in chairs and scrolling on their phones.

Imanieeu Mungro said she usually votes on Election Day because she likes the tradition. She arrived at her precinct at 4:30 a.m.

“I like being the first in line or the first like five because I don’t want to wait. I’d rather get here and have to wait an hour versus like three hours,” Mungro said.

Voters said this year’s election is especially meaningful to them.

Desi-Rae Hall also arrived at her polling place an hour before it opened. She said she didn’t want to take a chance running into problems later in the day when lines may be longer.

“My life depends on this. I mean the last four years have been crazy. So I’m just looking for a change,” Hall said.

In addition to the presidential election, Virginia Beach has several local races on the ballot.