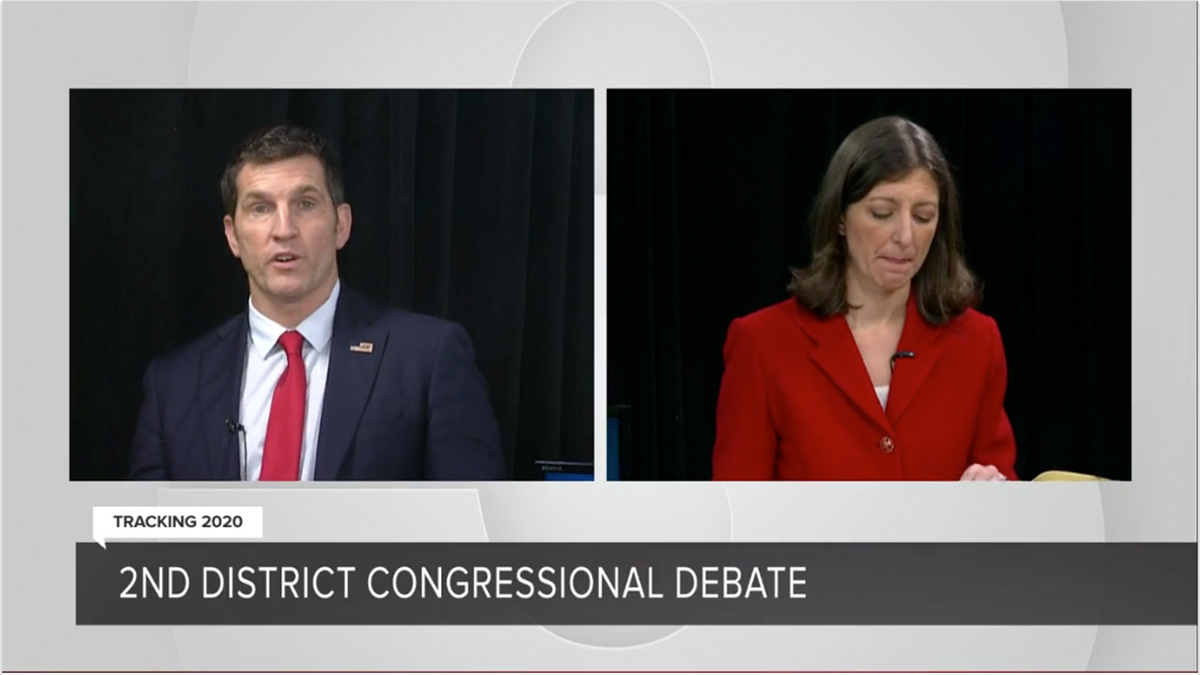 In their first of two debates before Election Day, Democratic Rep. Elaine Luria and her Republican challenger Scott Taylor attacked each other’s political records and sparred over healthcare, taxes and gun regulations.

The race for Virginia’s 2nd Congressional District is a bitter rematch of 2018’s contest when Luria barely defeated Taylor — then the incumbent congressman. Monday night’s debate, hosted by WTKR News 3, highlighted the gap between both candidates as they vie for a small percentage of swing voters in the competitive race.

The forum took place hours before a new poll showed Luria with a slight lead over Taylor. The nonpartisan Cook Political Report also changed its rating for the race from a toss-up to “Lean Democratic.”

Throughout the debate, Luria tried to remind voters of her moderate views, saying that she’s a strong supporter of gun rights and opposes defunding the police. She also expressed her support for Medicaid expansion and touted her record protecting the Chesapeake Bay.

Taylor, who was on the offensive for most of the debate, suggested Luria is too liberal for the military-heavy and historically conservative-leaning Southeast Virginia district. And as he’s done throughout the race, he accused Luria of neglecting the district’s needs.

“Mrs. Luria has the worst constituent services in Virginia,” Taylor said. “We have a long list of people who were not helped and that is the bread-and-butter of representation.”

Luria pushed back, noting she’s been securing federal assistance for businesses hurt by the coronavirus pandemic. She argued Taylor is “fear-mongering with stupid political comments.”

“I have visited businesses that are struggling,” Luria said. “I set up a hotline at my office for businesses to call to assist them with the payroll protection program.”

The debate grew more tense when the moderator, Joe St. George, asked Taylor about the election fraud scandal still hanging over him. Taylor said he didn’t know about the scheme by his former campaign staffers to forge signatures on a petition to get a third party candidate on the ballot in the 2018 race.

Throughout her campaign, Luria has focused on the fraud scandal and suggested that voters can’t trust Taylor. During the debate, she quoted the special prosecutor investigating the case who has said Taylor’s entire 2018 campaign remains under investigation and another indictment is possible.

“I’m surprised Mr. Taylor didn’t try to dodge this tonight because on every other occasion he’s tried to say he’s actually not under investigation,” she said. “So I just wanted this time to remind people of the quote by John Beamer, who’s the special prosecutor.”

“Shame on you for invoking Gold Star Families,” Taylor said. “You know better.”

Throughout the race, Taylor has tried to link Luria with more taxes. During the debate, he argued that Americans cannot afford any tax increases as they struggle financially amid the pandemic.

“Every bit of tax increase really harms us,” he said.

On guns, Luria noted that she’s a firearm owner and supports the 2nd Amendment. But in the wake of the 2019 Virginia Beach mass shooting, she said stronger regulations are necessary to keep guns away from “dangerous” people.

“Universal background checks are a very simple first step in order to protect people in our community,” Luria said. “We truly need to do something about this epidemic of gun violence in our country.”

In response, Taylor — an ally of President Donald Trump — argued that people should be able to purchase guns for protection against protestors. When asked if he supported any new gun restrictions, Taylor responded with his own questions.

One issue Taylor and Luria shared some agreement on was the military. Luria — a retired Navy commander — and Taylor, a former Navy SEAL, both said the military must increase its focus on China and the Western Pacific.

Luria and Taylor are scheduled to debate again Oct. 22. The race for the 2nd House District seat has been highly competitive.

This year, the nonpartisan Cook Political Report has rated the race a toss-up. It changed it's rating to “Lean Democratic” Wednesday morning.

The poll, which is based on interviews with 807 voters, suggests the election fraud allegations still impact people. Among voters who said the scandal is important, Luria leads by 48 points. Luria also has an 18-point lead among women and a 34-point lead among independents.

Political analysts say Taylor has tried to tie himself closer to Trump this year to secure the president's base of support.