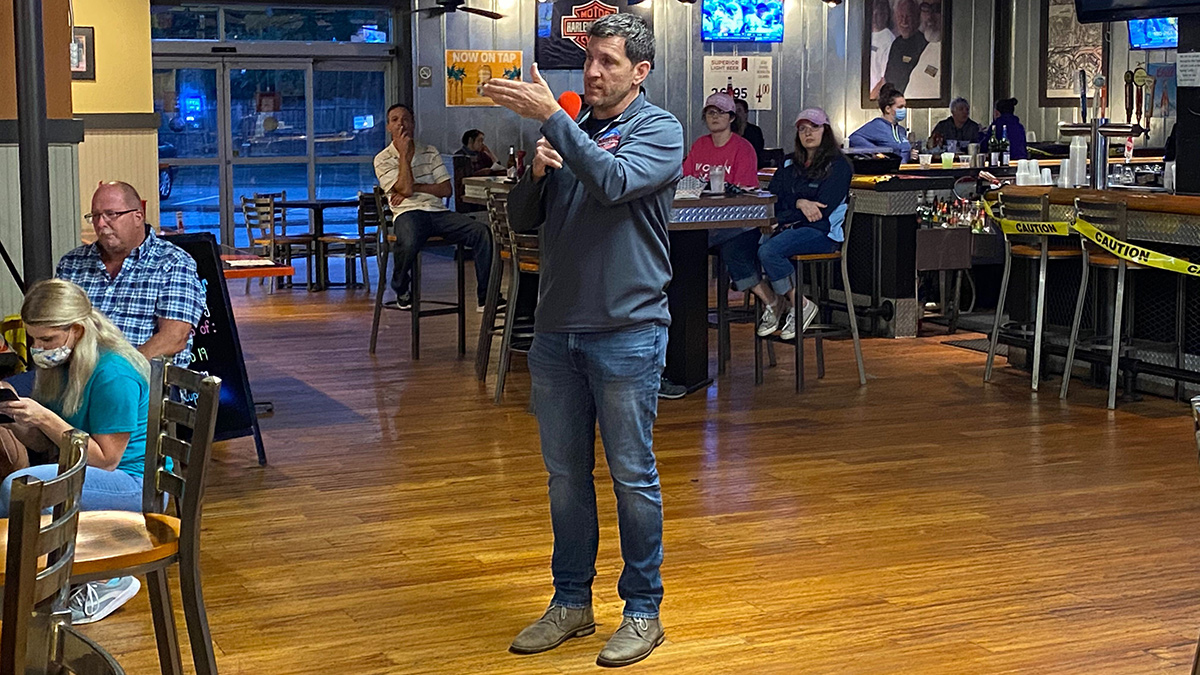 It's A New Race. But Questions Around Election Fraud Still Dog Scott Taylor.

On the campaign trail, Scott Taylor presents himself as just a “normal dude” who’s served his country.

The former Navy SEAL, who’s running to take back his old congressional seat in Virginia’s 2nd House district, touts his strong work ethic and humble roots growing up on the Eastern Shore with a hard-working single mother.

“We lived in a trailer at one point. A smaller house at another one,” he tells about 20 supporters at an AJ Gators in Virginia Beach one night in late September. “Like, I don’t come from money.”

Taylor also expresses his unwavering support for President Donald Trump and goes after his opponent — Rep. Elaine Luria. He accuses her of being soft on crime and says she opposes gun rights.

He adds he did a lot more for the district during his term in Congress from 2016 to 2018 than Luria has.

“Where is Elaine? Where’s Elaine? Did anybody see Elaine in the last two years?” he says at the campaign event.

What Taylor avoids mentioning is the election fraud scandal that contributed to his reelection loss in 2018 and still dogs him.

Two years after reports showed Taylor’s 2018 campaign committed fraud to help him win the race, the campaign remains under investigation — threatening his chances of taking back the seat.

Multiple former campaign staffers have pleaded guilty to forging signatures on a petition to help get a third-party spoiler candidate on the ballot in 2018. Another staffer has been indicted. Taylor denies knowing about the fraud and insists that investigators have cleared him.

“I am not under investigation. There is not one speck of direct evidence at all that implicates me in any wrongdoing whatsoever. That is all factual,” he says during an interview.

A special prosecutor who is leading the case has said Taylor is still part of the investigation and another indictment is possible.

In a competitive Southeast Virginia district that includes Virginia Beach and the Eastern Shore, the scandal could determine whether Taylor returns to Congress or Luria keeps the seat. As a result, the race has become bitter with Luria’s campaign running ads that highlight the scandal and Taylor accusing her of defamatory attacks.

WHRO Public Media broke the story about Taylor’s campaign staff forging signatures on the petition more than two months before the 2018 election. The petition sought to get independent candidate Shaun Brown on the ballot with Taylor and Luria. Brown previously ran against Taylor for the congressional seat in 2016 as a Democrat.

Many 2nd district residents heard their signatures appeared on the petition. According to reports by WHRO and the Virginian Pilot, several said they never signed it and declared the effort fraudulent. Some of the entries on the petition also contained misspelled names. Other names were of dead people.

As the scandal became public, a special prosecutor was quickly appointed to oversee an investigation. Democrats believed Taylor wanted Brown in the race so she could siphon votes away from Luria.

Taylor declared he knew his campaign sought to legally help Brown get on the ballot because they felt she was treated unfairly by Democrats. But he distanced himself from any fraudulent efforts to forge signatures.

The scandal remained a major issue right up to the 2018 election and helped sink Taylor’s candidacy. Luria won the race.

Since then, the special prosecutor overseeing the case — John Beamer — has charged three former Taylor campaign staffers with election fraud. Two have pleaded guilty to misdemeanor election crimes. The third staffer was indicted in September.

Beamer has said Taylor’s entire campaign remains under investigation and another indictment is possible. But Taylor continues to insist he’s been cleared.

Taylor's lawyer, Diane Toscano, has also said that she spoke with Beamer and knows Taylor will not face any charges in the case. She’s asked Beamer to publicly exonerate the former congressman.

“If it was not your intent to do so, please clear this up immediately by issuing a public statement that confirms what you told me expressly, namely that 1) Mr. Taylor is not the additional indictment that you referred to in the media and 2) that there has been no new direct evidence implicating Mr. Taylor since your 2-year-old investigation began,” Toscano wrote in a September letter to Beamer.

Beamer has since affirmed to WHRO that the status of the investigation is unchanged and he’s still investigating the entire Taylor campaign.

Luria’s 2020 campaign is trying to remind voters of the election fraud scandal. She’s released at least three TV ads highlighting it. One ad features a widow whose deceased husband’s signature appeared on the petition.

“When I think where I’ve seen my Stuart’s signature — our marriage license, his passport and then of course his will — the last place I’d thought I’d see it was forged on election forms two months after his death,” the woman says. “I call it hurtful Mr. Taylor and disqualifying.”

Taylor has called the ads smears and sent Luria a cease and desist letter in August, accusing her and the campaign of making “defamatory claims.”

Luria says the ads are appropriate.

“It’s about the fact that Republicans want to talk about election fraud. You got a guy right here that’s under investigation for election fraud,” Luria says during an interview after a recent campaign event.

In the increasingly acrimonious race, Taylor launches his own attacks at campaign events. He spends much time saying Luria supports defunding the police and isn’t as moderate as she promised she’d be. One of his ads says she’s dishonest. Another ad by the Congressional Leadership Fund calls her a phony.

Quentin Kidd, a political science professor and dean at Christopher Newport University, says the fraud case is dragging Taylor down again this year like it did in 2018.

He says Taylor may ultimately be found innocent in the election fraud case. But until that happens, the scandal may sway independent voters to distrust Taylor and support Luria. And that’s crucial because the race is tight in a competitive district.

Kidd says swing voters — who previously voted for Taylor in 2016 but then supported Luria in 2018 — will decide whether she keeps the seat.

“All she has to do is remind voters about the scandal and it involves the entire Taylor campaign,” he says. “While we may only be talking about three or four percent of voters, I do think that scandal still hurts him and I think it makes it harder for him to make the case to that small slice of voters that he needs to come back over.”

Suzanne Brown is one of those independents. In a recent interview outside the Virginia Beach elections office after she voted early, Brown says she supported Taylor in 2016 because she agreed with some of his policies. But after the forgery news broke in 2018, she voted for Luria.

“I find it hard to believe that Scott Taylor was completely just absent to what happened with his staff. As kind of the person that your staff is representing, you do have an ultimate responsibility to make sure your ship is intact,” she says.

“[Luria] is the only choice that’s acceptable,” Steve Fox adds.

But loyal Republicans and Taylor’s long-time supporters disagree and brush off the petition forgery. Risa Rinehart says he deserves another chance.

“You have to dig deep and figure out what you want to do in your heart. And he’s always been very present in our community and will continue to be if he’s elected Congress,” she says.

The election fraud misconduct will likely be a main issue when both candidates start debating later in October. The first debate is Oct. 20.