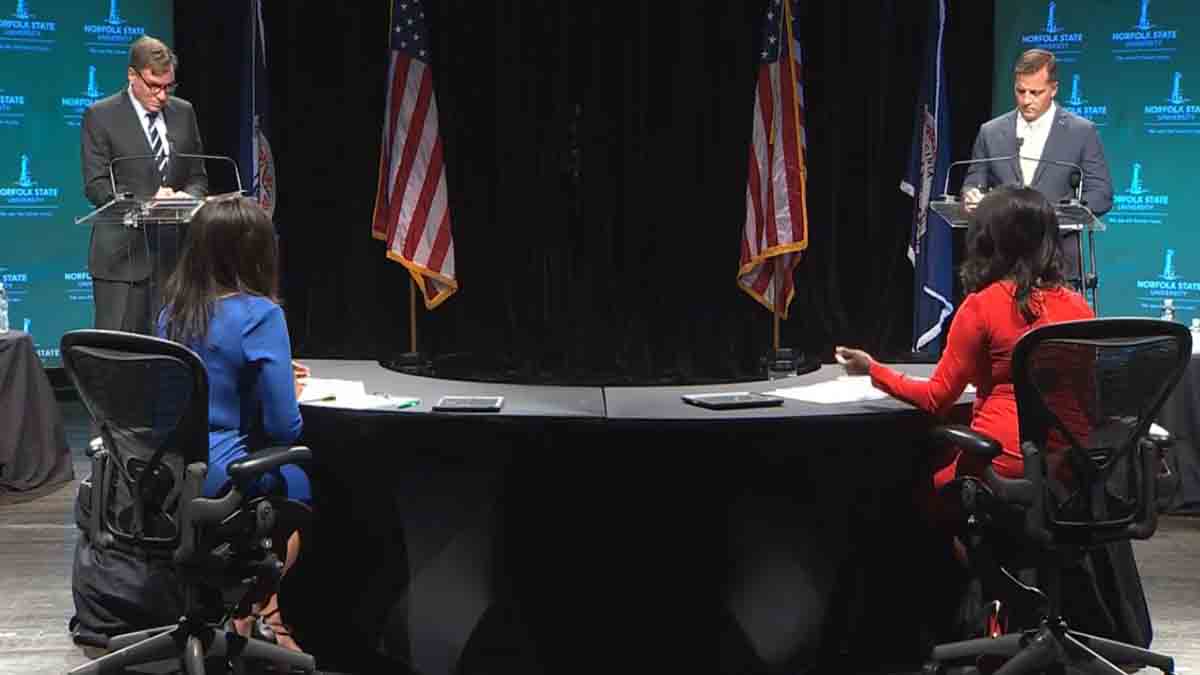 At the first statewide political debate Norfolk State University has ever hosted, moderators asked candidates to confront racism and inequality.

U.S. Sen. Mark Warner and Army veteran Daniel Gade are running for one of Virginia’s U.S. Senate seats. Warner, a former governor, has held the position since 2008.

NSU hosted the second of three debates the candidates will participate in. The first debate focused on a range of political issues, including coronavirus response and the Affordable Care Act.

“These are hard conversations. And it will not be easy,” said Eric Claville, the director of NSU’s Center for African American Public Policy. “But as Virginia's and as Americans, we can do it, because we must do it.”

Moderated by long-time local news anchors Regina Mobley and Anita Blanton, the candidates were forced to clearly state their position on several topics.

Here are some of those answers.

Gade repeatedly mentioned that Warner voted against a recent coronavirus relief package. Warner said he thought that bill didn’t provide enough assistance to Black- and minority-owned businesses, among other shortcomings.

The candidates spoke primarily about coronavirus relief legislation when asked questions about the pandemic.

Gade said he doesn’t support a vaccine mandate for children when one becomes available and Warner said he didn’t think something like that was possible.

Warner did not say if he would support a national mask mandate. Gade said he didn’t, but encouraged mask-wearing.

Moderators asked candidates if they agreed with President Donald Trump’s 2017 comments that there were “some very fine people on both sides” during a deadly protest in Charlottesville.

In 2017, Warner had a short response to Trump’s statements: “No words,” he tweeted.

Warner didn't use the debate to clearly speak against white supremacy, but criticized the president for his past responses.

Gade fired back, criticizing Warner’s 2002 judicial appointment of Brad Cavedo: “He said that Black people are parasites, and he said they would suck billions of dollars out of our economy, and yet you appointed him anyway.”

Warner responded by saying Cavedo was on a list of judges that also included Black Judge Richard D. Taylor.

“The fact is, that was only done in conjunction with that then Republican controlled legislature,” he said.

Warner and Gade shared some thoughts on parts of police reform.

Both support releasing body camera footage, though Warner specified it should happen after a police department reviews it.

Neither supports defunding the police, but both said police funding could be used in ways to better protect people. Warner suggested money for training, while Gade referenced the need for money for body cam initiatives.

Warner continually brought up his support of the federal Justice in Policing Act, which would ban chokeholds. It’s a provision that came about following the death of George Floyd, who was killed as an officer kept a knee on his neck for almost 9 minutes.

Gade doesn’t support banning chokeholds and pointed out that Floyd’s death wasn’t caused by a chokehold.

“George Floyd's death was a murder, plain and simple,” Gade said. “The police officer was not using a chokehold. He just put his knee on his neck and he stayed there for nine minutes until George Floyd died.”

On the Black Lives Matter movement

Gade and Warner both voiced their support for the Black Lives Matter movement, which has organized rallies and protests throughout the country in recent months.

But they both also said violence, like looting or property destruction, at the events shouldn’t be tolerated or encouraged.

Reports claim the majority of Black Lives Matter protestors have been peaceful.

Fielding questions from NSU students, Gade and Warner veered into a discussion about student loan debt.

He also praised Trump for investing in Historically Black Colleges and Universities. In the last two weeks, the administration awarded $17 million to Hampton University for a workforce development program.

Gade, who homeschools his children, was also asked about comments he made last year about “nasty failing public schools.”

“Far too often these schools have higher crime rates,” he said at the debate. “They have teachers who are under-qualified, they're underfunded.”

He said he made those comments in relation to school choice, which allows families to more easily pursue educational opportunities outside of public schools. Often, school choice is associated with charter schools.

“If we give families choice and competition and the funding to be able to do that, then those families will make the best choice for their own student,” Gade said.