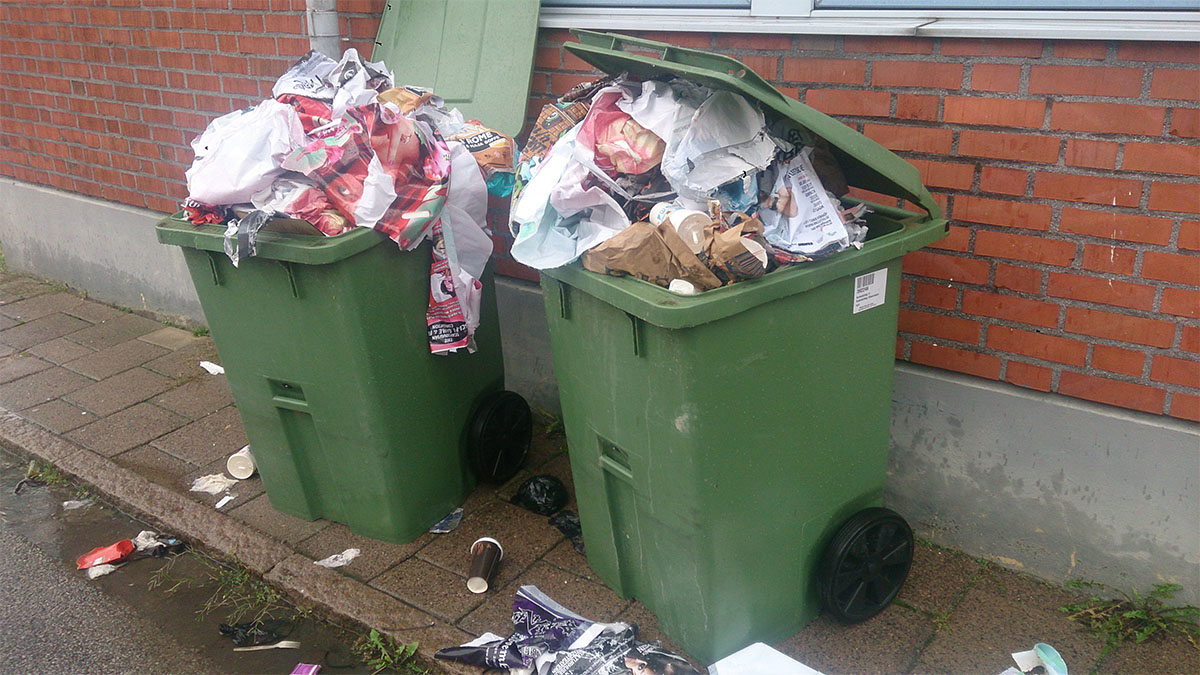 Photo by Olle Jonsson/Flikr. The coronavirus outbreak has shifted the bulk of garbage collection from offices to residences.

If your trash and recycling bins outside have been overflowing lately, you’re probably not alone.

Some Hampton Road cities are seeing dramatic increases in residential garbage as most people stay home amid the coronavirus outbreak.

And while as many as 2,000 cars sometimes dropped off trash at Virginia Beach’s landfill on Saturdays before the COVID-19 pandemic, 4,392 cars visited the landfill on a Saturday in April. Overall, the city experienced an 89% increase in landfill visitors in April from the same time last year.

At the same time, waste at office buildings has dramatically decreased.

“With the governor’s stay-at-home order everything is being captured in the home,” said Kristi Rines, Virginia Beach’s Recycling Coordinator.

The city is seeing more boxes in recycling bins because people are ordering more online to avoid leaving their homes. Virginia Beach is also collecting more debris as people do spring cleaning and yard work. The city’s waste call center is suddenly experiencing an influx of requests for pickups.

“People have noticed that they have wait times,” Rines said. “Before, we never had wait times. You could call our call center and get right through.”

The city is staffed based on the normal amount of trash at homes and apartments. The waste department cannot hire more workers because Virginia Beach has implemented a hiring freeze amid revenue shortfalls due to the pandemic. Staff, therefore, are now working longer hours to meet the increasing demand for trash collection.

“And you wouldn’t want to bring on more people during this time anyway because when things go back to normal, we won’t need the extra people,” Rines said. “We would need to train drivers and need to train crews. And right now we’re just stretched and don’t have that capacity to train new people.”

Rines said she expects residential trash and recycling to normalize once people return to offices and begin eating at restaurants.

Still, not all cities are seeing surges in residential trash collection. While home recycling has increased in Norfolk, curbside trash collection was down nearly 14% in April compared to the same period last year.

Alana Smith, who works with the city’s public works department, attributed the decrease to Norfolk suspending bulk pickups throughout April due to limited staffing. The city also temporarily stopped collecting overflow garbage bags if they did not fit into garbage bins.

Norfolk lifted the suspension on bulk waste pickups Monday. Smith said the city may soon begin to experience the surge in residential trash other areas are witnessing.

“We’re expecting much more items that people are going to put out,” Smith said, now that services are resuming.