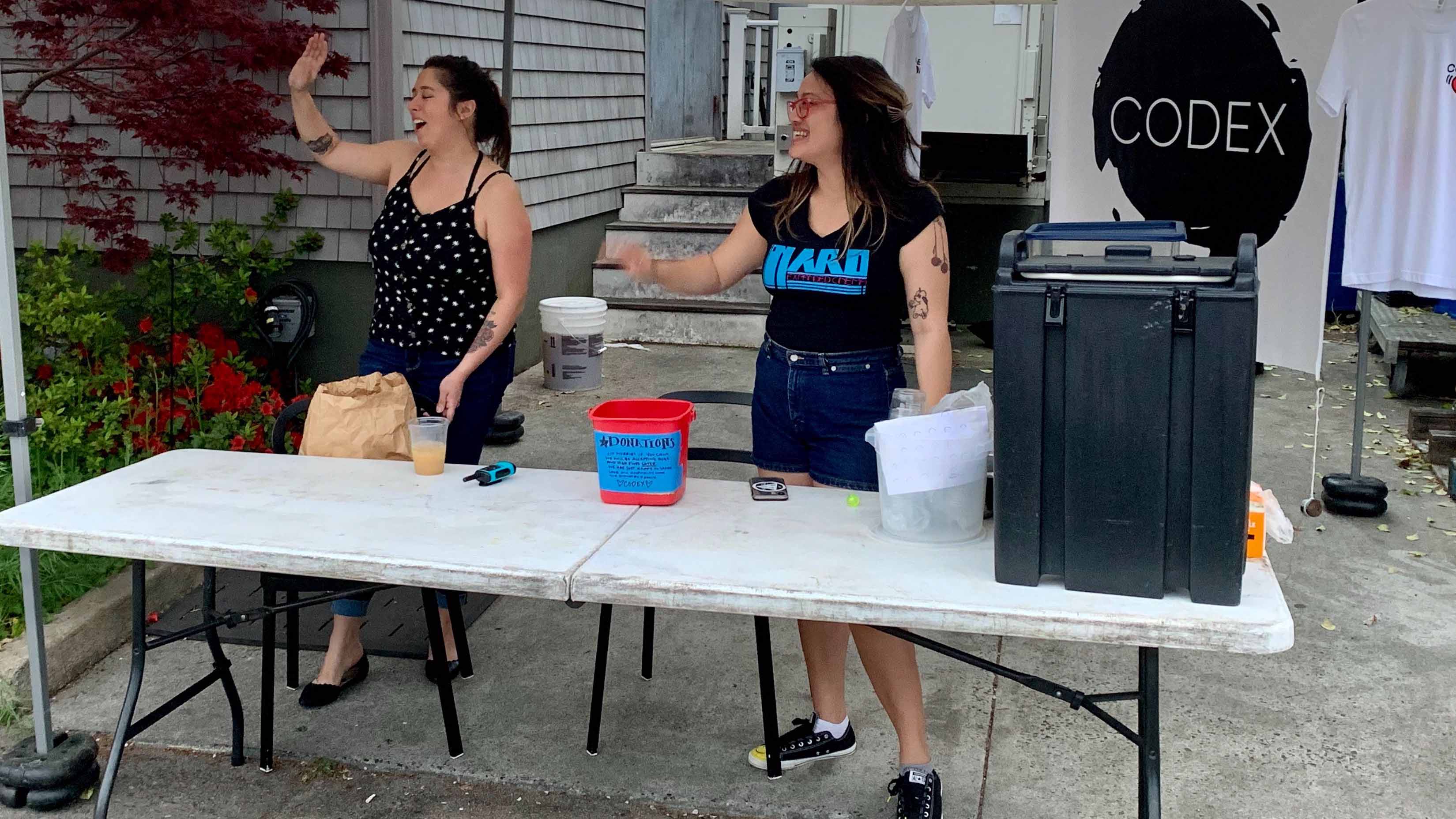 Photo by Sam Turken, WHRO. Codex is offering free meals once a week to laid off workers amid the coronavirus pandemic.

Ian Hock is avoiding the numbers.

The chef and owner of Codex off Colley Ave. in Norfolk has kept his restaurant open for takeout amid the coronavirus pandemic. But he says the profit margins are tightening by the day.

“We’ve dropped down probably at least 50 percent,” Hock says one recent evening. “But I figure the less I look at them, the less stressed I’m going to be.”

Ask him on this night about Codex’s future, and he’s confident the restaurant can weather the social distancing mandated due to the virus. Tomorrow his outlook may be different, he says.

Hock ponders his business’s future even while some of his staff sit under a white tent outside Codex, giving out free food to people.

“Whenever the restaurant industry does get back up, tip your servers double, because we are struggling.”

It has been just over a week since Governor Ralph Northam ordered all restaurants to close except for takeout and delivery to limit the spread of the virus. Many workers have since lost their jobs and are unsure of what to do next.

Some Norfolk restaurants are trying to help by giving out free meals to food industry workers and anyone else in need. Each night, a different restaurant has prepared and served the meals. The money to cook the food comes from donations and the owners’ pockets. More than 100 meals go out to people some nights.

“Nobody ever really looks out for us,” says Eric Nelson, the chef and owner of the tapas restaurant Crudo Nudo, who first thought of giving out free meals. “I said, ‘You know what? We need to start something that’s gonna make sure we take care of our people.'"

He first planned on only providing the food on Saturdays at his restaurant. After then deciding to expand the initiative, Nelson convinced Hock and the owners of 80/20 Burger Bar and Redwood Smoke Shack to participate.

Nelson says he is also unsure about the future of Crudo Nudo. Takeout is not going well. But he says he’ll keep offering the free meals as long as he can.

Crudo Nudo recently offered a bolognese pasta dish and chicken and rice as free meals. Nelson says preparing the food has been relatively inexpensive because he uses supplies already on hand.

According to the National Restaurant Association, Virginia lost more than 57,000 restaurant jobs in March.

Norfolk has tried to ease the pain on restaurants by delaying payment on business and personal property taxes. The recently-passed federal stimulus bill also expands unemployment benefits, provides many people payments up to $1,200 and offers some businesses forgivable loans.

“Norfolk is a vibrant city in the restaurant scene. It is so upsetting to me and my colleagues on council to see what this virus is doing on an industry that has been working so hard to get to where it was in Norfolk,” says Smigiel, who's been outspoken about the issue.

Becca Lodge is furloughed as a server at Waterside Seafood Company downtown. She was just approved for unemployment. She has also been picking up free meals most nights to save money. She even has a calendar showing which restaurants are offering the food each night.

“Considering I’m a terrible cook, and I don’t cook at home, a tremendous amount of money actually. And also more than the money, it’s saving a lot of heartache,” she says.

Lodge says finances will tighten for people in the next few weeks. Jenna Cranfill, another laid off employee from the Greek restaurant Orapax, adds what is scariest is the uncertainty of how long restaurants will remain closed.

“Nobody knows what to expect,” Cranfill says. “Whenever the restaurant industry does get back up, tip your servers double, because we are struggling.”