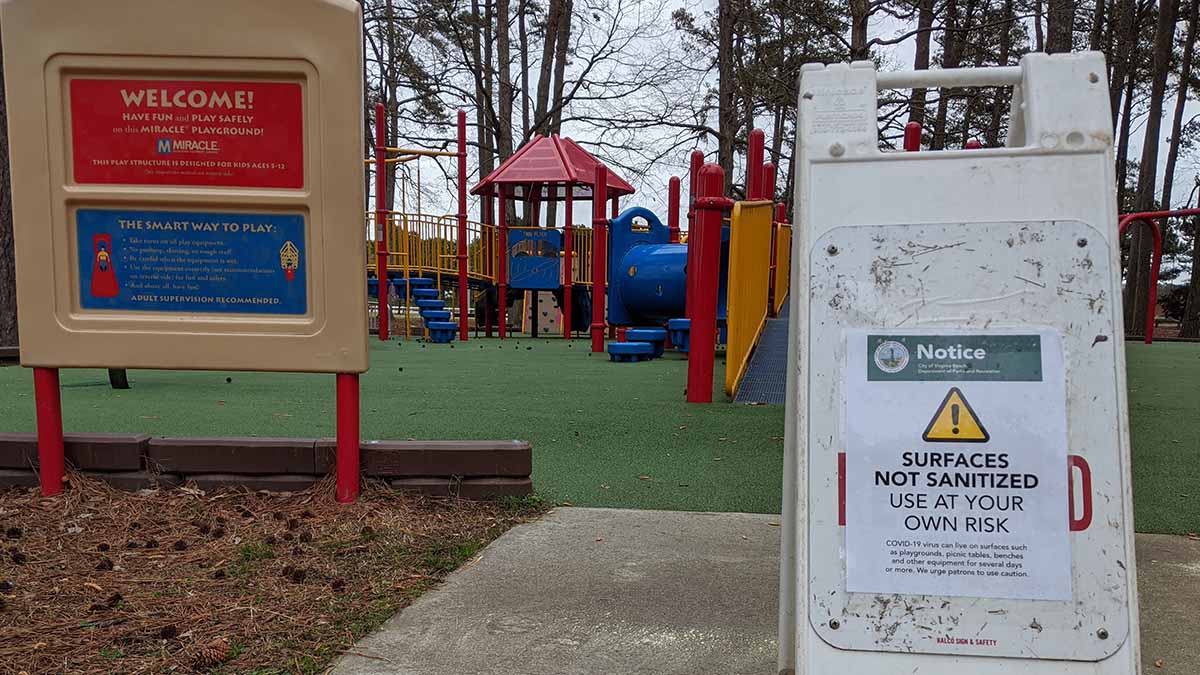 Photo by Rebecca Feldhaus Adams, WHRO. Parks and beaches are still open in Virginia, as long as groups are no larger than 10 and practice social distancing.

Gov. Ralph Northam announced Monday that all K-12 public and private schools will remain closed for at least the rest of the 2019-2020 academic year in order to slow the spread of the coronavirus.

He also said all restaurants can only stay open for takeout and delivery. In addition, all non-essential brick-and-mortar businesses can serve a maximum of 10 customers at a time beginning Tuesday, March 24. If they cannot do so, they must close.

The moves come as cases of the virus across the state continue to surge.

“Our priority is to save lives,” Northam said during a daily press conference in Richmond Monday, announcing the executive order. "The next several weeks, the next several months will be difficult. They will require everyone to change the way we live and interact with each other."

Virginia joins Kansas as the only states that have closed schools for the rest of the academic year.

The governor previously announced March 13 that schools across the state, serving approximately 1.5 million students, would close for at least two weeks. He said Monday his extension of the closures is necesary to minimize the death toll of the virus.

The Virginia Department of Education will issue guidance for how school divisions can continue to best educate students for the remainder of the academic year. The state is also working on waivers to relieve testing requirments at the federal level.

"I understand that for many families these closures present practical considerations of who will care for children during the day, now that they are not in school," Northam added. "I'm calling on our local communities, private daycare providers, community childcare partners and public schools to rally together to provide childcare for the young children and school-aged children of essential personnel."

In a letter to students and families following the governor's announcment, Virginia Beach City Public Schools Superintendent Aaron Spence said the district is working through the "logistics of this closure."

"I know you have so many questions. Having my own children in our schools, I want you to know that I am right there with you," Spence said. "There are so many moving parts and pieces, and we want to make absolutely certain that they all fit and work smoothly together."

Virginia Beach City Public Schools are a part of the Hampton Roads Educational Telecommunications Association, which holds the license to WHRO Public Media.

Northam said the new restrictions do not constitute a shelter in place mandate, which several other states have begun implementing. Rather, his orders are meant to "encourage" people to remain at home and limit social interactions. He said he does not want to legally penalize people for leaving their homes.

However, all recreation and entertainment centers must close for at least 30 days. Personal care services, including spas and barbershops, must close if they cannot adhere to social distancing.

Northam said the new restrictions will exacerbate the economic toll of the virus, and more families will lose work. Last week, nearly 40,000 people in the state filed for unemployment.

This is a developing story. It will be updated.