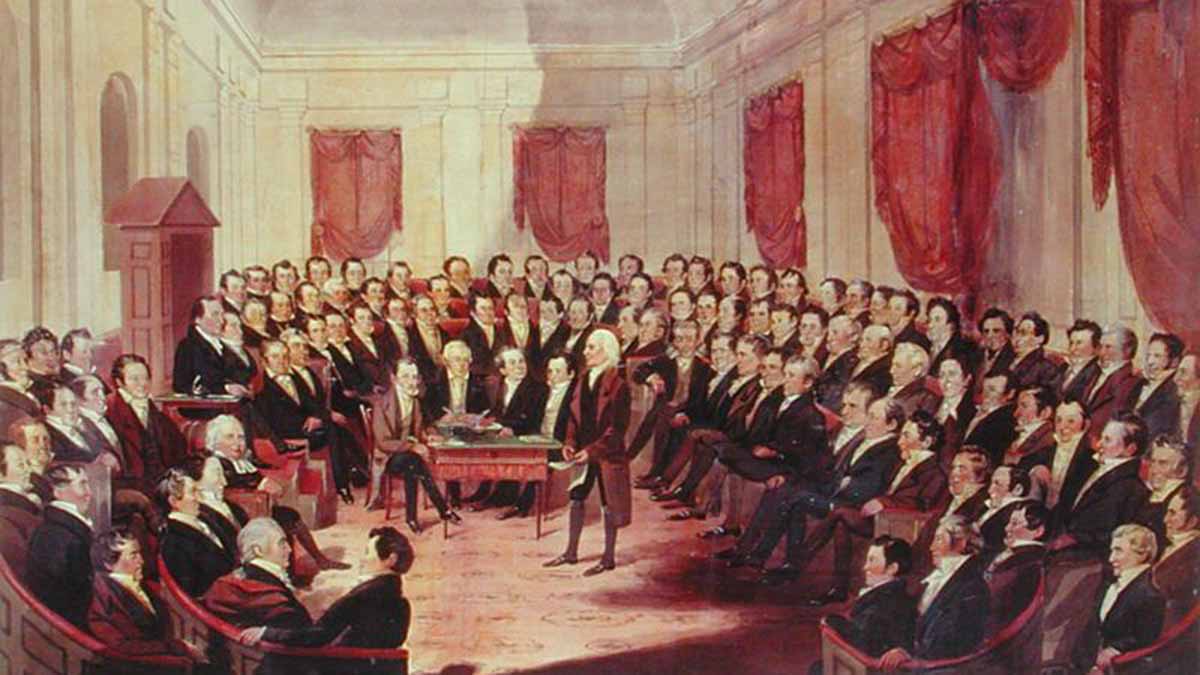 Painting by George Catlin (1796–1872). The Virginia Constitutional Convention. The General Assembly has set a few specific rules about what the government can and can't do during a state of emergency.

Virginia Law And The State Of Emergency

For many of us on the east coast, a “state of emergency” isn’t a rare situation. You may have been through multiple states of emergency for hurricanes alone.

But the coronavirus emergency feels different.

Unlike weather events, this pandemic is kind of invisible. The forecast is vague, and it’s not clear how long this emergency will last. And it makes some people nervous — not just about the virus, but about the powers held by the government.

That doesn’t mean presidents don’t take emergency actions, of course, including now. President Donald Trump, for example, issued a travel ban for non-US citizens from 26 European countries. Presidential actions can lead to litigation, as happened during the Civil War and the Korean War.

Looking at Virginia, Dinan says the state constitution doesn’t have a provision for a state of emergency, as such. But it does provide the governor and other officials powers during times of crisis, he says. And the General Assembly has weighed in, laying out who can declare an emergency and what can happen.

“They actually have a specific provision in there that says nothing shall empower the governor or any political subdivision to in any way limit or prohibit the rights of the people to keep and bear arms as guaranteed by the Constitution of Virginia,” Dinen said. “They didn’t say that for any other rights or provision.”

Back in January, Gov. Ralph Northam did limit guns — specifically, on capitol square on Lobby Day. When that limit was challenged in the Virginia Supreme Court, Northam won.

There’s been widespread reporting of soaring gun sales since the coronavirus was identified in the United States.

This isn’t unusual during a crisis, but many gun store owners say they’ve seen nothing like it, with emptied shelves akin to the run on toilet paper.

Dinan said the current situation is a good reminder of how much governance happens at the state and local level. He said it would be harder for a president or Congress to close bars and restaurants in a state or tell residents to shelter in place, as governors have done recently (the latter, not in Virginia as of Monday).

Gov. Northam is hosting daily press conferences with updates on coronavirus in Virginia. They stream live on his facebook page.