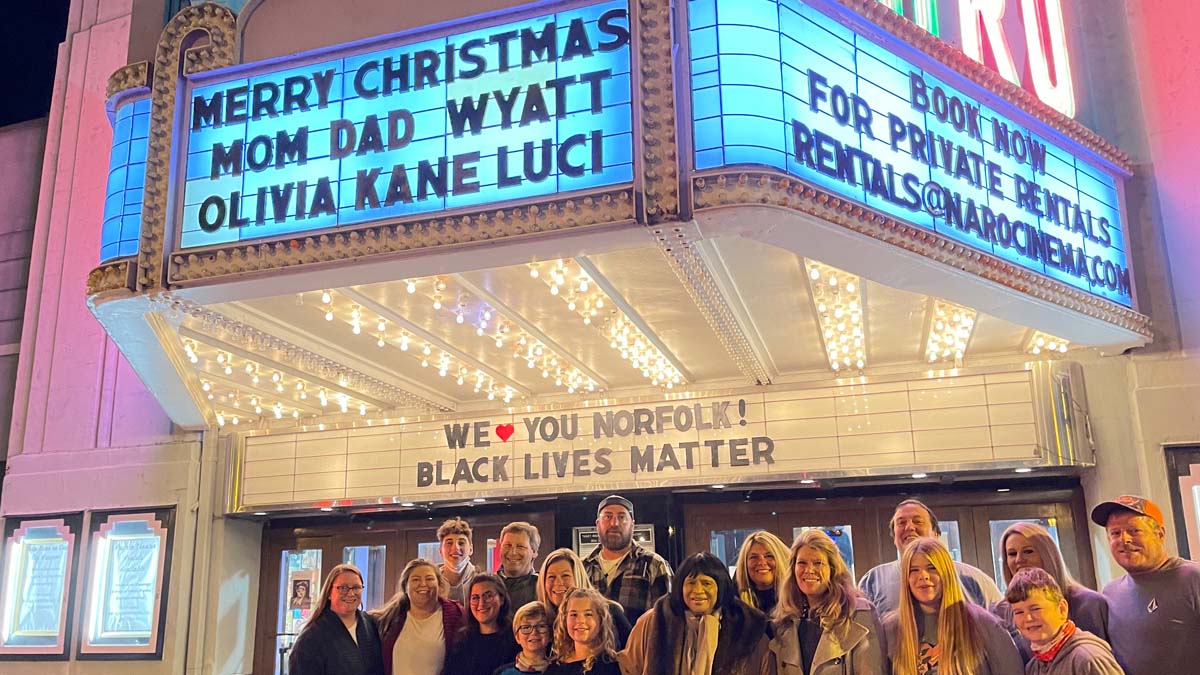 Photo taken by Jonah Grinkewitz. The Shoulders family poses under the marquee at the Naro Theater in Norfolk. They rented out the theater earlier in December to carry on their holiday tradition of watching “It’s a Wonderful Life”

Holiday Traditions Continue At The Naro In Norfolk

The coronavirus pandemic isn’t stopping some families from participating in a Hampton Roads holiday tradition.

For more than 20 years, the Naro theater on Colley Avenue in Norfolk’s Ghent neighborhood has shown “It’s a Wonderful Life” and “A Christmas Story” during the week of Christmas.

But this year, owners Thom Vourlas and Tench Phillips didn’t feel comfortable opening the theater for public viewings. Instead, they’re renting the theater out to private parties of 10 or less.

Under the current COVD-19 restrictions, movie theaters in Virginia are allowed to operate at 30% capacity, or no more than 250 people.

Although the price tag is hefty -- $290 for a two-hour screening -- some are willing to pay it to carry on the treasured tradition.

“Oh they love it,” Vourlas said of their customers. “They hold the Naro near and dear to them, and then to think they can have the whole place to themselves, it’s a treat.” Terri Shoulders and her family has seen “It’s a Wonderful Life” there the past four Christmases. They rented it out earlier in December when the gathering limit was set at 25.

Her kids even rented out the marquee for a special Christmas message: “Merry Christmas Mom and Dad from Wyatt, Olivia, Kane and Luci."

“It was amazing that my kids got together and did this for us to continue this tradition,” Shoulders said.

Shoulders said that in a difficult year like this, the film’s message really resonates.

“Life is good, and life is wonderful. And that’s what we need to remember no matter what,” she said.

While life hasn’t necessarily been good for theaters, Vourlas said the Naro has been able to stay afloat with the help of federal and local grants, as well as personal donations.

“Some people have sent us checks just saying, 'Hey, we’re worried about you, here’s some money...stay open,'” Vourlas said.

The situation varies for other theaters in the area.

Regal Cinemas announced in October that they would be ceasing operations, but Cinemark and AMC are open under the reduced capacity limits.

Another local theater -- The Commodore in Olde Towne, Portsmouth -- was able to reopen in June because of its restaurant style seating.

Until the Naro officially reopens, Vourlas said he’s encouraged by the support of the community and their desire to carry on Christmas traditions.

“It’s great that people want to see the movie here,” he said. “And I guess I could always sneak up to the booth, pretend like I’m working, and watch it with them.”