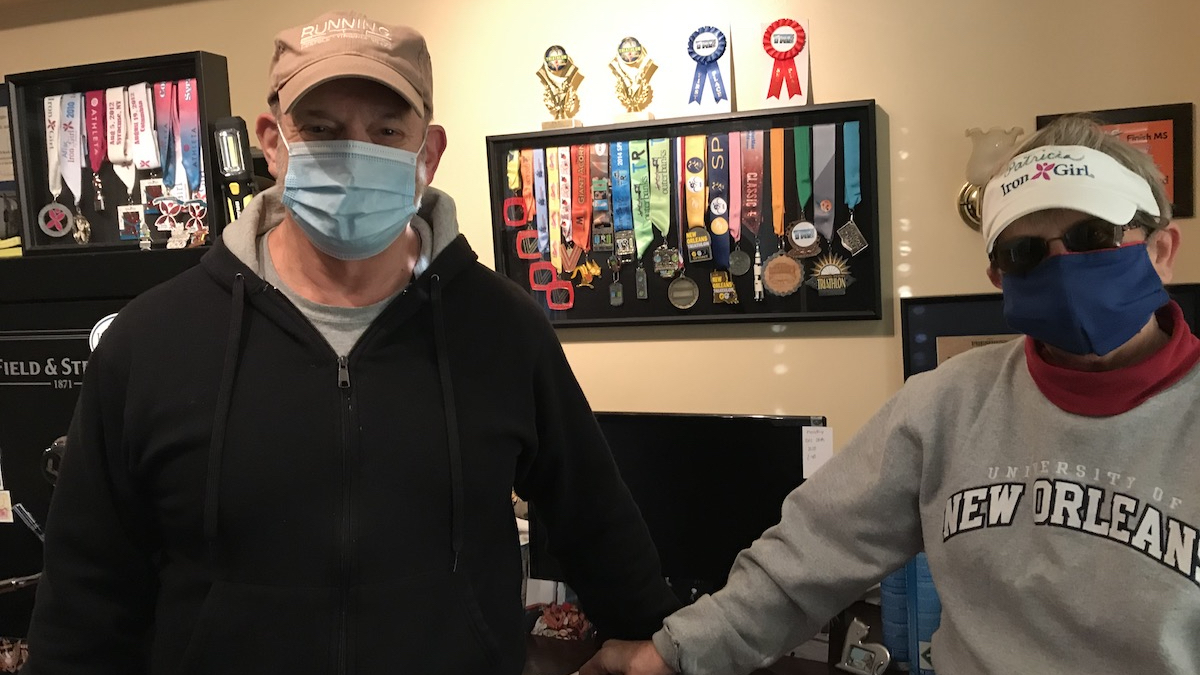 Photo By Paul Bibeau. Bill and Patricia Richard show off their swag and prepare for training.

'It's Like I Took My Happy Pill': Virginia Beach Couple Still Going For The Win Despite Pandemic

Bill Richard is 73. His wife, Patricia, is 70. They've been competing in triathlons all over the country.

"As far away as Alaska," Patricia says.

A triathlon is an endurance contest consisting of swimming, biking and running.

COVID-19 has caused cancellations and severe restrictions on athletic competitions this year. For Bill and Patricia, it's also isolated them from their children and grandchildren, and from the RV trips they usually take out of state.

The couple was undeterred. They spent months training and eventually put together a kind of homemade event they completed in their neighborhood, with only each other to cheer themselves on.

"We did a 1.2 mile swim at the Bayside Rec Center, came home, got on our bikes, and we biked 56 miles, came home and walked 13.1 miles," Patricia says. The distances of these events are found in a type of triathlon called a half-Ironman competition.

Bill is a U.S. Navy veteran who started in the service working for the manned space recovery program during the Apollo years. He traveled all over the world, bringing his turbo trainer -- an indoor cycling device -- with him everywhere.

Patricia's love of cycling started before she met Bill, when her first husband goaded her into a competition.

"I had seen they were going to have a 100-mile bike ride to raise money for the American Lung Association," she explains. Her dad had died of COPD, and she wanted to make a difference. But when she told her first husband, his response was less than enthusiastic.

At the time she didn't have a bike, and with six weeks to go to the event, she didn't have much time to train. But she dove into it, finishing the race and becoming the top fund-raiser for the state that year.

The Richards have been working out together for years. On their easier days, they take brisk walk through their neighborhood as they talk about how they've maintained their regimen, and a positive attitude, during a difficult year.

Bill says the key is to exercise with a partner. He has been a personal trainer over the years for several people, and he says that two people working together on a routine can often help motivate each other.

"Sometimes you just don’t feel like working out," he says. "We’re human. But the other person says, 'Well, come on, and if you’re not going to do it, I’m going to do it.'" And that usually does the trick.

They're not the first people to discover that exercising with friends can make for better results. A study from Michigan State University found that it can help people train longer with greater intensity. And exercise is great for your mood.

"Exercise is like taking an antidepressant," Patricia says. "I always say, 'It’s like I took my happy pill.'"