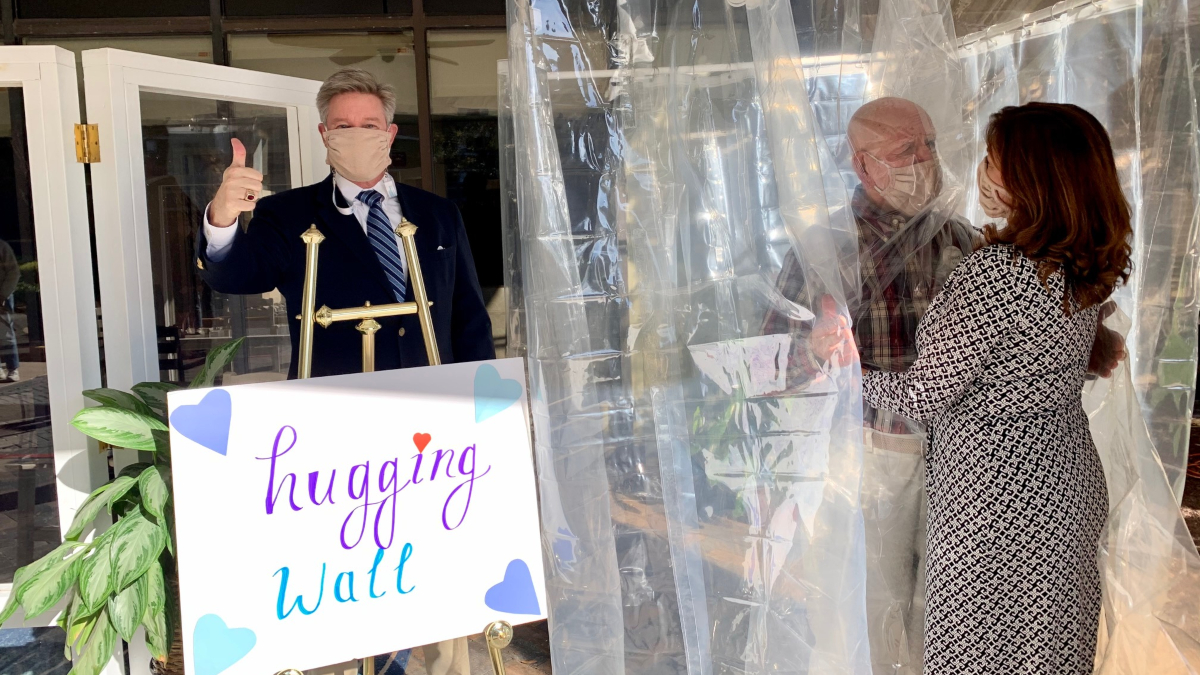 Photo by Amy Sheyer/WCCB. Dr. David Via, a resident at Westminster-Canterbury in Virginia Beach, hugs a family friend through a plastic curtain shield. CEO Ben Unkle, to the left, gives a thumbs up to social contact in this time of isolation.

Isolation Protects Elderly From Coronavirus, But Has Consequences

Long-term care facilities and retirement communities have been waging a battle over the past eight months to keep elderly residents safe from the pandemic. This has meant isolation.

Several leaders working in retirement communities and providing services to the elderly had a meeting this week to discuss how things are going with U.S. Senator Mark Warner of Virginia. They all agreed things aren’t quite right.

Jenny Maugeri is the Executive Director at Atlantic Shores, a retirement community in Virginia Beach. She said COVID-19 deaths aren’t the problem there.

“But mental health has taken a big hit,” she said. “We noticed when we opened back up, wow, they’ve really declined.”

The lack of mental stimulation is also the source of health problems. Ben Unkle, CEO of the Westminster-Canterbury retirement community, says evidence of the acceleration of cognitive decline is apparent in MoCA testing (Montreal Cognitive Assessment).

Worst of all, Maugeri says, “They’re dying. And they’re dying alone.” She’s referring to deaths that aren’t from COVID-19.

A recent study from Virginia Commonwealth University showed that between March and August this year, 4,500 Virginians died above and beyond the normal death rate. These are called “excess deaths.”

We can blame the coronavirus for 52% of these deaths. The rest are secondary effects of the pandemic that are still being studied.

Elderly people who live in their own homes are perhaps the most isolated of all. The non-profit Senior Services of Southeastern Virginia provides advocacy and services to seniors throughout Hampton Roads, including Meals on Wheels and home support. CEO Steve Zollos and his staff keep in touch with the homebound.

“They get at least two calls a day. We just call them ‘well checks.’ How you doing, you know. You have a friend, we care about you,” Zollos said.

They also send out activity packets to help “keep their cognitive processes in gear.”

According to Unkle, the deleterious effects of solitude have to be addressed with as much effort as keeping people safe.

“I think our industry has been so focused on safety for fear of lawsuits, and fear of death that we have forgotten about, not paid enough attention to, the need to be innovative about all those people who are suffering from the cure,” Unkle said.

One innovation Unkle and his staff made at Westminster-Canterbury is the installation of a “shower curtain wall” outside.

Residents can hug their family members standing on the other side of the curtain.

Unkle and his colleagues are tired from the physical fight of keeping the coronavirus at bay. But, he said the industry has to fight the emotional battle as well.

Meanwhile, the pandemic is surging in Virginia, and health experts advise distance this holiday season.