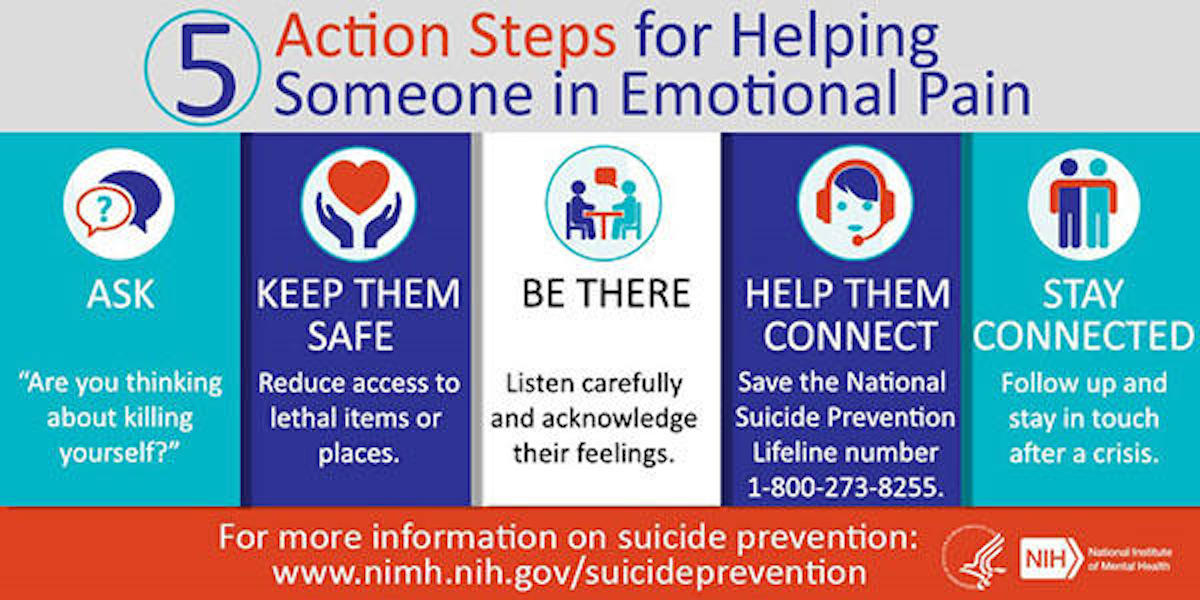 Preventing Suicide: A Message From Someone Left Behind

Earlier this week in our Mental Health Matters series, we spoke with local mental health professionals and trainers about the need for suicide prevention services throughout the pandemic. In this follow-up report from WMRA's Randi B. Hagi, we hear from a mother who lost her son to suicide earlier this summer.  (This story may be difficult for some listeners to hear.)

If you or someone you know is considering suicide, please tell a friend or loved one, and contact available resources, such as your local Community Services Board, hospital, or the National Suicide Prevention Lifeline, at 1-800-273-8255.

Before COVID-19 hit, there was a little house in Charlottesville where anyone struggling with mental health challenges, as long as they were 18 or older, could join a peer support group, see a peer support specialist one-on-one, access the food pantry, or just have a cup of coffee and socialize in a welcoming space.

ERIN TUCKER: It's a very home-like environment. And people come in and they're greeted, usually with lots of hugs and hellos and everybody knows everybody.

Erin Tucker is the director of On Our Own of Charlottesville.

TUCKER:  Everyone that works there is in recovery from some type of mental health challenge and/or substance use challenge. And so we find that that often leads to a really quick connection.

She and her staff have been checking in with their 62 members every day during the pandemic, facilitating recovery groups over Zoom, and are now starting to open back up for socially distanced conversations on the porch. Right now, though, they're mourning the loss of one of their members, Luke Raymond, who died by suicide earlier this summer.

TUCKER: You know, he's been coming to On Our Own for eight years, and he was only 30 years old. So there's going to be a huge hole I know when we go back to all being in the house together, which, who knows when that's going to be.  He was very well loved, and he gave so much to so many people, and was so strong and was so nonjudgmental, and just a beautiful soul. It really rocked us, you know, we did not see that coming.

Luke's Mom, Crissanne Raymond, was kind enough to speak with us about her son.

CRISSANNE RAYMOND: My son was beautiful. He was funny, he was smart, super smart. He played chess – taught his brother and sisters, you know, he had that kind of mind. And I would always encourage him. And I would always let him know that God has a plan and God had somebody for him in his future.

Raymond says that Luke was a normal kid until he had an episode of psychosis in college after smoking spice, also known as K2, or synthetic weed. The drug's potential side effects are much more dangerous than marijuana. Raymond says her son was never the same afterwards, and went on to struggle with bipolar disorder and depression.

RAYMOND: He had a lot of high functioning days. You wouldn't, I mean, the kid looked great. He was always dressed well, clean, riding his bike, you would never know. Beautiful smile … He would always encourage people, but there was just this deep sadness under there.

As Jane Wiggins from the Campus Suicide Prevention Center of Virginia told us, suicide is almost never attributable to just one factor.

JANE WIGGINS: It's very, typically very complicated, and it's never one or two things. It's always the convergence of a whole host of risk factors coming together – some we know about and some we don't.

This was true for Luke, too – despite the support of his family and peers who loved him, he faced a complex whirlwind of problems: his depression prevented him from holding down a job, and that created financial stress; he didn't like the way antipsychotic medication made him feel. His depression also made it hard for him to navigate the healthcare system, which his Mom says didn't provide enough follow-through and didn't include her in conversations about her son's health.

She tried for years to get him enrolled in ground-breaking research on treating depression at the Center for Psychedelic and Consciousness Research at Johns Hopkins, or to get a similar program started at UVa, to no avail. Luke was also afraid to burden his family – like by accepting help paying his rent.

RAYMOND: I kept telling him no, Luke, no! You know, whatever it takes, I'm here to help you! That's my job. I would tell him that. [sighs] Anyway. It's really sad. I wake up in the middle – I mean, tears are always just right, right there. He was a twin, so his twin brother's having a really hard time too. And his three older sisters.

Luke had planned to earn his CNA certification and enroll in nursing school. It made Raymond really proud to think of all the people her son could help. She and her family have started a GoFundMe page for the Luke J. Raymond Foundation. Their goal is to raise $15,000 to put towards raising awareness about mental health and suicide prevention, in his honor. The first organization they plan to support is On Our Own.

RAYMOND: We're all broken. No one's perfect. We come into the world broken, and we're here just in this life – I would tell him, this life is boot camp. That's why I was so not ready for this. Because I thought I gave him the tools that even on your worst day, guess what? The sun will shine again, I promise. The sun will shine again one day. It might be a week from now, it might be a month from now, but you'll climb out of it and you'll be happy you never made that final choice. I can't believe he made that final choice. I can't believe it. I still can't believe it.

If you or someone you know is considering suicide, please tell a friend or loved one, and contact available resources, such as your local Community Services Board, hospital, or the National Suicide Prevention Lifeline, at 1-800-273-8255.