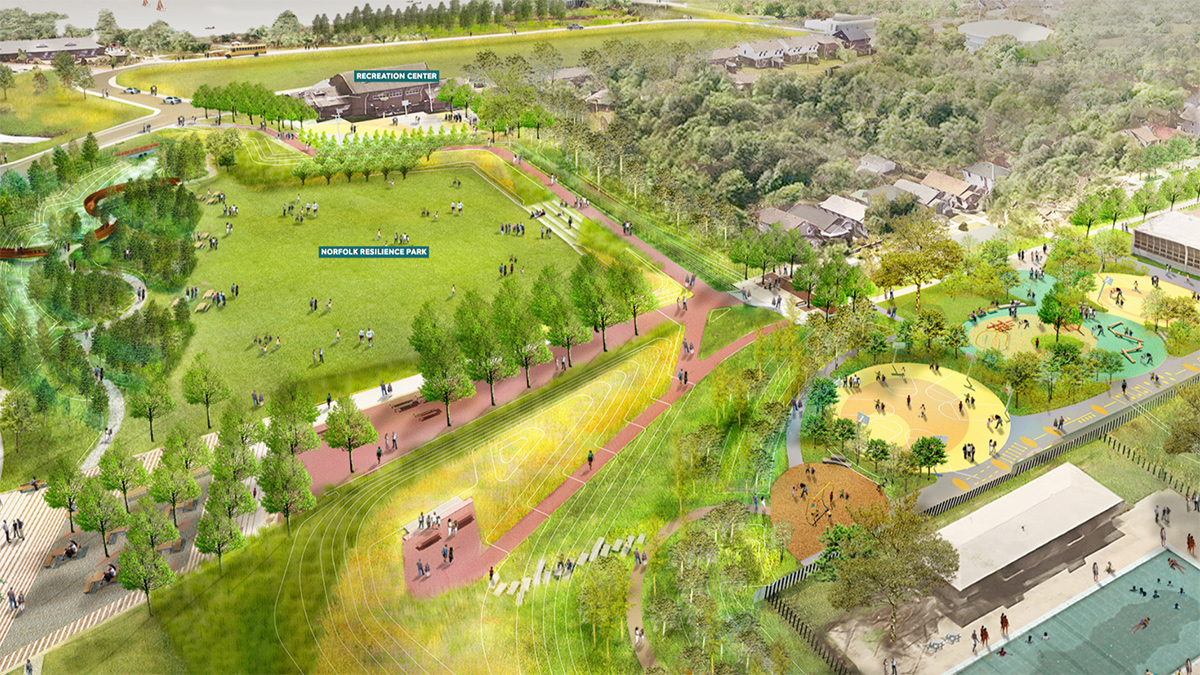 Photo via City of Norfolk. The Ohio Creek Watershed Project is meant to reduce flooding in the Chesterfield Heights and Grandy Village neighborhoods.

Norfolk is at risk of losing funding for a massive sea level rise project due to delays caused by the coronavirus pandemic.

Nearly $113 million in federal money is helping fund the project as part of a national program meant to defend cities against climate-related disasters.

The condition is Norfolk must use the grant money by Fall 2022. Any unspent funding will be forfeited, which could derail the project.

Norfolk Chief Resilience Officer Doug Beaver said the city was already rushing to complete the project and meet the deadline before the COVID-19 outbreak. Delays caused by the pandemic have now increased the possibility the city can't use up the funding in time.

“It will be a challenge to finish by September 2022,” Beaver said, noting that if the city loses the federal money, “the project would go incomplete.”

Other states and localities — including Louisiana, California and New York City — are also receiving federal grants for resilience efforts and face the same problem. Congress has the authority to extend the deadline to use the money and save the projects.

In response to concerns about Norfolk’s delays, Gov. Ralph Northam on May 21 sent a letter to Virginia’s congressional delegation asking federal lawmakers to push the deadline back three years. WHRO Public Media obtained a copy of the letter.

“The flexibility and extension of the grant timeline will allow the City to modify their timeline and be able to expend the funds, provide jobs to people locally and further their efforts on creating a more resilient city,” Northam wrote.

The Obama administration awarded the resilience funds to cities and states in 2016 as part of a program called the National Disaster Resilience Competition. The goal was to foster new methods for responding to climate change. The recipients’ projects would serve as models for other parts of the country.

Virginia won about $121 million for its own resilience efforts. Some of the money has funded the development of a “Coastal Resilience Laboratory and Accelerator Center," which is already in operation in Norfolk. The rest of the funding, nearly $113 million, is supporting the Ohio Creek effort.

Since winning the competition, city officials have been designing and securing permits for the project. The groundbreaking was initially planned for 2019, but was pushed back several months to early 2020 due to cost overruns. Beaver said the delay increased pressure on the city to finish by the 2022 deadline.

Beaver noted that at one point a construction site supervisor got sick, which slowed work production because of concerns he contracted the coronavirus. There were also lags receiving construction materials and equipment due to disruptions to shipping supply chains amid the outbreak.

Other factors continue to slow the project. Beaver said a site plan approval has taken more time than usual because planners are working from home.

The city has also been waiting to relocate families from homes set to be demolished in an area where a berm will be constructed. Norfolk stopped the relocation process when Gov. Northam issued his stay-at-home order to limit the spread of the coronavirus.

“We’ve been at least four to six months delayed due to not being able to demolish those houses," Beaver said.

The disruptions to the Ohio Creek project are the latest example of how the coronavirus has impacted Eastern Virginia's response to the rising seas.

The Hampton Roads Planning District recommends cities prepare for at least 1.5 feet of sea level rise by 2050 and 3 feet by 2080. But several localities have cut resilience funding from their 2021 budgets due to revenue shortfalls caused by the pandemic.

The fate of the Ohio Creek project could now depend on Congress. Lawmakers can vote to extend the deadline for cities and states to use the federal funds. Beaver and Skip Stiles — executive director of a Hampton Roads non-profit working to address the rising seas — said they’re hopeful it will happen.

“It should be a no-brainer for them to extend this,” said Stiles who was involved in the early phases of the project. “The issue would be how soon can Congress move.”

In a statement to WHRO, Sen. Mark Warner of Virginia suggested he might back a congressional move that gives cities and states more time to use the funds.

“My office has been in communication with officials in Norfolk on this issue," Warner said. "We are examining legislative options where critical infrastructure projects will be considered, and I will support this effort.”