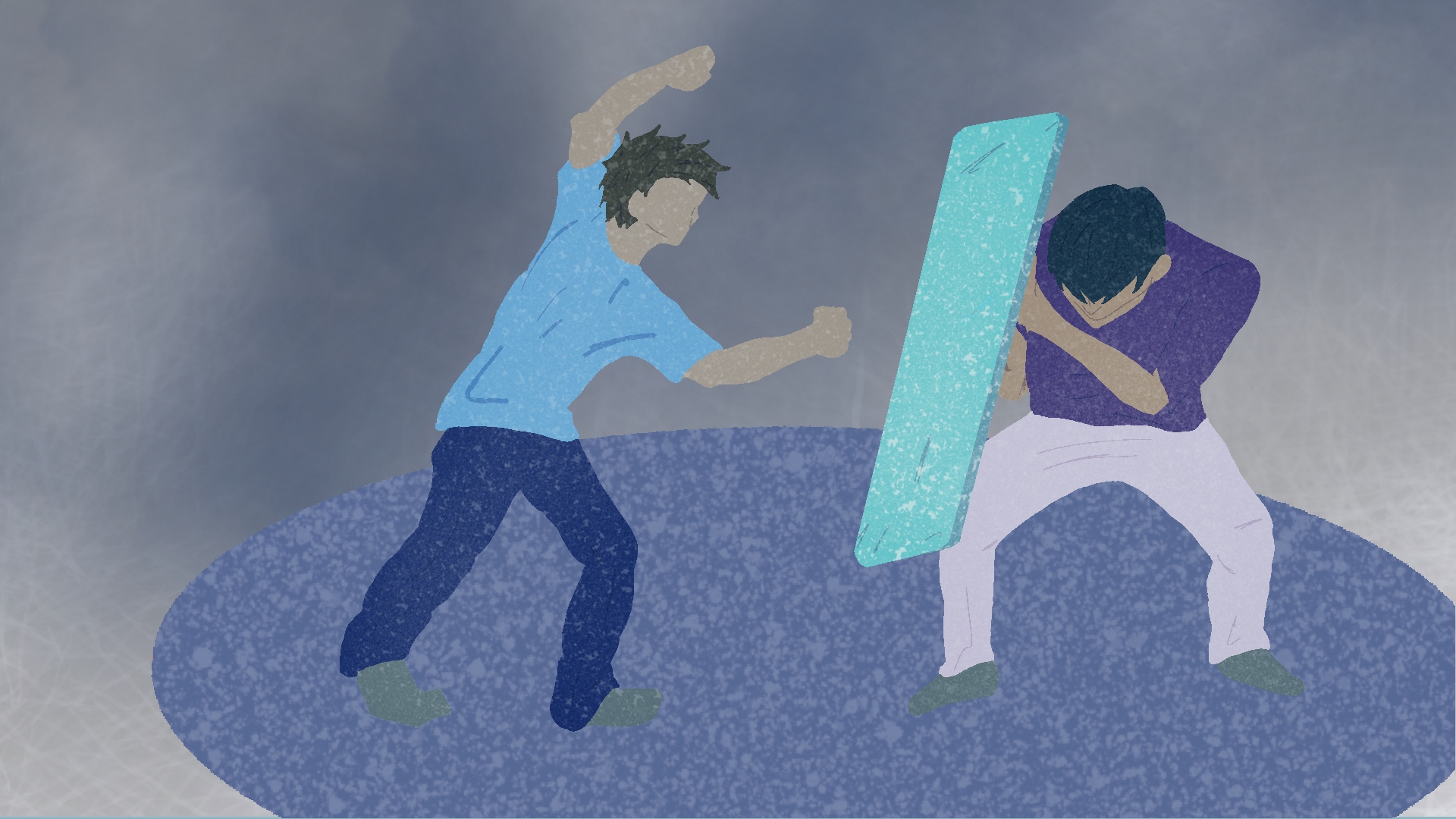 An Alternative To Seclusion And Restraint Was Born In Virginia, And It’s Spreading

Listen to Part 1, Part 2 and Part 3 of this four-part collaborative series.

Andie Plumley works with adults with intellectual and developmental disabilities. She says she learned early that things can sometimes get physical.

“My second day of work here, I got punched in the face,” said Plumley.

Why did this happen? Plumley says the aggression was a form of communication for a man who was non-verbal.

Plumley is Vice President of Support Services of Virginia, a 25 year old Virginia company that provides residential and day services to people with disabilities in Virginia Beach, Lynchburg and Danville.

SSVA doesn’t use any form of physical restraint or seclusion to manage aggressive or self-injurious behavior.

At SSVA in Virginia Beach, Plumley demonstrated how they use a special foam shield to avoid injury. The sky blue shields have handles on the backside, and Plumley explained how to hold them overhead or down low, depending on which part of your body you need to protect.

“People were going to communicate what they needed and if we responded to that, things would be copacetic,” said Plumley.

One key element of Positive Practices is to give a lot of attention to positive behaviors so that these behaviors increase. It’s not a religious doctrine, but it definitely has a spiritual tone.

Plumley says at SSVA, which does not operate any schools, the staff works on “building people up” by treating everyone with unconditional positive regard.

“I'm gonna tell you how much I enjoy spending time with you and mean it and help to build up that self esteem and give you that positive unconditional regard that you deserve as a human being on this planet,” said Plumley.

Plumley says people use behavior to communicate and sometimes, those messages come out as aggression or self harm.

When aggression happens, staff use the cushioned shields to block being hit, and they can use them to protect someone from self-injury if they’re hitting their head against the wall or a table. Before they had the shields, they used cushions, pillows and blankets.

While SSVA has held this philosophy since its beginning, there’s another organization in Virginia that adopted a similar approach more recently.

Grafton Integrated Health Network started providing services to people with learning disabilities 60 years ago. The organization serves over 1,000 people a year throughout its facilities, including three day schools, a residential psychiatric center, about 30 group homes and an outpatient clinic.

For most of its history, Grafton used traditional methods of seclusion and restraint with aggressive and self-harming behaviors.

Kim Sanders has worked at Grafton for three decades. She says about 15 years ago, they saw an increase in the use of restraints and seclusions, and staff were getting injured. Staff injuries were so high, the organization lost its workers compensation insurance.

And it wasn’t just staff receiving injuries. In 2004, a 13-year-old boy who had just moved into their residential program, Garrett Halsey, died after being restrained.

Grafton officials had multiple meetings about how they could reduce the number of seclusions and restraints and avoid injuries. Sanders says CEO Jim Gaynor listened for a while, then said it was time for some kind of action. Sanders says Gaynor asked her and two other people in leadership positions to come up with a plan to reduce the use of restraint and seclusion “without seeing any type of increase in client injuries or staff injuries.”

Over time, Sanders and the staff developed a strategy to use protective objects — things like pillows and couch cushions — to block students from injuring themselves or others instead of using restraint or seclusion. Sanders bought out Kmart’s shipment of bean bag chairs every week. They didn’t last long.

They tried umpire shields and martial arts pads, but nothing was strong enough to sustain a blow, but soft enough to not injure the person hitting it.

Eventually, they designed their own shields following input from the staff, including the size and shape and where the handles should be.

Grafton found a manufacturer in Rhode Island, Amerisewn, to build them and they chose a shade of blue for the shields that was, according to their research, a calming color.

Sound familiar? The shields used at SSVA are the shields developed by Grafton.

When Grafton started using the shields to protect students and staff instead of using restraint and seclusion, Sanders said staff and student injuries decreased.

“Everything started just falling into place for us,” she said.

Grafton completely eliminated seclusion, and has eliminated restraint in all its facilities except its psychiatric residential treatment site, where staff are trained to use restraint. Sanders said there were around 200 restraints a month at that site back in 2003. Now, it’s down to two or three a month.

Not only did Grafton get its workers compensation policy back — Sanders says the insurance company encourages other organizations to adopt Grafton’s methods.

Initially, this method was called “Extraordinary Blocking,” but Sanders says she searched the internet for a better name.

“I searched opposite of restraint, opposite of control. And I found an article that talked about this type of martial arts, ...I guess you could say, philosophy,” said Sanders. “And it used the word a couple times in the article. The word is ‘Ukeru,’ and it means ‘to receive.’”

Ukeru isn’t just about the shields, though that’s how it started.

The goal in this method is creating a “trauma-informed environment.” That means being conscious of the kinds of trauma students and adults have experienced throughout their lives. It can be what Sanders calls “big T” trauma, like sexual or physical abuse, but it’s also “little t” trauma: repeated failures in classrooms, shame, bullying, as well as experiencing seclusion and restraint.

According to Sanders, Grafton has trained staff at more than 190 organizations in the United States and Canada in the Ukeru method and philosophy.

One of these is Woods Services, which operates schools, residential programs, and psychiatric programs serving about 600 people in Pennsylvania and New Jersey.

Mike Haggerty is in charge of external program development at Woods. He said the staff was looking for ways to decrease the use of restraint when they found out about the Ukeru method. A team from Woods visited Grafton to learn more, and after vetting Ukeru, Woods officials made the commitment to incorporate the philosophy and methods into their own program.

Haggerty said two goals are achieved through Ukeru’s trauma-informed philosophy. First, it decreases the use of restraint, which he says always carries a risk. Second, he said “you're helping people to self-advocate, develop a better set of core skills, so that they can be more independent, perhaps more able to communicate their needs and wants, which are critical.”

Haggerty said the program has worked. The only real complaint he received after implementing Ukeru was from the finance department.

“I do know that initially we saw a significant increase in property destruction,” Haggerty said. Furniture, televisions, and windows were damaged--including more than one automobile windshield. “We had to sort of tweak our training around the use of the pad, to use them in a more protective way with the purpose of, you know, ‘let's protect this person's fist as they're punching windows out,’” he said.

Woods began using Ukeru at the beginning of 2018. That year, the number of restraints in its programs decreased by over 54 percent, from 146 restraints in February to 66 in December.

“Would I love to see the zero restraint? I absolutely would,” he said. “But you run the risk of serious injury occurring to a very fragile population and the people that are trying to support them.”

He said restraint is appropriate to protect students from injury only when there’s no other option, after all other conflict resolution techniques have been exhausted. While restraint is the option of last resort, he doesn’t see removing it from the table in crisis situations.

I asked Grafton’s Kim Sanders if she thinks restraint can be entirely eliminated, even for the most severe cases of aggressive and self-injurious behavior. She believes it can.

“I don't know, maybe I won't see it in my life,” said Sanders. “But I definitely see a time, maybe it'll be 50 years from now where people will look back and think like, oh my gosh, I can't believe that we used to do this to people.”

WHRV’s reporting found one published study from 2018 about the effectiveness of using the Ukeru method to address aggressive behavior. The authors, Jason H. Craig and Kim

Sanders, were both Grafton employees when the study was conducted.

Like many new practices throughout special education, it’s likely the method will gain additional attention from other researchers in the future.