Mike Lofgren, a former congressional staffer, wrote The Deep State in 2016. While the term is now widely in use, it's not in the way that Lofgren intended. He appears here on a PBS program hosted by commentator Bill Moyers.

Mike Lofgren is the very definition of a civil servant. He was a congressional staffer for 28 years, with most of that time spent crunching numbers on the Senate and House budget committees.

He's moderate and mild-mannered, saying, "I was on the Republican side my whole career. I wasn't a culture wars Republican, basically a fiscal conservative in the manner of say, [President Dwight] Eisenhower."

Lofgren was turned off by the Tea Party Republicans who came into Congress in 2011, and decided it was time to quit. Three years later, Lofgren wrote an essay called, "Anatomy of the Deep State."

The essay is not partisan. Lofgren criticizes both parties, along with the national security community, Wall Street and Silicon Valley. And he takes pains to point out that he's not a conspiracy theorist.

His basic point is that big institutions, inside and outside of government, are so entrenched it's hard to bring any real change. Political options are limited.

"This is not to say it's the worst of all worlds," Lofgren said. "You sort of get a choice between Coke and New Coke."

His idea first gained traction among progressives who felt Republicans were pursuing a scorched-earth policy to thwart President Barack Obama.

In fact, Lofgren wrote his essay for the website of liberal commentator Bill Moyers, and also appeared on the PBS program he hosted.

The state of 'deep state'

Lofgren expanded his essay into a 2016 book called: The Deep State: The Fall Of The Constitution And The Rise Of A Shadow Government. The book got some favorable reviews, but didn't set the publishing world on fire.

"Unelected, deep state operatives who defy the voters, to push their own secret agendas, are truly a threat to democracy itself," Trump said at a rally last year, one of the many times he's invoked the term.

For the president and his supporters, deep state is shorthand for Democratic-leaning bureaucrats who want to undermine Trump.

Breitbart began extensive coverage to "deep state" stories around the time Trump entered office, and others have followed. In a search of TV transcripts, the term "deep state" appeared only 64 times in 2016, the year Lofgren published his book.

And it's rarely, if ever, used the way Mike Lofgren intended.

"It's like I released this species into the wild and what it did, or maybe it's a Frankenstein, and what it does is not within my control," he said.

The idea of a conspiratorial deep state goes back centuries. Some trace it to ancient Rome. In recent decades, it has been used to describe countries such as Turkey and Pakistan, where the security forces were seen as dictating orders to elected governments.

Lofgren says he first encountered the term in a spy novel A Delicate Truth by John le Carre, who describes the hidden power brokers at work in Great Britain.

Now it pops up everywhere.

"Thank God for the deep state," said John McLaughlin, the former deputy director of the CIA. He spoke ironically, drawing laughs when he made the remark at a recent panel discussion at George Mason University.

But he was making a serious point as he spoke about government officials testifying before congressional committees at the impeachment inquiry.

"Everyone here has seen this progression of diplomats, and intelligence officers and White House people trooping up to Capitol Hill right now, and saying, 'These are people who are doing their duty,'" McLaughlin said.

When we caught up with McLaughlin a few days later, he said he had received some blowback for those comments. Then he went on to say:

"I think it's a silly idea. There is no 'deep state.' What people think of as the 'deep state' is just the American civil service, social security, the people who fix the roads, health and human services, Medicare."

Mike Lofgren, now retired at age 66, used to be one of those people when he was a Republican congressional staffer. Today, he says he's turned his back on the Republican Party.

"I am an independent who will not vote Republican until they demonstrate to me that they've purged Trumpism and that they're a sane party," he said. 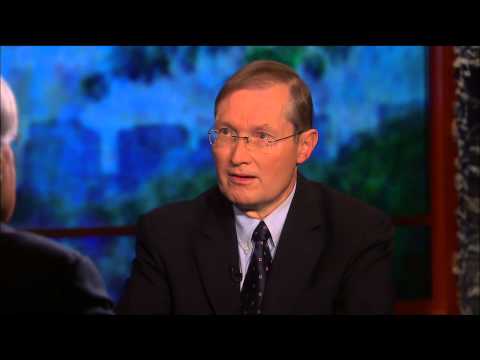 Mike Lofgren, a former congressional staffer, wrote The Deep State in 2016. While the term is now widely in use, it's not in the way that Lofgren intended. He appears here on a PBS program hosted by commentator Bill Moyers.Moyers & Company - YouTube

Rachel Treisman is an intern on NPR's National Desk.