Engineer Joel Steinkraus tests solar panels on one of two CubeSats that made up NASA's Mars Cube One mission. The MarCO CubeSats — the first to be sent into deep space — flew to Mars and relayed telemetry from NASA's InSight lander.

Tiny satellites are taking on a big-time role in space exploration.

CubeSats are small, only about twice the size of a Rubik's Cube. As the name suggests, they're cube-shaped, 4 inches on each side, and weigh in at about 3 pounds. But with the miniaturization of electronics, it's become possible to pack a sophisticated mission into a tiny package.

CubeSats have been around since 1999. Two professors, Jordi Puig-Suari from California Polytechnic State University and Bob Twiggs from Stanford University, wanted to standardize the design specifications of what they termed "picosatellites." That would make it easier for teams of college students anywhere in the world to collaborate. What's more, they were cheap enough that even students could make one.

"I saw a flyer on a bus stop that said, 'Want to build a satellite?' " says Hannah Goldberg. At the time, in 1999, she was an undergraduate engineering major at the University of Michigan. The flyer caught her attention, and she decided that building satellites was exactly what she wanted to do.

"In the beginning, in the early days of CubeSats, they kind of had a bad reputation," Goldberg says. "People didn't think you could do much science or much engineering benefit with them."

And in the beginning, that was probably true. After all, they were initially intended as tools for students learning the principles of aerospace engineering. If they broke after a few months in space, no big deal.

Still, they were cautious about signing onto a mission that relied on a CubeSat, says Barbara Cohen, a planetary scientist at NASA's Goddard Space Flight Center.

"We want to get science out of it," Cohen says. "We don't want it to be throwing something into space for the sake of in three months becoming space debris."

Now, however, she thinks CubeSats are ready for prime time.

"It's a miniature spacecraft," she says. "That's actually the way we think about it."

Cohen is principal investigator for a mission called Lunar Flashlight. It's actually what's known as a 6-U CubeSat, essentially six CubeSats stuck together. The final product is about as big as a family-sized cereal box. 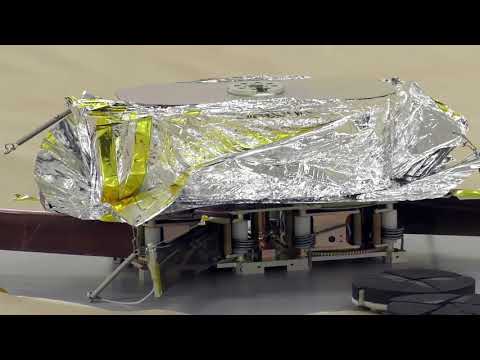 "Lunar Flashlight is designed to look for exposed water frost in the permanently shadowed regions of the moon," she says.

The deep craters at the moon's south pole never see the sunlight, and the temperatures drop to about 35 degrees above absolute zero. The spacecraft will shine a laser into those craters and measure what kind of light is reflected back. That will help scientists decide whether there's an icy frost at the bottom of the crater.

Finding water would be a boon for future attempts to sustain human habitats on the moon. "It would be a resource for living off the land if we could find enough of it there," Cohen says.

One of the reasons CubeSats can be so small and light is they don't have to have a rocket engine to propel them into space. They can hitch a ride on other missions' rockets. But Cohen says that even if you get a lift from someone else, if you're going to the moon or some other spot outside Earth's orbit, you still need to have some kind of propulsion system to be able to change course.

"About one-third of our satellite is dedicated to our propulsion system," she says.

Lunar Flashlight uses a fairly standard thruster system for its propulsion, but there are a lot of ways to propel through space.

"A solar sail is large, thin-film reflective surface," Lockett says. "Think of like a sailboat or a large kite. But instead of using wind to propel itself, it uses sunlight."

The sail is folded up for launch, a process done by hand that takes weeks. Unfurled, the sail is bigger than a highway billboard, completely dwarfing the tiny box it emerged from.

One of the reasons scientists like CubeSat missions is they're cheap compared with major science satellites such as the Hubble Space Telescope, so you can have them all to yourself.

"Hubble is shared by hundreds of people every year," says astronomer Evgenya Shkolnik of Arizona State University, who has been using the telescope to study stars. "And even though our team has a large program, what's considered a large program on Hubble, it's still only a week of time."

Shkolnik studies the radiation environment around stars that have planets orbiting them. Understanding that environment will be crucial in determining whether exoplanets have atmospheres. To do that work, she needs to point a telescope at the stars for as long as possible. That's why she's working on a CubeSat called SPARCS, the Star-Planet Activity Research CubeSat.

"This way if you build what you need for one very clear experiment, then you can have the full year to do one experiment really well," Shkolnik says.

She thinks more scientists will be turning to miniature satellites in the future.