Democratic presidential candidate Julián Castro walked with a group of asylum-seekers and their lawyers from Mexico to Texas on Monday. Hours later, CBP released the asylum-seekers back into Mexico.

12 Asylum-Seekers Julián Castro Escorted To The U.S. Border Sent Back To Mexico

Democratic presidential candidate Julián Castro knew he had to do something when he heard what was happening to LGBTQ and disabled asylum-seekers at the border.

On Monday, Castro crossed into Matamoros, Mexico, to meet with a dozen asylum-seekers who have been waiting there under the Trump administration's Migrant Protection Protocols policy, also known as Remain in Mexico. The asylum-seekers were hoping they could be allowed to wait in the United States for their immigration court dates instead of in Mexico, where they said they faced violence and harassment because they identify as LGBTQ.

Castro walked with the group and their lawyers across the international bridge and asked Customs and Border Protection to allow them in, claiming an exemption to the MPP because of their status.

"These families and these individuals can't spend one more night or day here, and we need this to work," said Dani Marrero Hi of the Texas Civil Rights Project. Last week, Marrero Hi asked Castro to join her at the border to try to help LGBTQ and disabled asylum-seekers during NPR's Off Script series of conversations with undecided voters and presidential candidates.

The Remain in Mexico policy is supposed to allow for "vulnerable" populations to circumvent the program. Immigration attorneys and the Texas Civil Rights Project have been advocating for CBP to conduct non-refoulement interviews with members of the LGBTQ community seeking asylum, a process that allows them to be taken out of the MPP process.

'I Have To Ask You This': Julián Castro Pressed By Immigration Activist | Off Script | NPR 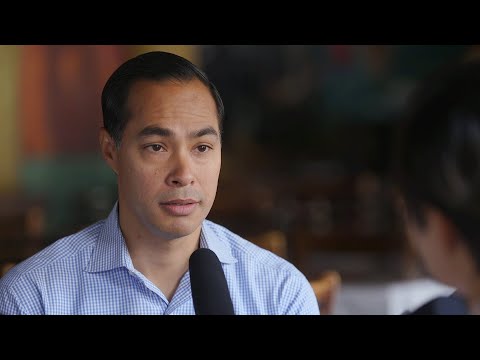 CBP admitted the group and agreed to reprocess them.

Afterward while addressing reporters, Castro again called for an end to the Trump administration's Remain in Mexico policy.

"I hope that people in this country who say they're Jesus-loving, God-loving, that they pay more attention to God-loving, Jesus-loving people on this side of the border that are brown-skinned that are desperate and are being treated cruelly by this president," he said.

Hours later, CBP released the asylum-seekers back into Mexico, according to the Texas Civil Rights Project.

"This is a brutal blow to due process. These 12 people have been in CBP custody for 3 hours, which means that each person had less than 15 minutes for their non-refoulement interviews," the group tweeted in a statement.

One Cuban migrant who was optimistic while waiting for Castro to arrive was devastated when the group had to return.

"I thought this would end and that we would have an opportunity to be free, but I realized that wasn't the case," she said.