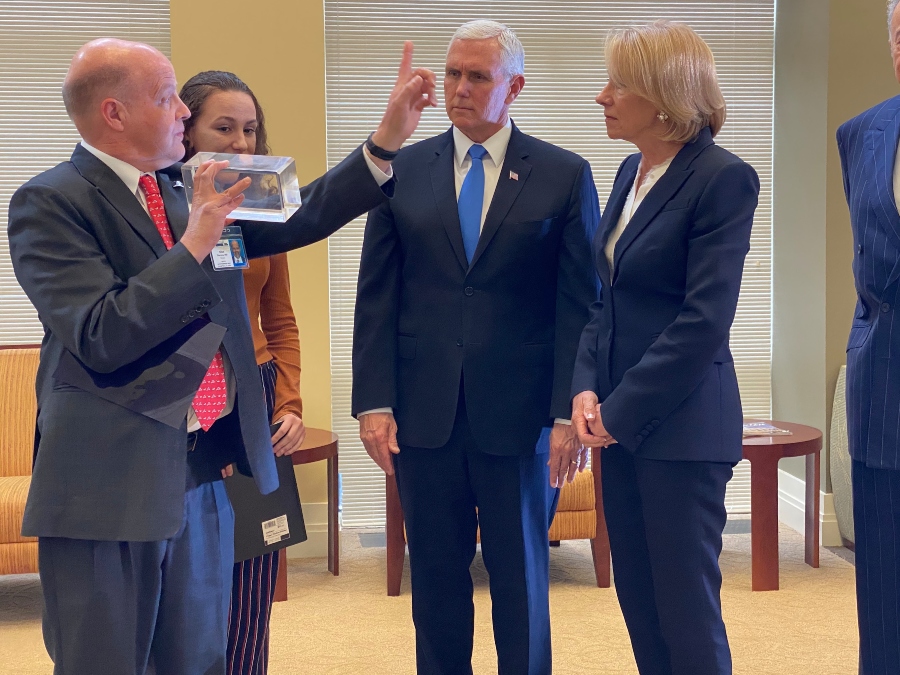 Doctor Allen Thornton launched the first proton therapy lab in Indiana when Mike Pence was governor of the state.

Now a doctor at Hampton University’s Proton Therapy Institute, he hoped Pence’s familiarity with the non-invasive cancer treatment would convince him it’s worth some federal support.

“We really want him to get the (Veteran’s Administration) to invest here,” Thornton said before Pence arrived for his visit. “If the VA could own part of it, it would be great.”

Pence visited Hampton’s institute this week to celebrate Black History Month, his office said in a press release. The stop was sandwiched between a stop at Langley Research Center and a closed meeting with military personnel at Naval Air Station Oceana.

With Secretary of Education Betsy DeVos, the stop at Hampton was meant to be a victory lap of sorts for the vice president to highlight investments made by President Donald Trump in historically black colleges like Hampton University.

He mentioned a major win for HBCUs – the inclusion of permanent money for minority-serving institutions (including HBCUs) in the federal budget.

“The increases, the investment is all a reflection of the quality of education, the importance of this educational tradition in our country,” Pence said before a closed roundtable discussion with Hampton officials and students.

Pence met with some of the center's former patients, including several veterans. He spoke about the Institute, calling it innovative and congratulating Hampton President William Harvey for its creation and growth.

Hampton is the only historically black college in the country that has a proton therapy facility.

Hampton’s proton therapy institute has made it a priority to treat former and current service members. That often means overcoming obstacles like navigating the Veteran’s Administration health care system to be approved for proton therapy.

The VA Hospital in Hampton has been “challenging” to work with, Thornton said.

Thornton said even if Pence and the Trump administration can’t provide money, they could provide support to “smooth the pathway” for veterans seeking proton therapy.

Proton therapy is slightly more expensive than traditional radiation. But it cuts down on the potential for future problems, which can ultimately save the patient time and money, Thornton said.

It’s non-invasive and more targeted, which can spare damage to organs around cancerous tissue and helps avoid severe side effects of traditional cancer treatment like hair loss and burns.

“I want Mr. Pence to realize what a gold mine of technology and resources we have here for our patients, the population in general and our veterans,” Thornton said.

“It pains me when veterans do not have equal access to this wonderful therapy.”