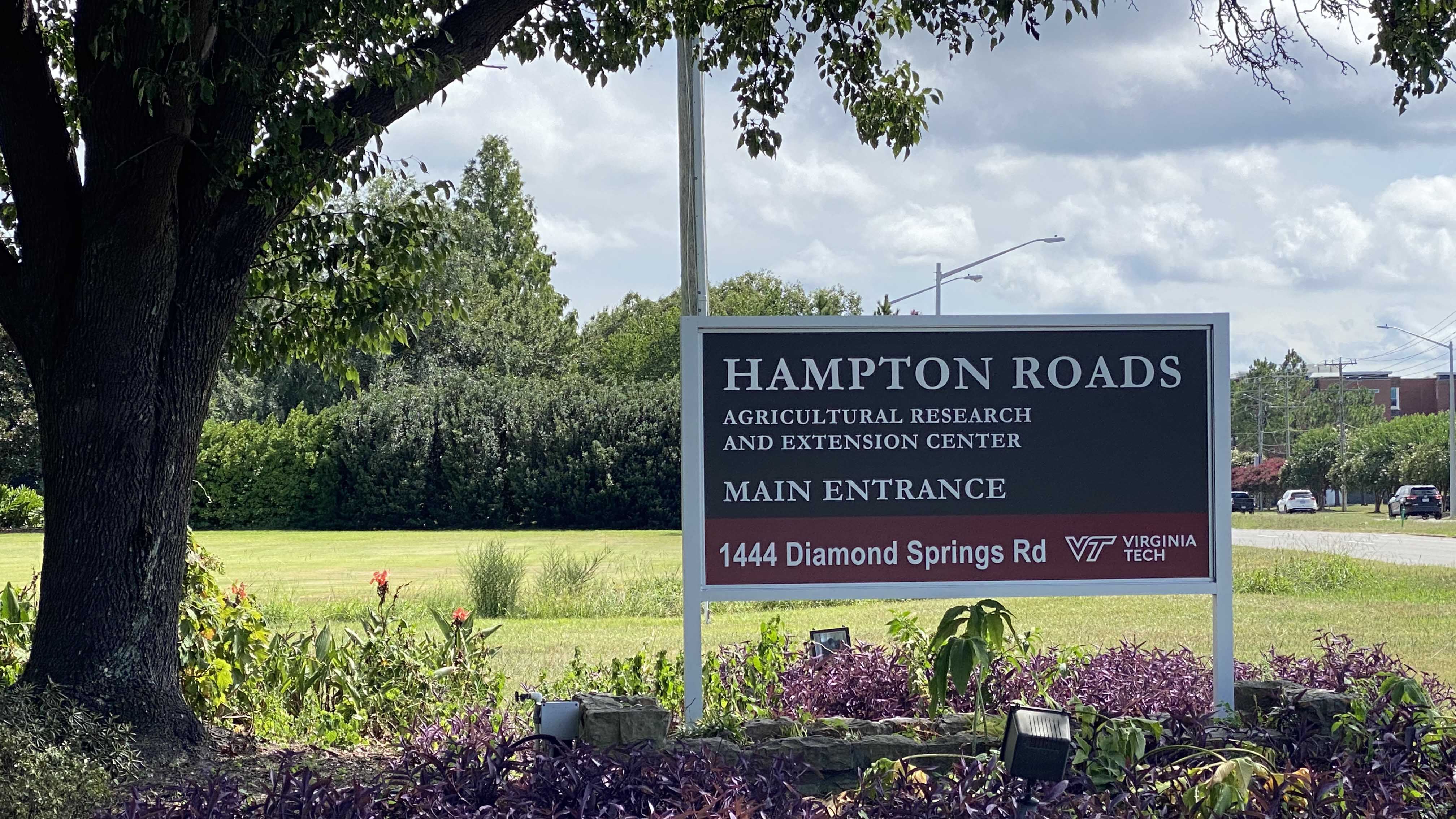 Photo by Katherine Hafner. A sign marks the entrance to the Hampton Roads Agricultural Research and Extension Center in Virginia Beach.

A group of local gardening enthusiasts, environmental advocates and other community members are pushing back against the potential relocation of the Hampton Roads Agricultural Research and Extension Center.

The 71-acre spot is on Diamond Springs Road in Virginia Beach, along the Norfolk border and near transportation hubs including the Norfolk International Airport.

The center has grown in scope at the site for over a century, now run by Virginia Tech as part of its statewide network of extension centers.

Developers have long eyed the tract of land, one of the few remaining large parcels in Virginia Beach in the heart of an urban corridor.

A new legislative funding proposal would allocate $100 million for moving the center to farmland in the southern part of the city.

It’s drawing significant public opposition from a group called “Save AREC.” A Change.org petition against the relocation had more than 700 signatures by Tuesday morning, with the number steadily growing.

The center “has provided vital research, open space, gardens & community building amenities for Hampton Roads & Virginia for decades exactly where it is,” the group writes on its website.

Del. Barry Knight, a Virginia Beach Republican who introduced the funding proposal at the General Assembly session, said in a voicemail that approving the money wouldn’t force a move.

A recent study completed by Virginia Tech is “just looking to see if it was feasible to move it from city-owned land that was very valuable for maybe economic development, to farmland that the city owns,” he said.

“It’s just in the study phases, that’s all it is. So it looks to me like it’s a whole lot much ado about nothin.’”

Developers and city staff have been discussing possibly relocating the center for years.

Most of the land – 58 acres – is owned by Virginia Beach. The state and city of Norfolk each own smaller parcels.

The first formal attempt to relocate the center began last year as an amendment tucked into the larger state budget.

Introduced by Del. Knight, the amendment allocated half a million dollars for Virginia Tech to study what it would take to take down their current location and set up elsewhere in the city.

The Hampton Roads center started as a vegetable co-op in the early 20th century when vegetables were a more common crop on the Southside, Derr said.

It became a Virginia Tech extension center in the 1980s and now houses a host of office buildings, greenhouses and public gardens.

In 1920, the co-op had ceded the land to the state to serve as a research station focused on improving local crop production. They then leased it for 99 years, which ended a few years ago.

Around then, city officials met with school leaders about moving to rural southern Virginia Beach. It was rumored a major company wanted the current spot for a warehouse.

The extension center ultimately renewed its lease, which settled the issue until the recent legislation.

Virginia Beach spokesperson Jina Gaines said in an email that the City Council has not yet taken a position on the issue.

Nearly everything related to economic development has to go through the council and the city’s Development Authority, she said. That includes whether or not they want city staff to provide a recommendation for them to consider, and if so, how funding would then need to be secured.

The school’s consultant looked at two potential new locations: Brown Farm and Brenneman Farm. Both are along North Landing Road, just west of Kellam High School and the Municipal Center.

The report found that the soil at both farms, which primarily grow soybeans and corn, have water near or at the surface year-round and are “poorly-drained.”

Such conditions would be harmful to the types of research plants grown at the agricultural center, the consultant said.

The center currently conducts a wide range of experiments, such as which turfgrass variety or strawberry crop fares best under certain conditions and how nurseries can control weeds

At the existing site, the report says, “the soil quality, elevation, drainage, and irrigation infrastructure are key to successful research activities.”

Replicating those soil conditions would be costly and difficult, they wrote.

Ultimately, some research wouldn’t be able to transfer, especially those focused on researching plants specifically within an urban environment.

Other challenges of the new sites include increased flood risks from sea level rise, potential complaints from neighbors and loud jet noises.

On the other hand, the report notes new construction at one of the sites could improve the condition and technological capabilities of the AREC’s facilities.

Virginia Tech estimates a relocation would take about five and a half years and cost between $106 million and $119 million for one of the proposed farm sites.

Local landscape designer Trista Imrich said she’s gone to the agricultural center for many reasons over the years, from learning about plant species during her initial certification to later teaching about sustainable landscaping and taking clients there.

The dozens of acres of green space deserve to be preserved in their own right, she said. There are environmental and stormwater benefits from the native species and hundred-year-old trees, for instance.

But practically, she also worries that many of its unique aspects will be lost.

“All of the history and all of the environmental showcasing, everything that’s been done over the years there, it just can’t be recreated quickly,” Imrich said. “And no amount of money really is going to get it there any more quickly. You can't make a tree grow any faster.”