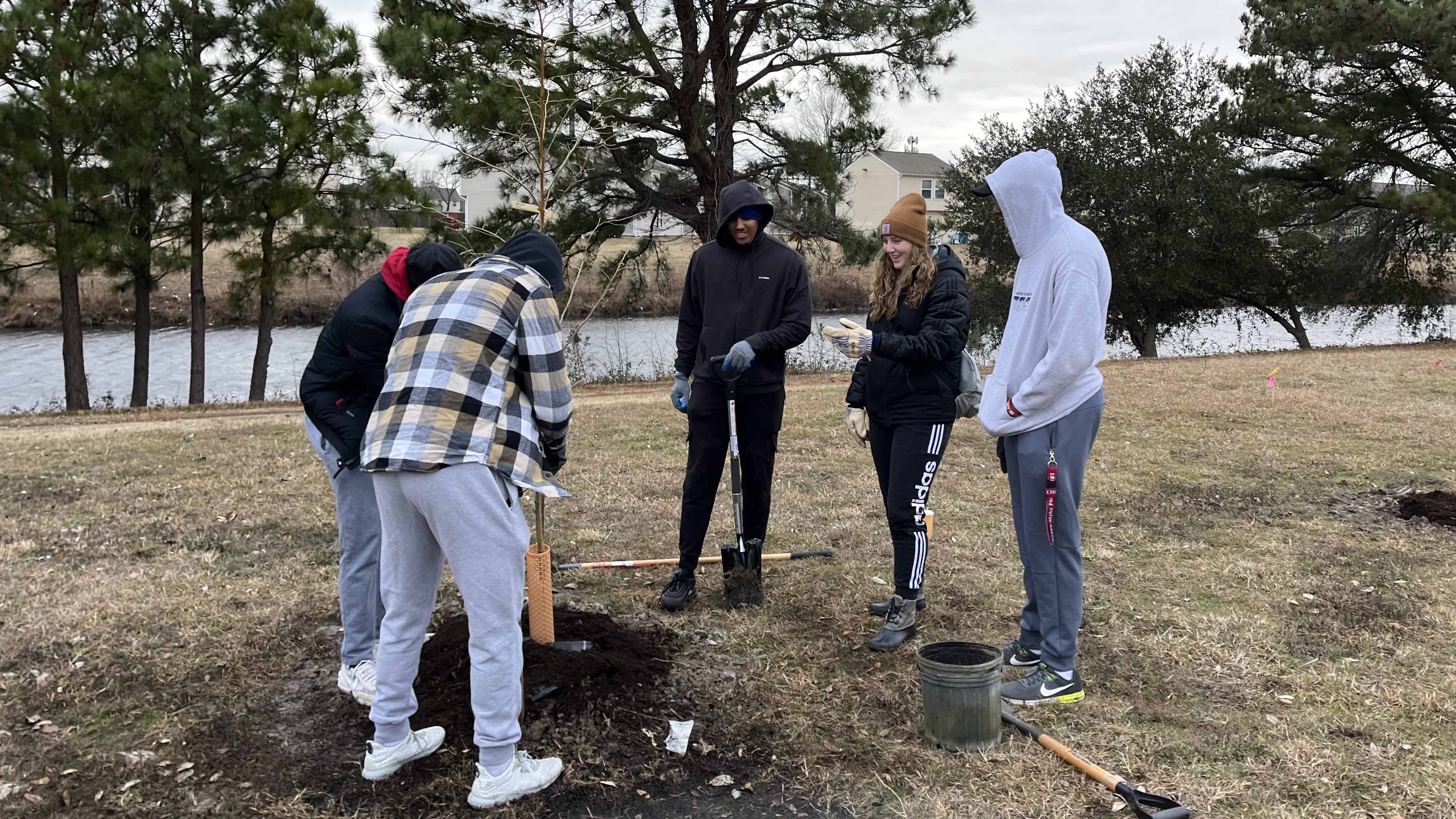 Photo courtesy of Elizabeth Malcolm. Volunteers, including Virginia Wesleyan University students, plant trees at a spot in the Green Run neighborhood identified as one of the most vulnerable in Virginia Beach to extreme heat.

How hot it feels in Virginia Beach depends on where you live.

In Virginia Beach, Green Run is one of those areas, according to Elizabeth Malcolm, a professor and director of sustainability at Virginia Wesleyan University.

She helped lead a heat mapping study of the city in 2021 that revealed which spots suffer most acutely from extreme heat. Those neighborhoods have less shade and green space, which can cool areas down.

Virginia Wesleyan was one of 10 colleges that did so throughout the Commonwealth that July, funded by the Virginia Foundation for Independent Colleges.

The group wanted to learn more about extreme heat, which is often the leading cause of weather-related death and illness each year.

Jeremy Hoffman, David and Jane Cohn scientist at the Science Museum of Virginia, is one of the country’s foremost experts on the issue and was also part of the mapping effort.

That allows for good long-term analysis, but temperatures can vary within a few city blocks, he said. They wanted more detailed information to guide local decision-making.

Volunteers in Virginia Beach collected temperature data from across the city at various points in the day.

They found that some areas were up to 15 degrees hotter than others, Malcolm said, ranging from 82 degrees to 97.

“The hottest areas were those that had the most pavement and urbanization,” she said. “Cooler areas had more vegetation and were also closer to the water.”

That aligns with what’s known as the urban heat island effect.

Marginalized communities often bear the brunt of extreme heat, including those predominantly home to people of color or those with lower average incomes.

That’s the legacy of discrimination in urban planning, including redlining.

Malcolm said officials used the mapping data to look at where they could help, using a grant from the Virginia Department of Forestry.

Many places throughout the city could use more trees, especially those further from the bay and ocean. However, some urban spots are already too dense to plant them, she said.

Eventually they found a space in Green Run, which is also the site of a new Samaritan House shelter for child victims of human trafficking.

Over the weekend, dozens of volunteers planted more than 60 native trees there, including black gum, hackberry and sycamore species.

The nonprofit Lynnhaven River NOW helped with the project and is also using a separate grant to plant trees in Green Run.

It’s an added benefit that the new trees will serve youths needing to heal, Malcolm said.

“We know from other research studies that green spaces and trees and spending time in nature helps people physiologically.”