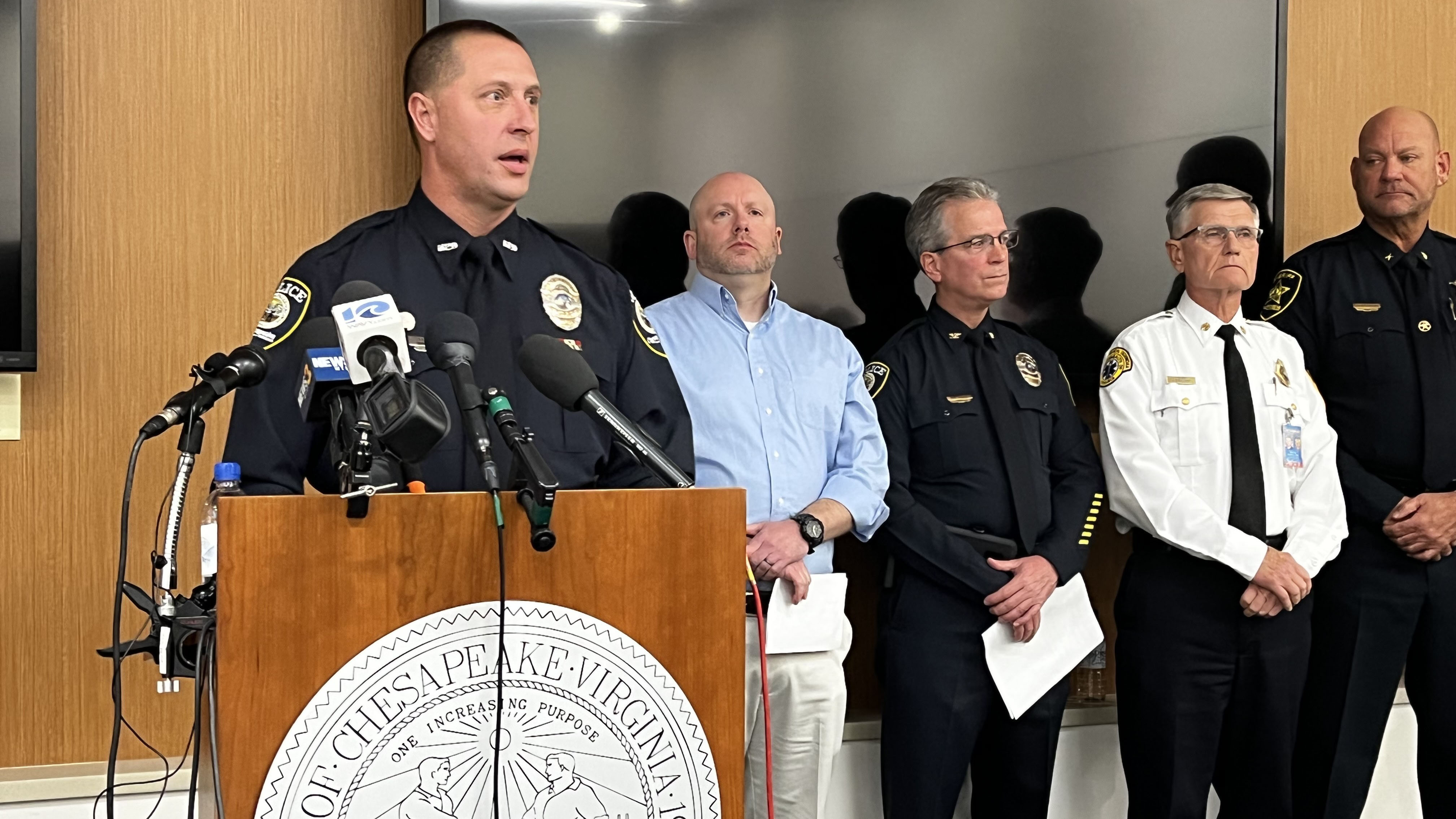 Photo by Ryan Murphy. Chesapeake officials hold a press conference on Wednesday, Nov. 23 to discuss a mass shooting at the Sam’s Circle Walmart the night before.

At least 50 people were in the store at the time.

The shooter was an overnight team lead and had worked at Walmart since 2010, the company said.

The City of Chesapeake confirmed the shooter, who had no criminal record, used a 9-millimeter handgun purchased the morning of the attack.

He did not buy it from Walmart.

Police, when pressed on the shooter's motive, released a note found on his phone titled "death note." Police redacted what appear to be several names.

This note may be disturbing for readers. Please proceed with discretion.

The shooter wrote that he felt other employees "mocked" and "betrayed" him.

"They laughed at me and said that I was like Jeffrey Dahmer," the note says.

Chesapeake police arrived at the scene around 10:15 p.m. and found two people dead in the store's break room as well as the shooter, who appeared to have shot and killed himself.

Another victim was found dead by the front of the store, and three more later died at local hospitals.

On Wednesday evening, police released the names of those who were killed in the incident.

They are Fernando Chevez-Barron, Lorenzo Gamble, Brian Pendleton, Tyneka Johnson, Randall Blevins and Kellie Pyle. Chavez-Barron's name was initially witheld because he was a minor.

"The City of Chesapeake has always been known as the 'City That Cares' and now, more than ever, we know our City will show up and care for those who need it most," city officials wrote when releasing the victim identities.

We are saddened to announce the names of those we lost on Tuesday evening: Lorenzo Gamble, Brian Pendleton, Kellie Pyle, Randall Blevins, and Tyneka Johnson. (1/2)

Six other people were treated for injuries, and police said they're still looking for more who may self-report. One victim is currently in critical condition.

The store at Sam's Circle will be closed for several days while detectives collect evidence.

On Wednesday morning, police were guarding a home in Greenbrier listed under the shooter's name. The door to the house had been forced in and a glass storm door shattered.

The city's SWAT team executed a search warrant there and cleared the house with state police, they later said.

Leaders across the region, state and country have commented on the tragedy.

"Your Chesapeake community is here for you and will continue to be here for you during the difficult days, months and years ahead," Solesky said at the news conference.

"I am devastated by the senseless act of violence that took place late last night in our City," West said in a statement. "Chesapeake is a tightknit community and we are all shaken by this news."

Gov. Glenn Youngkin said in a tweet that he's in contact with local law enforcement and is making available any resources they need.

He also ordered that flags throughout Virginia be flown at half-staff through this weekend "in respect and memory" of the Chesapeake victims.

"Heinous acts of violence have no place in our communities," he said.

Our hearts break with the community of Chesapeake this morning. I remain in contact with law enforcement officials throughout this morning and have made available any resources as this investigation moves forward. Heinous acts of violence have no place in our communities.

The FBI's Norfolk office has set up a tip hotline to learn more about the shooting. Anyone with information can call 1-800-CALL-FBI.

"Tomorrow is Thanksgiving, one of our most cherished holidays that brings us together as Americans and as families, when we hug our loved ones and count our blessings. But because of yet another horrific and senseless act of violence, there are now even more tables across the country that will have empty seats this Thanksgiving," Biden wrote.

"There are now more families who know the worst kind of loss and pain imaginable."

"We are shocked at this tragic event at our Chesapeake, Virginia store," the company said. "We’re praying for those impacted, the community and our associates. We’re working closely with law enforcement, and we are focused on supporting our associates."

Officials have set up a family reunification area at the Chesapeake Conference Center. Anyone looking to check on employees or people who may have been in the store should go there at 700 Conference Center Drive.

This is a developing story and will be updated.