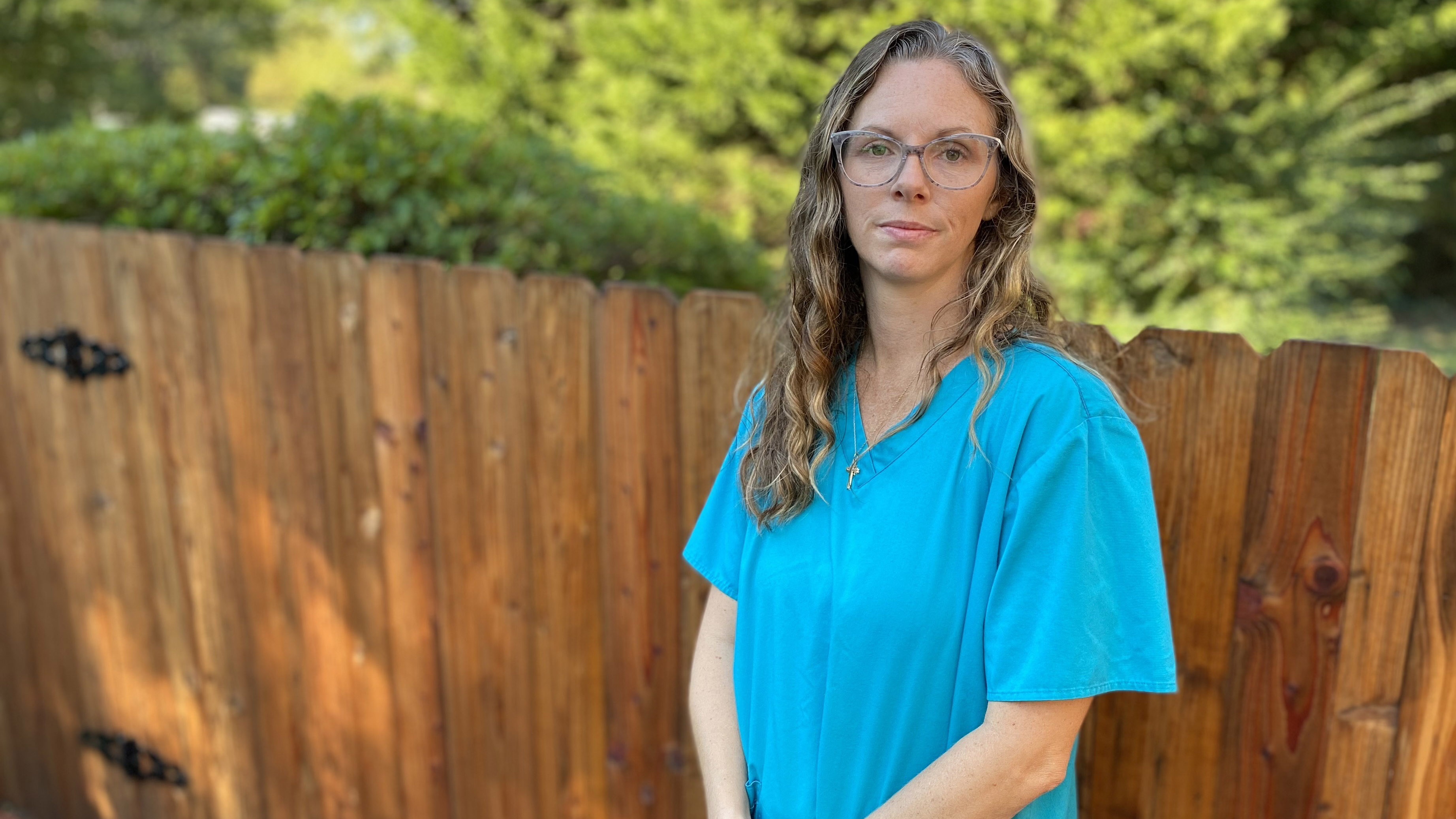 Photo by Katherine Hafner. Megan Temple, a nurse who struggles with long COVID, pictured at her home in Western Branch in October 2022.

Megan Temple is well-versed in the medical system.

As a registered nurse, she’s seen a lot and worked in a range of settings including hospitals, home health and prison medical departments.

But she didn’t know just how much that knowledge would come in handy over the past year.

Ever since, she’s dealt with an ever-changing list of symptoms, a confusing web of conflicting information and a mysterious disease still too unknown to fully understand.

Temple’s one of many people who have gotten COVID-19 and still feel afflicted. Medical professionals call it long or long-haul COVID.

The phenomenon means feeling lasting impacts from the virus months or even years after first falling ill – even if the initial infection was mild.

Health officials now estimate between 10-30% of COVID patients may become long-haulers. Many have symptoms clear up within a few months, while for others, no end is in sight.

Temple lives in the Western Branch area of Chesapeake with her husband, mother and three homeschooled children aged 3 to 13.

When the pandemic struck, she was already working from home doing case management for an insurance company.

Her family fared pretty well and got over the illness quickly.

But in the weeks and months that followed, things got worse for Temple, who'd also been recovering from abdominal surgery.

At one point, she couldn’t sleep for 48 hours, or sit for more than a few minutes at a time.

“It sounds very strange, but I just felt like I was going to die,” she said, “like my body was going to shut down.”

Temple had heart attack-like chest pains that sent her to the hospital. She started losing muscle coordination and feeling confused.

“I could not think or remember how to use my phone, so I couldn’t call for help,” she said. “It was very scary.”

She also lost hair, experienced vision changes and more. At times over the past year she went to the emergency room multiple times per week.

It was isolating to not even be able to converse with her family due to the brain fog.

“There was a laundry list of symptoms. I think if there was a symptom, I had it,” Temple said. “I did not feel like I was working well. I felt like I couldn’t be a good mom. I wasn’t a good wife.”

The hardest part of her long COVID experience, though, was the response from the medical system, she said.

While she encountered many supportive doctors and staff along the way, others didn’t believe certain aspects, didn’t pursue further testing or threw up their hands about helping, she said.

Temple spent thousands on medical appointments, testing, functional medicine and supplements she sought out after her own research. That’s after insurance.

Medical professionals have patients slowly add in exercise and build back their confidence in movement while under expert care.

It helped to get back into exercise while being watched for any heart problems that arise, she said. She also now tries to be more present with her family.

“It brings into focus your mortality I guess. And that is not necessarily a bad thing.”

It’s been around for years to help patients who had heart attacks and surgeries get back to their baseline or better activity level, she said.

When COVID-19 hit, the rehab started filling up with those patients, eventually deemed long-haulers.

“If you are just so chronically fatigued and having these symptoms when you move around, you get kind of stuck in a rut like a hamster in a wheel, that you just can’t get out of it,” Krishnan said.

The program puts patients on treadmills and other equipment and observes them to see what elicits symptoms. Then they help make a slow, step-by-step regimen to build back stamina.

Krishnan said health professionals have been able to find out a little more over time about what helps long COVID patients, or what could be behind symptoms that often don’t show up on test results.

Autonomic dysfunction may play a big role, for example – “the immune system is kind of activated and inappropriately continuing to be activated despite the resolution of the infection,” she said.

But there’s still a lot they don’t know. There’s such a dizzying range of symptoms that it can be challenging and frustrating for doctors as well as their patients.

There’s been plenty of talk about physician burnout during the pandemic. A big part is compassion fatigue, Krishnan said.

“You’re seeing patient after patient who are not just riddled with symptoms, but essentially crying in your office because they lost their job or they don't have a way to take care of their kids. … It’s humbling every day hearing how many people are suffering in different ways.”

Over at Sentara Norfolk General, Dr. Xian Qiao focuses almost exclusively on post-COVID patients. In late 2020 he started a long-haulers clinic that now has a monthslong waiting list.

It began because health workers there were concerned about COVID patients going home after hospitalization with lung damage, he said.

As a pulmonologist, he took a special interest and wanted to be able to follow up with patients and see how they fared over time.

Qiao has seen the same wide range of symptoms. But he said other aspects have also become more apparent over time.

Mental illness, for example, can set in for patients. Not only is there the frustration of not getting better, but many also don’t feel heard by medical professionals.

He said it’s been difficult for him to handle because it’s not what his training is in. Psychiatrist offices are backed up and it’s tough to get people in for an appointment.

Then there are socio-economic factors. Often some of the treatment his clinic provides – such as speech therapy – isn’t covered by insurance “because they’re not recognizing it as appropriate, or it’s too new,” Qiao said.

Others have lost a job and with it their insurance altogether.

“Whatever amount of frustration that we feel as a medical provider, the patients on the other end are probably feeling 10 to 100 times worse,” he said. “It has been a sober reminder of how much we need to listen to our patients and what they're telling us.”

One of Qiao’s patients is 69-year-old Chesapeake resident Bonnie Lovelace.

Her journey with COVID-19 started last May. She and her husband, nicknamed Hub, felt sick and assumed they came down with a cold.

A week went by without improvement, and their son urged them to go to the hospital. They were soon both admitted with extremely low oxygen.

Hub received the antiviral medication remdesivir and got better. Bonnie ended up staying much longer.

Hospital staff were very kind, she said. But tests kept coming back poorly and doctors told her they didn’t have much hope.

She also found comfort in her Christian faith, and in connecting with strangers at the hospital who stopped by her room to chat. But it was hard being away from home.

“It’s not just about the person that is sick,” she said. “It really affects the family.”

Lovelace eventually left the hospital with doctors telling her she’d be back.

It took weeks until she could stand up for a shower. Hair fell out in clumps. Brain fog set in.

“I did crazy things like I couldn't find lipstick. I love lipstick. I could not find my lipstick. Looked everywhere in the house. It was in the refrigerator drawer.”

For a year and a half, Lovelace has battled symptoms. She still has to sleep hooked up to oxygen, and often can’t go long without it during the day.

Qiao’s clinic helped, she said, especially just being able to talk about her experience.

Lovelace said she’s a private person and hasn’t told almost anyone outside her family about the illness.

She said she’s ready to share her story if it will make anyone else feel less alone.

Temple feels similarly. She also has a message for those who know someone with long COVID: