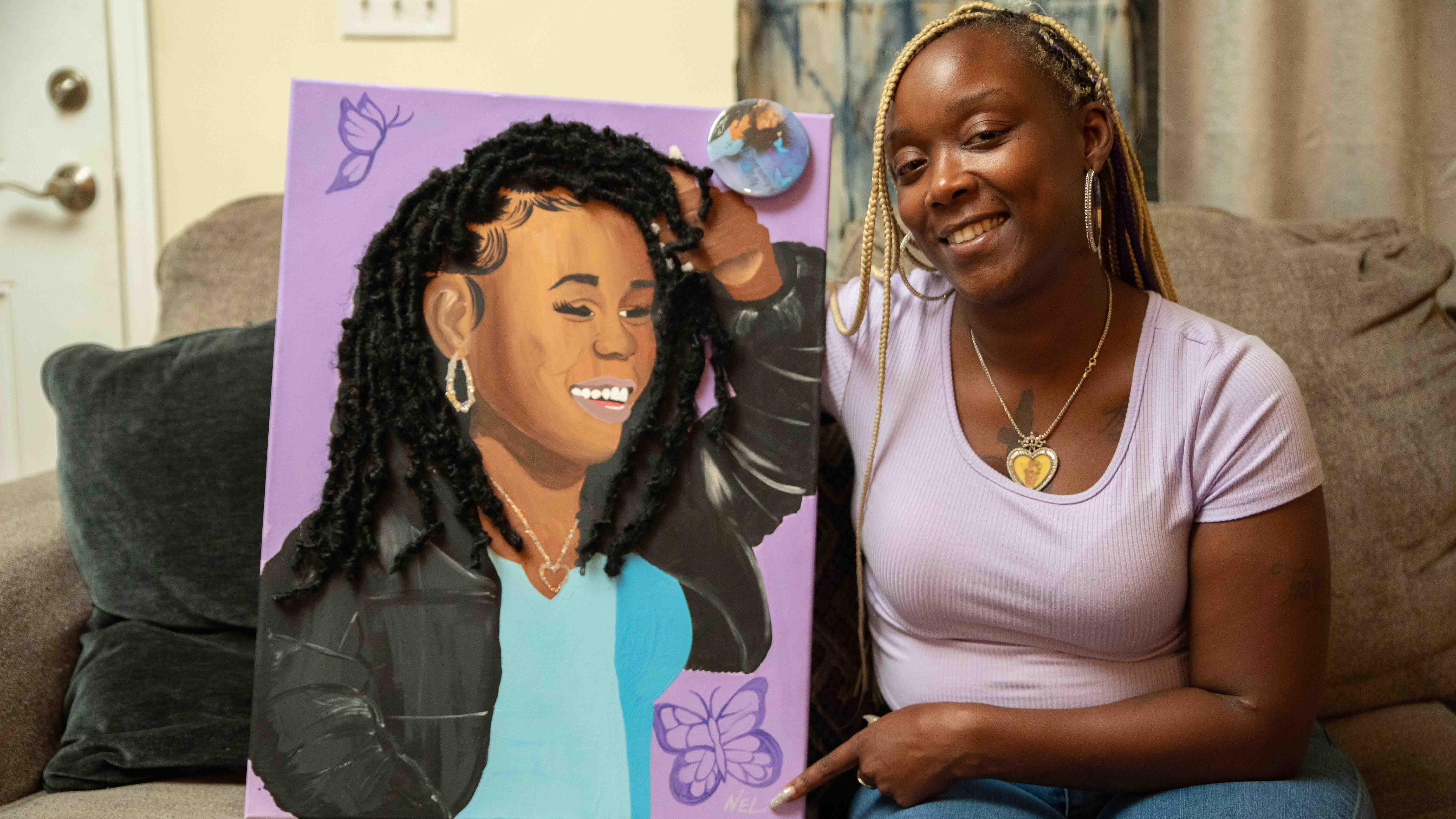 Photo by Crixell Matthews, VPM News. Akeyia Pernell holds a painting of her daughter, Samiyah Yellardy, who was shot and killed in her Richmond apartment in April.

‘Put the guns down’: Richmond mother reflects on the life of her slain daughter

WHRO partner VPM News spent the last four months reporting in Richmond to create the series “Another Way,” a look at how gun violence impacts the city and how residents are trying to minimize it.

Cities in Hampton Roads are not immune to the same kind of widespread gun violence. According to the state Office of the Chief Medical Examiner, Norfolk experienced the second- highest number of deadly shootings in the state in 2020. Only Richmond had more.

Hampton Roads as a whole had the highest rate of gun-related deaths among Virginia regions in the same time period. According to the chief medical examiner’s report, the majority of victims are young Black men.

Visit VPM’s website for more stories out of Richmond.

Samiyah Yellardy, a 17-year-old Richmond student, was fatally shot in her home in April.

VPM News reporter Megan Pauly spoke with her mother, Akeyia Pernell, who reflected on her daughter’s life, death and the hopes they shared for the future.

Below are Pernell’s thoughts, in her own words.

The following has been edited for length and clarity.

She’s my love child. She was born on Valentine’s Day. She loved her family and loved her friends. She spread love, showed love. Her dad loved me, I loved her dad, he loved her.

She was different. Unique, very unique. She was always outstanding, her smile was bright. She was bright. She was not doing what the crowd was doing. Samiyah was outgoing. She had a good sense of humor, down to earth, smart. When people see her in the streets — grownups — she was so well mannered. They’ll be like, “Your daughter is different.”

She always wanted to help, even at an early age. Like, “Let them spend the night, mom — they got to arguing with their mom … .” It’s not too many more out there like that at an early age. Before she leaves you — when she meets you — she’s telling you that she loves you, and she meant that. So, that’s what makes her unique.

She was ready to take up a lash tech class, that’s what she was mainly focused on. She wanted to sell lashes. February 14th, I’m launching her lashes website. There’s a lot of things I want to do in her name, but that’s one major thing.

Another one is working with moms that’ve lost their child, so we can have comfort in each other. I’m already working on getting a nonprofit registered, so I can welcome it into the world. I want us to lean on each other, and work on being happy and healing together. That’s going to be my main goal. Outsiders don’t understand us. This will never go away for us.

She was getting to the age when she was about to become my best friend. She was able to express things. She’d come to me and tell me things. She didn’t lie to me, no disrespect. There ain’t too many things that we disagreed on. We had a bond. Our bond was great.

One of my favorite memories is kind of weird, but it’s my favorite. Me and her was on this couch, crying. She had her first heartbreak, and I was going through a breakup. We crying, we hating men right now. So, both of us crying on the couch, and I’m just talking to her, telling her what to expect, what not to do, the dos and the don’ts. So, her little sister come downstairs: “What y’all crying for?” We look at her and said: “Don’t get no boyfriend!” I thought that was so cute.

Everything was starting to fall into place. We was at a place where everything was fine. We moved back here, so she’d just gotten herself a new job. I was cooking. She was loving it.

Getting the call while in New Orleans

I got the call [about her being shot]. And that was the most … phew. I couldn’t do nothing else but get in the fetal position and just cry. I cried for hours and hours and hours, the whole ride home. I couldn’t get home fast enough. And then my flight got delayed. This is the worst situation I’m living through. I don’t want it to be like this.

Prior to this, I was praying, and I was just thanking God for my peace, thanking God for my sanity, thanking God for my mind. I didn’t know this was going to happen. But the fact that it did … that matters. Because God is keeping me through this. I would be dead or locked up or in a [psychiatric hospital] somewhere, but not sitting here talking to you. I’m not strung out on drugs, I’m not drinking every night or all day or every night. I’m alright.

If I can help, I wanna do that. I’ve been through a lot of things in my life where I can relate to a lot of situations. And I’ve made it through them situations. And this is the worst situation that I think anybody’s ever going to face in their life, if they’ve got kids. I don’t want to go into a dark place. I have been there when I lost [Samiyah’s] dad and lost my mom. But I have my moments. I’m gonna cry for the rest of my life.

‘It’s on to the next mother’

After my child got buried, everybody moved on. I ain’t heard nothing else from nobody but my friends, my people that I know I’ve got. I call the detective every Monday. Like I told the detective on Monday when I called them, it’s like [the police] are saying, “OK, Akeyia, this stuff happens every day. What do you expect?” That’s the energy that I get from them. It’s on to the next mother.

It happened here. I’m still here. I feel like I should have been moved [out of my apartment] ASAP. I shouldn’t have been able to even stay here that same night. Her aunt and her friends cleaned up the crime scene. When I got home the next morning, I had to end up calling the detective to come pick up a bullet fragment that was in the shower. That was messed up. That was devastating. Already, the whole situation was devastating. She was in her house. I’m ready to move out of this city. I hate this city now because of that.

I don’t know how the world’s supposed to work when stuff like this happens, but I think we should be more together and more helpful to each other.

What Samiyah would want people to know