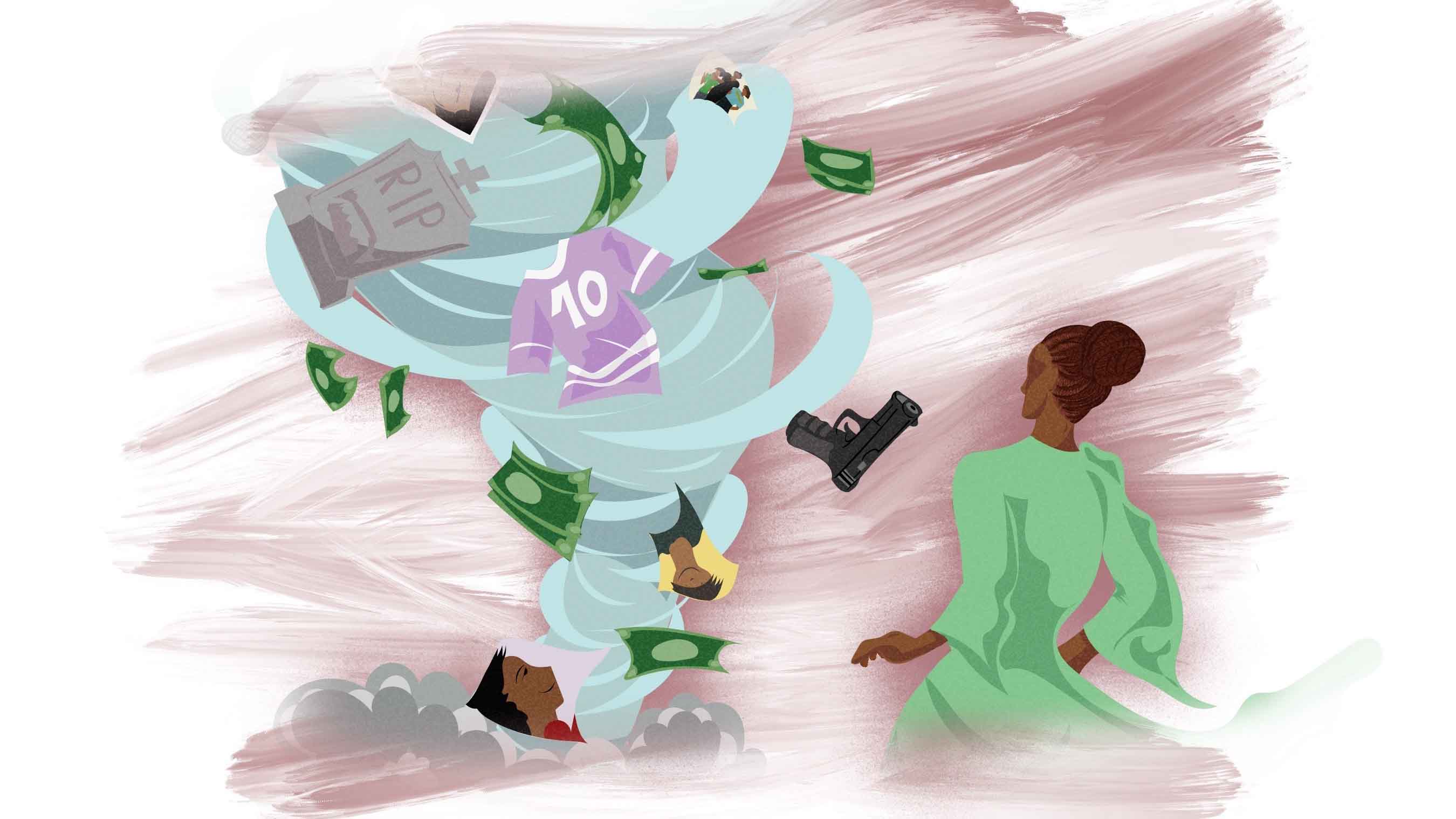 WHRO partner VPM News spent the last four months reporting in Richmond to create the series “Another Way,” a look at how gun violence impacts the city and how residents are trying to minimize it.

Cities in Hampton Roads are not immune to the same kind of widespread gun violence. According to the state Office of the Chief Medical Examiner, Norfolk experienced the second- highest number of deadly shootings in the state in 2020. Only Richmond had more.

Hampton Roads as a whole had the highest rate of gun-related deaths among Virginia regions in the same time period. According to the chief medical examiner’s report, the majority of victims are young Black men.

Visit VPM’s website for more stories out of Richmond.

There’s a corner in Cynthia Bloomfield-Woodley’s apartment that’s illuminated by a Christmas tree and decorated with photos, clothes and hats. It’s a memorial to her two sons, Markie and Jerry.

Both men were in their 20s when they were fatally shot in separate incidents in Richmond during 2006 and 2007.

“I would have never known how many grandkids I could have had,” she said.

Even though they’ve both been gone for more than 15 years, Bloomfield-Woodley said, it feels like her sons were killed yesterday.

The families of gun violence victims have said the experience is transformative, marked by mental anguish, strained relationships and financial burdens that require support long after their loved one’s funeral.

“Justice was served for Markie, even though it hurt me a lot and it tore me apart because the boy that killed my son was supposed to be his best friend,” she said.

The shooter in Jerry’s death was never caught.

That lack of resolution caused Bloomfield-Woodley’s world to close in.

She grew hypervigilant, suspicious, and she avoided crowds and places she used to go. This was a huge shift. Bloomfield-Woodley previously was a social butterfly who worked to raise money for the Children's Miracle Network Hospitals.

Bloomfield-Woodley’s stress eventually turned to anger and then resentment. She took disability leave and spent time in a psychiatric hospital.

“I was reaching out, trying to find a way to make everyone else happy in the community, but when I lost my son, I didn’t want to do nothing for nobody,” she said. “Because I wanted my son back.”

Bloomfield-Woodley said she felt alone — like few people could relate to her experience. Family and friends fell away.

Akeyia Pernell understands that feeling. Her daughter Samiyah Yellardy, a student at George Wythe High School, was fatally shot in April at her home.

“After my child got buried and everybody moved on, I ain’t heard nothing from nobody,” Pernell said.

Her family and friends supported her, but Pernell said she felt like law enforcement and organizations designed to help her left her behind. Yellardy’s case has not been solved.

The Virginia Victims Fund covered some of the funeral expenses, but Pernell said she still paid about $7,000 out of pocket. And she wished she’d moved out of the home where her daughter was shot because it’s become too difficult to live there.

Her family had to clean the doorway where Yellardy died.

“The next morning, I had to end up calling the detective to come pick up a bullet fragment piece that was in the shower,” Pernell said.

Firearm homicides in Virginia increased among teens 18 years old and younger during the pandemic, according to the Virginia medical examiner’s office. Eighty-two percent of the firearm homicide victims are Black males.

There are some resources available in Virginia for victims and their families — largely provided by Victim Services in every local prosecutor's office. The state pays for those programs and other victim-serving organizations with grants.

But because of the recent spike in homicides in some Virginia cities and an uptick in gun-related homicides among teens, many of these programs are overloaded. And federal funding for victim services has decreased significantly during the past several years, partly because it’s paid for by criminal fines, and federal criminal prosecutions are declining. The federal Victims of Crime Act Fund awarded Virginia $85 million in 2018, according to the Department of Criminal Justice Services. In 2021, that fell to $26 million.

“Everybody needs double of what’s happening,” said Karla Crump-Reaves, director of the  Victim Services Unit in Hampton. She’s been there for 36 years. “The crime is still increasing, but the number of people aren’t necessarily increasing that provide the services and the care and the help that’s needed.”

Dina Blythe’s program also suffered from the drop in federal funding. Blythe is the Virginia Homicide Survivor Support Group Coordinator, as well as a friend of Bloomfield-Woodley's. Her program had to stop offering free and low-cost legal services to victims, which she said is tough because the justice system is complicated and frustrating.

The goal of support groups, however, is to help people find peace of mind.

Blythe occasionally reaches out to Bloomfield-Woodley with small gifts, like angel ornaments to hang on the tree that sits in the corner of her Richmond apartment.

Bloomfield-Woodley said she’s still eager to see her son get justice but has started leaning more on the homicide support group for comfort and advice.

"I ain’t gonna say ‘enjoy,’ but I appreciate that group because when you listen to other people, what they’ve been going through, you really pay attention.”

Bloomfield-Woodley said she doesn’t feel as alone as she once did. She’s learning from others that there is a way — in fact, many ways — to heal.