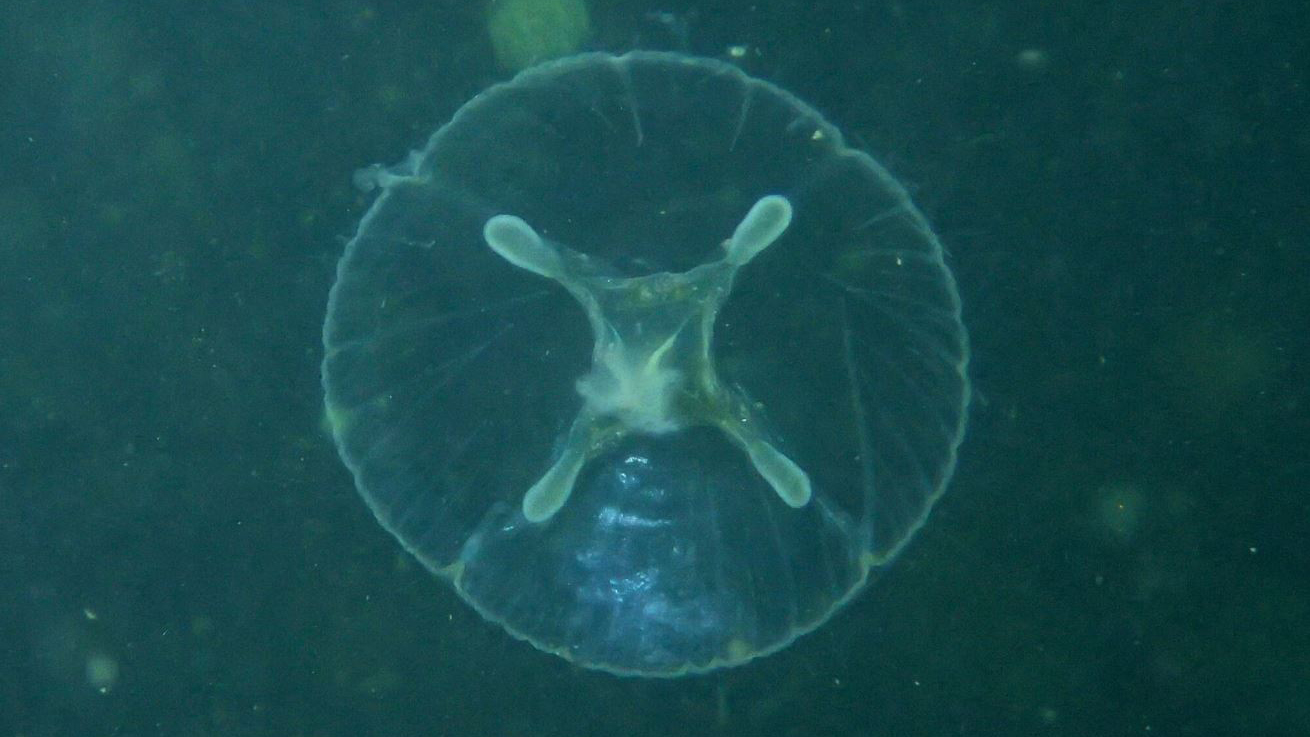 A freshwater jellyfish found in the Crim Dell pond at William & Mary.

Walking by William & Mary’s storied Crim Dell pond, you might not notice anything amiss, or perhaps you’d only catch your own reflection.

But look a little closer in the right light and you can see an underwater ecosystem in motion, said biology professor Jon Allen.

Dime and quarter-sized freshwater jellyfish are blooming in the small pond at the center of campus.

“If you’re careful, they’re easy to spot,” Allen said. “If you just walk by in a rush, you could easily miss them.”

The species is officially named Craspedacusta sowerbii. Allen calls them the “Crim Jells.”

He’s somewhat surprised to see the jellyfish this year.

“Historically they’ve been spottily seen,” Allen said. “They’d be a remarkable thing every once in a while.”

They typically surface once every six or seven years. But this year marks three of the last four where they made an appearance.

So where are they coming from?

In fact, the creatures are always in the pond – and likely most freshwater bodies in Hampton Roads.

But they live deep beneath the surface, clinging to the mud or rocky bottom as microscopic polyps, the earliest stage of the jellyfish life cycle.

It’s not until they emerge to reproduce that passersby might take notice. That’s when they develop into medusas — the hot-air-balloon shapes people typically associate with jellyfish.

The polyps can survive for decades – even without much water, Allen said. William & Mary scientists learned that a few years ago when they drained the Crim Dell pond.

Freshwater jellyfish are one of the most successful invasive species in the world.

Originally from China’s Yangtze River, they’ve spread to every continent except Antarctica and likely to every American state. They can easily hitch a ride on a ship or someone’s muddy boots.

But people may start seeing more of them.

Warm water is what triggers the jellies’ reproductive phase.

And with climate change expected to increase temperatures, some scientists think the freshwater jellyfish are emerging more often.

“They might become more obvious to people,” Allen said.

No one knows, however, how exactly the species impacts the environment around them. Experts have little understanding of “these things that have invaded the whole world.”

“They've got to be competing with the turtles and the fish and the ducks and the other animals that are inhabiting that same body of water,” Allen said.

“What are the consequences for those native species? We don't have a good idea.”

He and his students are working to find out, as well as count how many are out there. They get on kayaks and traverse the pond with nets to capture the jellyfish.

Wherever they’re blooming, including the Crim Dell, the creatures will likely be around only for another couple weeks before the water starts cooling.

Then the adults will die, and their offspring will settle down to the bottom to start the process all over again.

Allen usually researches marine life out in the ocean, but couldn’t resist learning more about the mysterious creatures right across the street.

He said he thinks they’re remarkable and beautiful to watch.

“But I don’t know whether I should be rooting for an invasive species.”