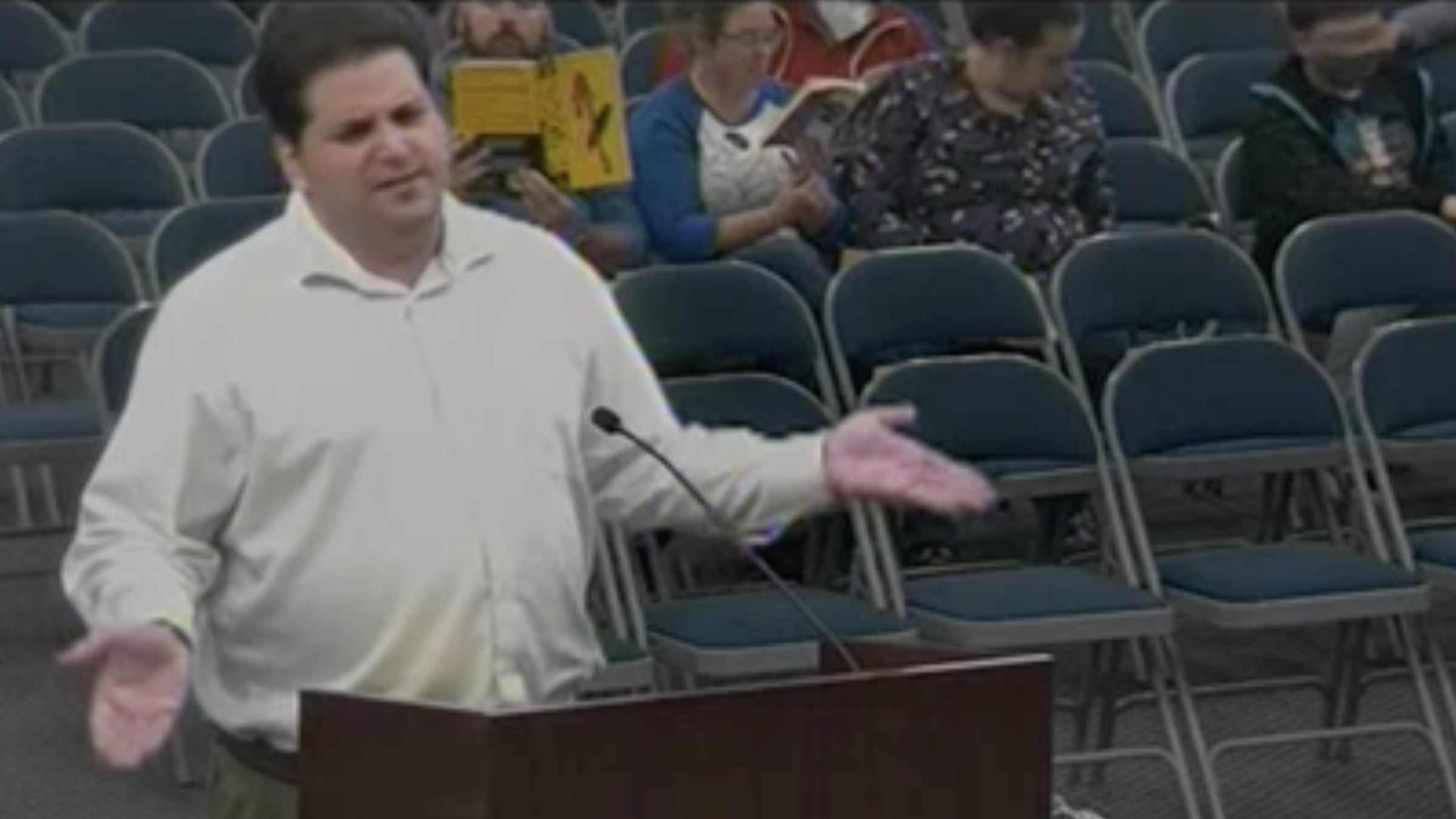 From Chesapeake Public School Board video. Robert Peresich speaks against "disturbing and pornographic" books on school shelves. Behind him, people in the audience are apparently reading challenged books, including the graphic novel "The Watchmen," which has been challenged in Virginia.

Two school systems in Hampton Roads wrestled with book censorship issues in recent years, resulting in some titles taken out of school libraries and a lawsuit in local court.

It’s mostly been focused on books featuring queer characters and books that mention or describe sex.

While that trend continues, local library systems will highlight a variety of controversial books during Banned Books Week.

According to the American Library Association, 1,597 titles were targets for varying levels of censorship in the United States last year. The organization created Banned Books Week 40 years ago.

This year had the highest number of challenged books since the ALA began tracking them.

In Virginia Beach, headquarters of the ALA’s state chapter, challenges to books in schools and stores made national headlines.

The public school system removed "Gender Queer: A Memoir" by Maia Kobabe from its shelves after school board members complained about it. Chesapeake public schools removed the book as well.

An attorney and state delegate, Tim Anderson, filed a suit in Virginia Beach to force local booksellers to restrict sales of that book, as well the fantasy novel “A Court of Mist and Fury,” to adults. The ALA and the Virginia Library Association filed briefs in the suit.

It’s not a coincidence that many of the books under fire are by queer authors or people of color, according to Lisa Varga, executive director of the Virginia Library Association.

“Across the board, across the country in all kinds of different avenues… people are really resisting the idea that other people's stories matter,” she said.

Virginia Beach libraries will host a number of events during Banned Books Week, including a screening of “To Kill a Mockingbird.”

Christine Brantley, a spokesperson for the Virginia Beach Public Library called it “one of the most challenged books of all time.”

In Chesapeake, several residents criticized books on  school shelves at the end of the school year. The books included “Gender Queer” and a graphic novel version of “The Handmaid’s Tale.”

In April, Chesapeake resident Jared Miller said he was “wholeheartedly disgusted” by Kobabe’s memoir. Miller is running for a seat on the school board.

A person filed a formal challenge to “Gender Queer,” and it was removed. Chesapeake School spokesperson Christopher Vail said the person who filed the challenge was the parent of a student.

Amanda Jackson, director of the Chesapeake public library system, said it’s important to “bring awareness to just how silly it is, honestly, to censor materials.”

Giving people the choice to find books and decide to read them is “foundational to me for what our country is built on.”

Newport News Public Schools didn’t see the same kind of calls for censorship as cities on the Southside.

“So they ask, ‘Why was this book challenged?’ We can say it was first challenged in this state at this time for this reason. And it's about opening conversation,” she said.

Virginia Beach and Chesapeake public schools are members of the Hampton Roads Educational Telecommunications Association, which owns the license to WHRO.