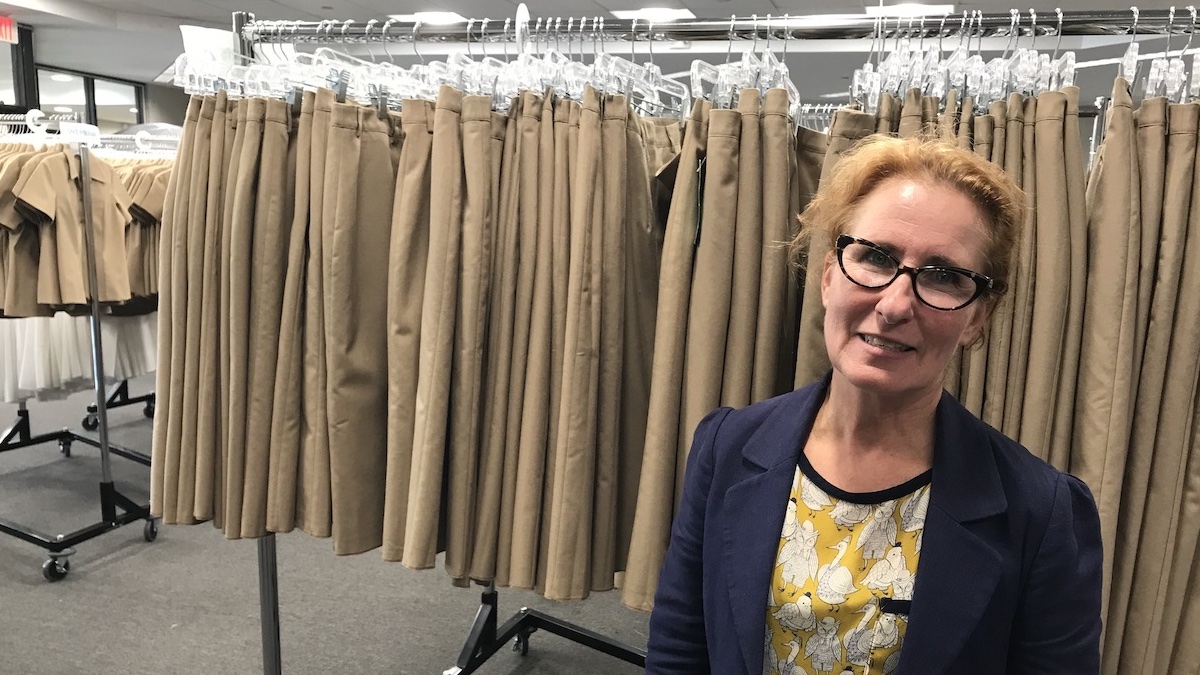 Photo by Paul Bibeau. Brianna Plummer, a clothing designer working for the Navy, stands in front of hundreds of prototypes used to gather data in an attempt to make better-fitting uniforms for women in the Navy.

Navy measures hundreds of sailors, in search of a better-fitting uniform for women

Hundreds of sailors converged on a large central room at the Aviation Institute of Maintenance in Norfolk in the last two weeks. Designers gave them prototype outfits to try on. Then they recorded the sailors’ measurements.

The Navy Exchange Service Command, or NEXCOM, hopes to create better-fitting uniforms for its female personnel, which has historically been a challenge.

NEXCOM is a Virginia Beach-based command that overseas retail sales and other services for the Navy.

Chief Petty Officer Patricia Sanders said women in the Navy find it difficult to find uniforms that fit. Friends of hers often have to spend extra money for tailoring, she said. Fit is crucial for their jobs in the service.

“We go up and down ladders, travel through scuttles,” she said. “So we need these uniforms to fit better, to give us that flexibility.”

According to a recent Navy press release, ​​different types of uniforms for women don’t have standardized sizing. The current styles come from a 40-year-old design.

The Navy made modifications over the years, but now officials want a comprehensive update. For that, they need data.

Brianna Plummer, who supervises a design team at the Navy Clothing and Textile Research Facility in Massachusetts, said the Navy is trying to get as many sailors’ measurements as it can “so we can understand the bodies that we need to fit.”

The team brought 1,800 prototype garments into the school for the sailors to wear – with the size hidden.

“We don't want that to sway the perception of what they're being put into,” Plummer said. “We really are trying to get an assessment of how it is fitting the body, and if the proportions are proper.”

Part of the challenge, she added, is women’s bodies are constantly changing, in both shape and size. They may gain or lose weight or have children during their careers.

Plummer said the Navy wants to develop standard sizes for all uniform items.

Sanders said that would make outfitting herself for duty much easier, allowing her to order clothes online or have someone pick up an item for her.

Designers expect to gather measurements from 500 women by the end of the month.

They don’t have a timeline for the finished product.