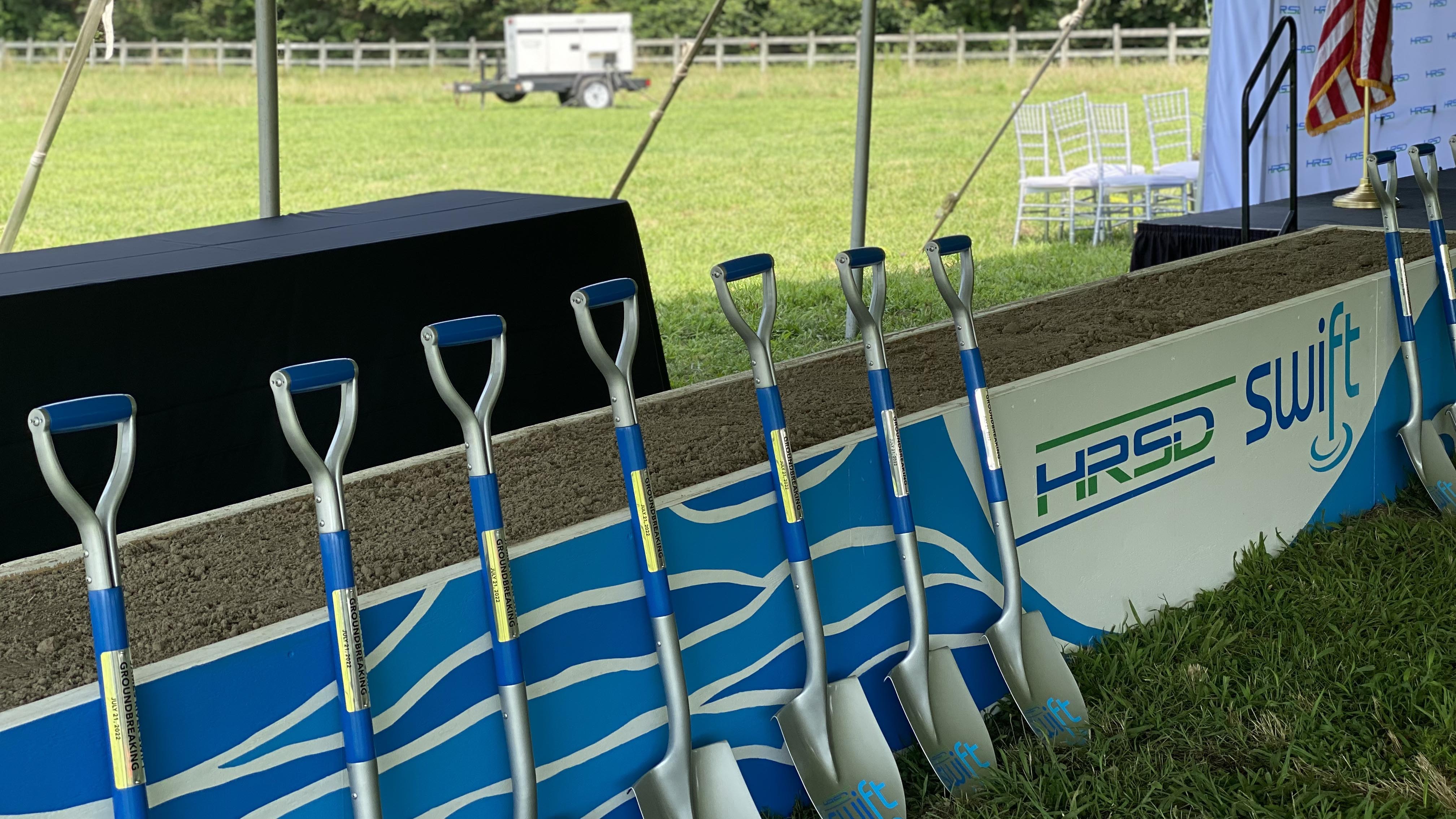 Photo by Katherine Hafner. Shovels lined up for the groundbreaking of the Hampton Roads Sanitation District’s SWIFT expansion to the James River Treatment Plant in Newport News. Taken Thursday, July 21, 2022.

The Hampton Roads Sanitation District already pumps one million gallons of treated sewage each day back into the aquifer that provides our drinking water.

With a new expansion, they hope to increase that amount – sixteenfold.

The district broke ground Thursday on the first full-scale facility for its Sustainable Water Initiative for Tomorrow, known as SWIFT.

Officials plan to upgrade and expand the existing James River Treatment Plant in Newport News, including installing pipeline systems and a series of wells to monitor the treated water’s quality as it enters the Potomac aquifer.

“This facility will be one of the most advanced water treatment facilities in the Commonwealth,” HRSD general manager Jay Bernas said at the groundbreaking ceremony.

When construction’s completed in 2026, the plant should pump about 16 million gallons of the former wastewater into the aquifer each day, said Lauren Zuravnsky, chief of design and construction for SWIFT.

The initiative launched back in 2016 with a research center at the Nansemond plant in Suffolk.

The idea is to help replenish the Potomac aquifer, an underground body of water that’s bigger than the greatest Great Lake.

Virginians and others have been removing drinking water from it for more than a century, Zuravnsky said. But the pace at which water gets added back in is glacial compared to human withdrawal.

“It doesn’t naturally recharge,” she said. “Really one of the important investments here is being able to create a sustainable water cycle.”

As part of getting approval for the James River expansion, the district also agreed with Newport News to build public walking trails along the shoreline and make improvements to the surrounding Riverview Farm Park.

Eventually HRSD wants to add SWIFT capabilities to all of its local treatment plants.

There are other environmental benefits that Hampton Roads officials hope to recognize, too.

Converting the wastewater diverts it from being released into local waterways, for instance. The district has to meet stringent standards to reduce nutrients in the wastewater, but it can still contribute to pollution.

The aquifer replenishment could also help with the region’s subsidence problem. That’s the name for the sinking of our land which, combined with rising sea levels, makes Hampton Roads particularly vulnerable to flooding.

Zuravnsky said about half of the area’s land subsidence is due to withdrawal from the aquifer. The district already has some evidence of that effect rebounding after the SWIFT pilot project, she said.

The James River project will cost half a billion dollars. Only half of that is for SWIFT.

The rest is for another revamp – this one to change how the district removes nitrogen from wastewater.

Charles Bott, director of water technology and research, said HRSD will be one of the first in the world to implement a process called Annamox at a large scale.

Officials had been refining the process at their York River Treatment Plant.

Bott said he expects using the new denitrification method to save HRSD about $1 million per year and reduce its carbon footprint.