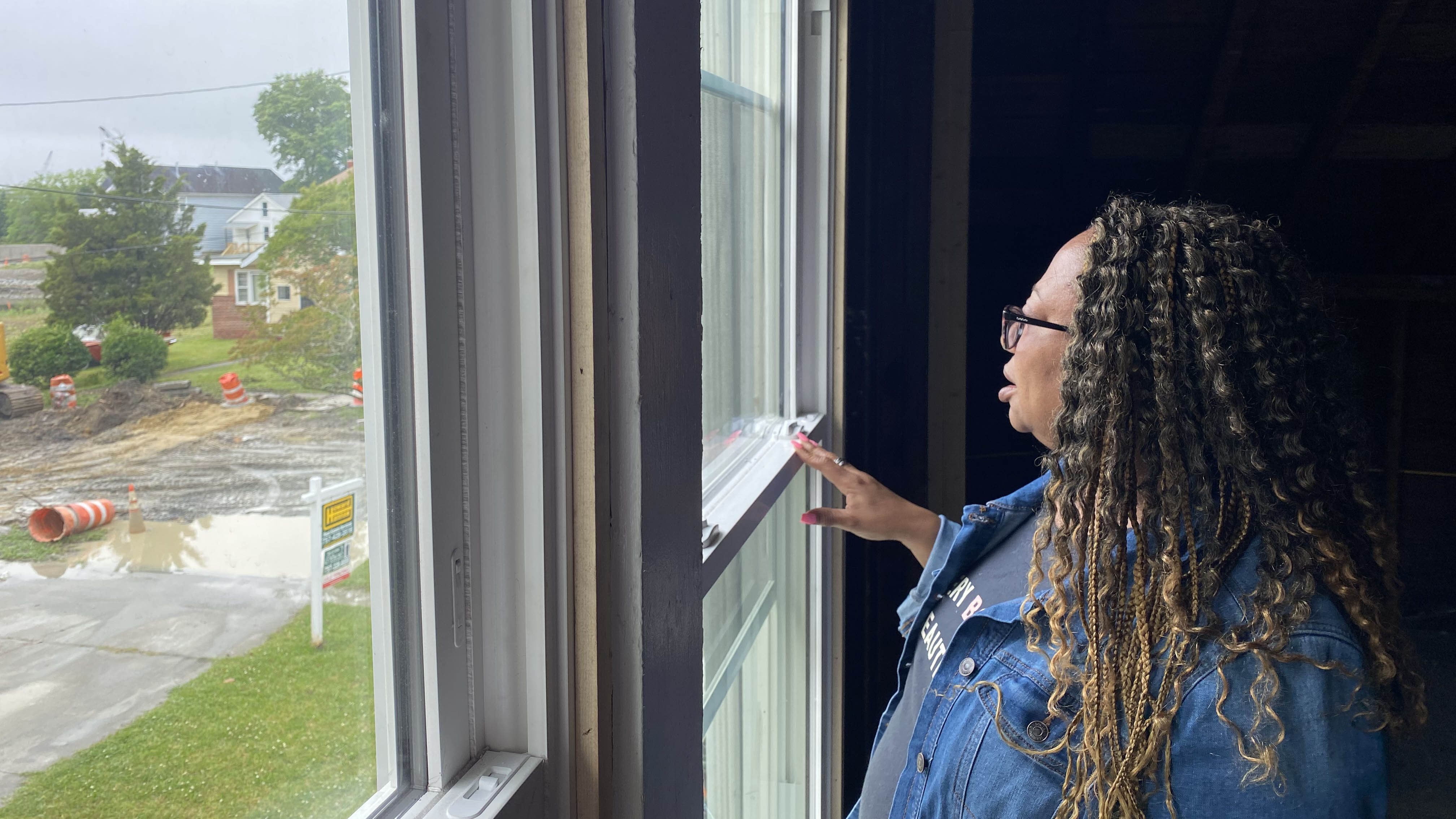 Photo by Katherine Hafner. Karen Speights looks out the window from her Chesterfield Heights home, which is undergoing renovations to test flood resilience strategies.

Sure, there’d be an occasional storm that brought standing water into the yard — but never in the house, said Speights, now 64.

That started to change more than a decade ago. Speights had moved out of state for work but came back to her childhood home to care for her aging mother.

One night, a nor’easter blew through. Speights and her mother had taken their usual precautions – putting the trash bins in the garage, moving the car to higher ground – and were eating crab legs.

Then they noticed splashing sounds. Water had entered the home and was quickly rising. Speights felt what seemed like a bite and realized it was a shock from an electrical current after the water reached the power outlets.

“It was moving like the waves on the beach,” she said. “The rugs and whatever was on the floor were floating.”

They raced upstairs and spent the night praying and waiting for the storm to stop.

The next morning with the water gone, “it was like nothing had happened,” she said. But the flood caused a lot of damage.

It wouldn’t be the last time. Speights’ home would flood several more times in the following years. Because they had flood insurance, workers would come in and replace major sections.

At first it was nice to at least modernize a bit, Speights said. But insurance could only do so much.

“It doesn’t give you advice,” she said. “It doesn’t tell you how to mitigate for the next time.”

A local organization hopes to do just that, and is using Speights’ home in Chesterfield Heights as their testing ground.

“There's a lot of policy and a lot of discussion out there about flooding,” said Paige Pollard, one of the group’s leaders. “We tend to go to the extremes of either elevation or demolition or retreat or relying on infrastructure improvements.

“And I think as we move into a phase where people are going to need to make individual choices on their individual properties, the more information we can give them to inform those choices, the more comfortable folks will be making them.”

Around 2009, the Norfolk-based Commonwealth Preservation Group started noticing a trend.

The firm helps clients with things like historic rehabilitation tax credits and retrofit design. It specializes in historic structures, meaning those from before the 1970s, when builders started shifting away from traditional materials such as brick and real wood.

Pollard, one of the firm’s partners, said they got a steady uptick in inquiries from local home and business owners having trouble with damage from flooding and moisture inundation.

Owners needed guidance and technical assistance.The firm began looking for accepted standards in the field, but couldn’t find much.

Most work focused on the extremes, including demolishing or raising a building.

“There really wasn’t a lot of guidance and material to help with treatment of historic buildings that didn’t require such a major intervention,” she said.

The issue stayed in their minds for many years, until a local grant opportunity came up. Norfolk nonprofit RISE Resilience Innovations, which funds small businesses doing resilience work, gave the new venture a quarter-million dollars in 2019.

They’re now working to gather empirical data to prove their anecdotal experiences on how to best adapt local buildings for the reality of increased flooding events and sea level rise.

One element of that is a new lab in downtown Suffolk.

The centerpiece is a large, rectangular white tub the group uses to experiment with different building substances.

“Our intention here is to test historical materials for their flood resiliency, their ability to be sustainably reused in a building,” Shackelford said.

The wood samples are currently affixed to the bottom of the tub. Wires are attached and send around-the-clock data to computers.

Shackelford switches on a faucet, to show how they simulate flooding.

They account for other factors that affect a material’s recovery. A period of strong humidity often follows a hurricane, for example, he said.

“This chamber gives us the ability to do all of that.”

Eventually, Shackelford said, the goal is to get the data-based guidance accepted by the federal government.

For those with federal flood insurance, the Federal Emergency Management Agency currently only uses certain approved materials to repair damage, he said.

They want to prove it’s more efficient – and economical – to leave many historic materials in place.

The other, real-world part of the team’s work is happening in Speights’ home in Chesterfield Heights.

They are several months into construction, including a redesigned layout to accommodate Speights’ needs. Her elderly mother’s bedroom will move downstairs, for example.

Other strategies include moving electrical work and ductwork up high so it doesn’t need to be replaced after a flood, and installing a chair rail on top of waterproof drywall or rock material.

Pollard said her business doesn’t try to use blanket strategies on every home. Nor do they claim to make a structure flood-proof.

Rather, the goal is to tailor resilience work to an owner’s specific wants and needs.

Speights, for example, hopes to live in the home for the rest of her and her mother’s lives. She knows the structure may not survive beyond that.

“A lot of the well-intended policies put in place by federal, state and local governments … don’t take into account what is the property owner’s goal,” Pollard said.

“Particularly as we move into an era where FEMA isn’t the only one footing the bill for a lot of this work – a lot of times property owners are paying for remediation work out of pocket – their needs and their voice become much more important.”

It’s tough for homeowners to know what they should or even could do about the unpredictable and seemingly intractable issue, Pollard said. That causes a lot of anxiety for people who’ve made the decision to live in the area.

“Really what we do is help folks come up with a decision-making process to really manage that risk and try and make exposure to flooding … the most predictable it can be.”

Meanwhile, officials with FEMA and the National Park Service have started their own studies into the issue at a broader level, Pollard said.

Planners, preservationists and others from around the country gathered to discuss protecting cultural history in the face of climate change.

Pollard told the crowd that one project that prompted her firm to first dive into the topic is located right across from the Hague. The developer of the Roebuck apartment building had retrofitted an old storage warehouse on the water and needed help adhering to certain federal requirements.

“While none of us had the answers, we sort of started on a journey together,” she said.

Speights loved her childhood in Chesterfield Heights. The community had lots of kids who would play together on the street and everyone knew their neighbors, she said.

After moving out of the area for work, though, she never intended to end up back there — much less in the same home.

“I never thought I would be here this long,” said Speights, who’s living in a friend’s home while hers is undergoing renovation. “I just started liking the familiarity of it all.”

And now, she’s put all her financial and emotional investments in preparing the home for flooding. It’ll look different after the work’s done and she’s excited for the new layout.