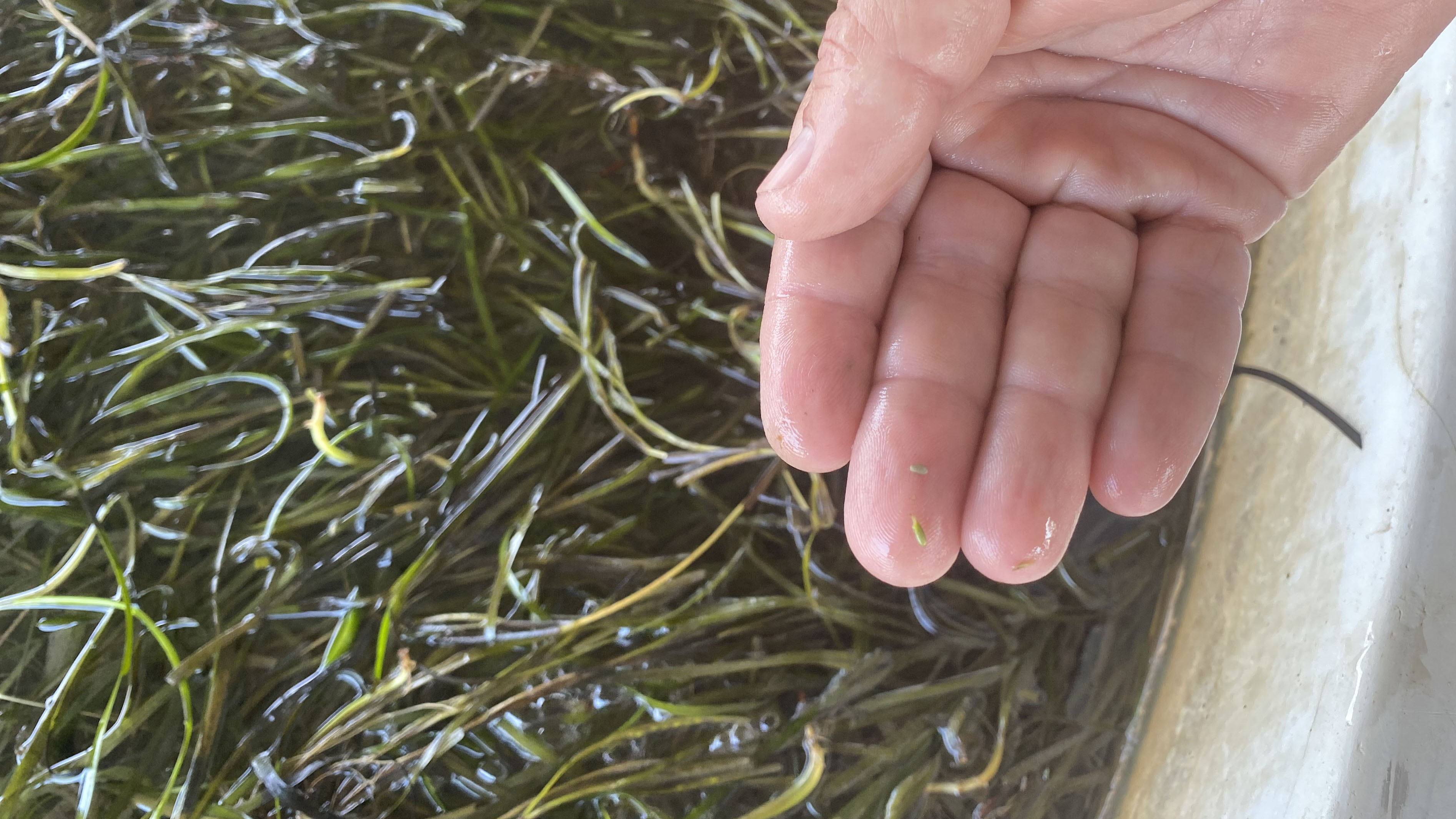 Photo by Katherine Hafner. Bo Lusk, coastal scientist with The Nature Conservancy, holds eelgrass seeds over a tank full of grass collected from the seaside bays of the Eastern Shore. Pictured Wednesday, June 1, 2022.

Each spring, dozens of volunteers gather along the seaside Eastern Shore equipped with snorkels and wetsuits.

The local species of seagrass, which provides its own crucial ecosystem for critters like bay scallops and crabs, was once thought lost forever. But dogged efforts by conservationists in recent decades have brought it back in full force.

An underwater eelgrass meadow near Virginia’s Barrier Islands now spans about 10,000 acres. About 600 of those were planted by the scientists. The rest bloomed on their own from there.

The annual seed collection effort is part of the restoration process.

It’s a sought-after assignment, and The Nature Conservancy, which leads the effort, gets more volunteer applicants than they can use.

Collection has to happen in a narrow window of time when the seeds are ready inside flowering eelgrass shoots but haven’t yet been released, said Bo Lusk, coastal scientist with the Conservancy and an Eastern Shore native.

His family’s been on the Shore for generations as farmers and watermen. He recalls eelgrass on the bay side of the region, but none on the Atlantic coast while he was growing up.

His grandmother’s generation was the last to see the plant before the 21st century.

“It all disappeared when she was young and that eelgrass hadn't come back since then,” Lusk said.

The population was decimated almost a century ago by a slime mold-caused wasting disease. A major hurricane in 1933 wiped out what was left, and with it, the thriving bay scallop industry.

The grass also supported crabs, fishes and foraging waterfowl, Lusk said. Plus, it held sediment in place, buffered acidity in the water and absorbed wave energy that erodes shoreline.

“These are just some of the things we lost when we lost that grass,” he said.

In the late ’90s, an eelgrass miracle happened.

Scientists noticed a tiny patch of it had sprouted off the Shore. A seed or two probably floated down from beyond Chincoteague and happened to land in a spot with suitable growth conditions, Lusk said.

Experts eagerly worked to restore the grasses from there.

“It could’ve happened on its own, but we’re speeding it along,” Lusk said.

Over the past couple weeks, the Conservancy and volunteers set out daily for the seed collection.

It involves boating out to the hidden meadow, hopping in the shallow water and collecting mesh bags full of the grasses.

Back on shore, the grass then goes into several tanks full of constantly pumped water. The seeds will soon pop out of their shoots – like peas in a pod – and sink down to the bottom.

In the meantime Lusk and others jump into the tanks periodically and stir everything around, “I Love Lucy”-style, to prevent low-oxygen dead zones.

Later in the fall, the scientists will plant the seeds by tossing them overboard in spots where they hope to jumpstart growth.

Meanwhile, officials with The Nature Conservancy, University of Virginia and William & Mary’s Virginia Institute of Marine Science are also working to use the major seagrass restoration as the basis for the first blue carbon credit program of its kind.

The underwater fields store enormous amounts of carbon dioxide in the seabed, preventing it from being released into the atmosphere where it contributes to global warming.

In the new program, which is still under development, people could buy carbon credits linked to the seagrass to offset their own emissions. The money would then fund more research and management.

Lusk said it’s rewarding to be part of eelgrass restoration a few generations after his grandmother saw some of the last of it.

He wants “to help continue to bring that eelgrass back here where it disappeared when my grandmother was a little girl, so that my little girls who are growing up here on the Eastern Shore get to know all about eelgrass.”