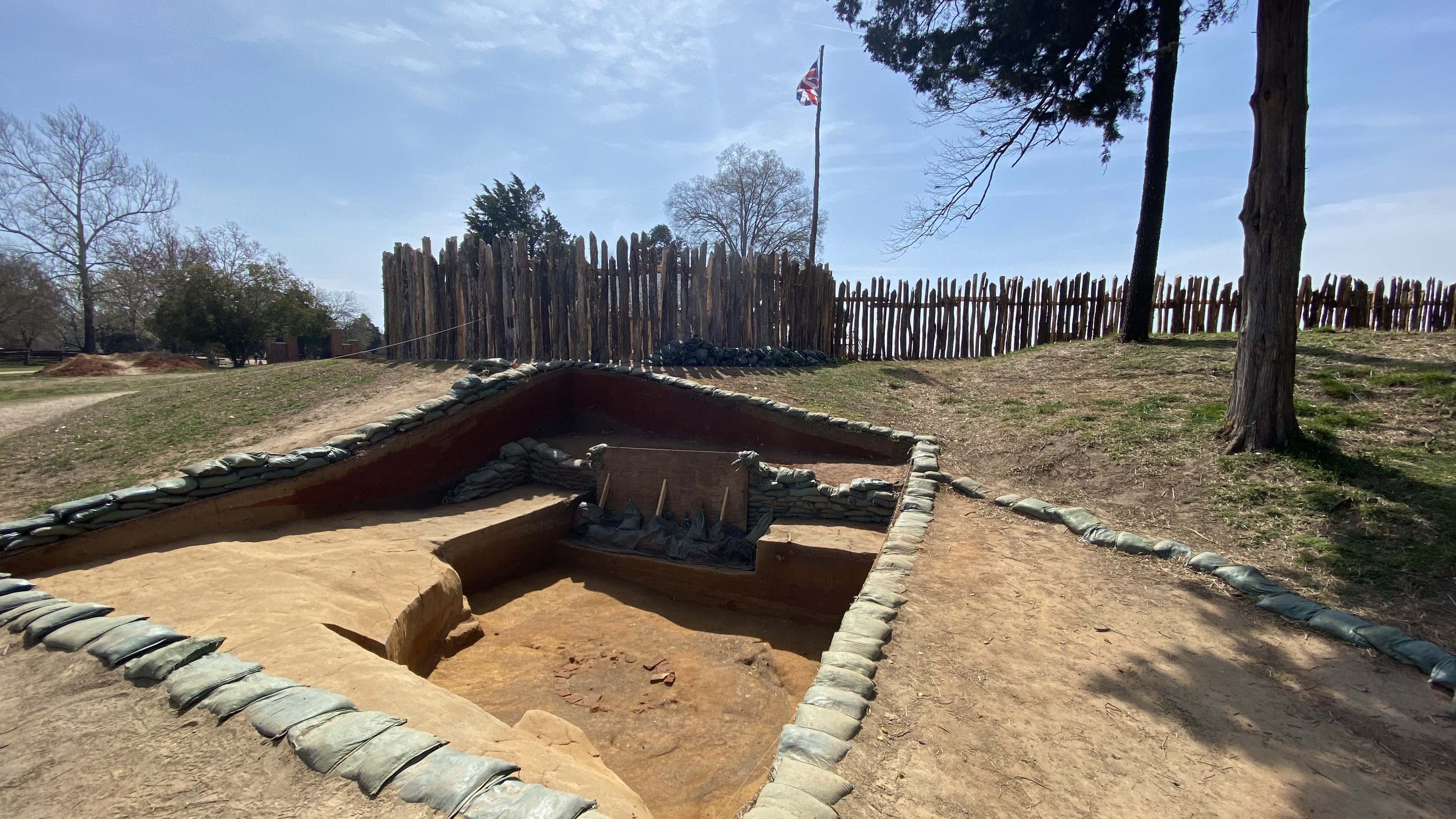 Photo by Katherine Hafner. A fence at the intersection of Elm Avenue and Victory Boulevard in Portsmouth marks one boundary of the 33-acre Peck Iron and Metal Superfund site.

For years, there’s been a rule passed down in the neighborhoods along Portsmouth’s Paradise Creek: Don’t eat the fish.

Lead, asbestos and even radioactive material remain on a Superfund site that lines the waterway.

The 33-acre Peck Iron and Metal property is immediately southwest of the intersection of Elm Avenue and Victory Boulevard – just west of the Jordan Bridge and kitty-corner to the Wheelabrator trash-to-energy plant.

It was deemed a priority by the Environmental Protection Agency in 2009. Thirteen years later, the agency has proposed a $17 million cleanup plan that would remediate contamination there within the next few years.

Local officials have long recognized the toxic legacy of the industrial and military corridor. Environmental groups do ongoing work to clean up toxins in the creek, which feeds into the Elizabeth River.

Four sites within a few miles are deemed Superfund sites by the federal government – meaning they have hazardous material that needs intervention. That includes Peck and the Norfolk Naval Shipyard.

“The fact it’s taken long, it’s kind of out of our hands,” said Bracey Parr, civic league president of the historic Cradock community located across the creek from the Peck site.

“We’re surrounded on all sides with Superfund sites. … (Peck) was just sort of the final piece. It was the least low hanging fruit and I just think that’s why it was the last one.”

The business took in and processed scrap metals from a range of sources including electric power and rail companies. Nearby Navy installations were also a big customer.

The land carries the legacy of all that material.

Lead, asbestos, hexavalent chromium, mercury and more have all been found on the site in recent years, according to the EPA. So have PCBs – a toxic chemical previously used in all sorts of industrial products – and a radioactive compound called radium-226.

The latter was used to manufacture luminescent paints and is found in older items like watches and clocks with glow-in-the-dark dials, and deck and personnel markers used by the Navy, said Debra Rossi, one of the EPA’s remedial project managers for the Peck site.

Following the Peck facility’s closing, local officials tried to get owner David Peck to voluntarily clean up the land, according to Virginian-Pilot reporting in the early 2000s.

Tests in the mid-2000s found unacceptable levels of PCBs. But discussions broke down, as did other state and federal program opportunities.

In 2009, the Peck site was added to the Superfund National Priorities List, which helps the EPA determine what requires further investigation.

That investigation happened in the ensuing years, wrapping up with a final feasibility study last year.

The EPA recently released a range of options for how to address the site. On one end is doing nothing, while the most extreme – and expensive – option is excavating everything and disposing of it offsite.

The EPA’s preference is somewhere in the middle – getting rid of the most highly contaminated material, while capping the rest on site.

That could mean through a paved cover, something covered in vegetation or even one with solar panels – that decision would come later, Rossi said. The government ideally likes to use a cover that would have secondary value as ecological habitat, she said.

A small-scale cleanup already happened earlier this year. Some EPA officials were worried that military surplus collectors would trespass and steal some items that had been unearthed but contained radioactive traces, Rossi said.

Those items were sent to a disposal site in Utah. But there’s still more radium-226 in the land.

Earlier this month, the EPA held a session in Cradock to answer questions from residents about the proposed cleanup.

The main concern from locals: their health.

Portsmouth has some of the highest cancer rates in the state. There must be a connection to the toxic chemicals nearby, they say.

Joyce White-Tasby has been paying attention to the Peck site, among other local spots, for years in her environmental justice work.

Now in her 70s, she grew up in Brighton, down the road from the site. Back then, she said, her brother would come home from working at a local factory covered in soot.

Their neighbor would drink milk to alleviate what he said was stomach pain from all the chemicals.

In her role as chief apostle of The Young People’s Guild of Performing Arts in Portsmouth, she’s worked with lots of students.

She said she started noticing that the same people who complained of problems like asthma also lived in the same neighborhoods along Paradise Creek.

“We began to be concerned about the impact of these illnesses and the side effects and ill effects that so many of the various neighborhoods were suffering with,” White-Tasby said. “I know the effects of some of the people who've died and went home to be with the Lord and did not understand why they had these different side effects and illnesses from living in the area that they did. And they were not told or educated.”

She thinks the EPA should do a better job educating neighborhoods “of what they’re up against.” And then help provide a way for them to counteract it.

Rossi said the agency would gladly host free lead exposure blood testing at local events if community members express interest. Officials have also tapped representatives from the Agency for Toxic Substances and Disease Registry to respond to community members who called in with concerns.

Residents are also worried about flash flooding washing toxins from the site into the community. White-Tasby said the EPA needs to do more testing near people’s homes to see if that’s happening.

Rossi said the agency determined residential yard testing was not necessary because prior samples along the creek found that concentrations of certain concerning substances were not as high as on the Peck site.

For the past year, a Hampton University journalism class has been looking into the Peck property.

“We wanted to work on some kind of site that was very close to a Black community and really focus on how the effects of this Superfund site has affected the pollution, the water and everything within this Black community,” said Daelin Brown, who recently graduated.

Brown spent months knocking on residents’ doors and calling officials. She led the student team for the story, which they now plan to publish this summer in Inside Climate News, a nonprofit outlet.

After a while the students’ focus shifted from the initial idea of environmental justice, Brown said.

“We realized that even though Cradock was a predominantly Black community, all the residents were being affected by this.”

Their investigation will instead center on what’s taken the EPA more than a decade to move forward, and how the government should communicate better with residents.

“Many residents just actually had no knowledge on the Superfund site or anything of the toxins in the water,” Brown said.

She even spoke with Peck himself, who’d inherited the business from his family.

He “really does feel bad for how this ended, and he didn't necessarily know everything that was going to happen,” she said. “He believes that he was given these PCBs, that it should not all fall on him because somebody had to give it to him. … I think that was just a very interesting point of how somebody can own this entire site and not even plan to have it do as much damage as it can.”

Peck did not respond to an emailed request for comment from WHRO.

The nonprofit Elizabeth River Project has worked for decades to restore Paradise Creek. The Peck site was one piece of that.

“We tried to encourage Mr. Peck to do the right thing and start a cleanup,” said Marjorie Mayfield Jackson, executive director of the Elizabeth River Project. “I think he never felt like he had the resources to get going. And so it’s taken all this time.”

In the mid-2000s, the nonprofit helped put a conservation easement on a sliver of the property along the creek which is now restored wetlands. The easement means it has to remain wetlands forever.

The EPA will likely dig up the wetlands as part of their cleanup, but must replace them.

Jackson said she doesn’t think the government’s done a great job of communicating the positive news about the cleanup.

“Understandably that creates a kind of a feeling of distrust and hard feelings,” she said. But “it’s getting cleaned up. So that’s what’s really great.”

The area was a dumping ground through two World Wars, Jackson added. “I think it’s the last major thing that needs to happen for that creek to return to health.”

The EPA is still seeking public comments for its cleanup proposal. You can submit your comments through May 27 by emailing This email address is being protected from spambots. You need JavaScript enabled to view it. or leaving a voicemail at 215-814-2010.