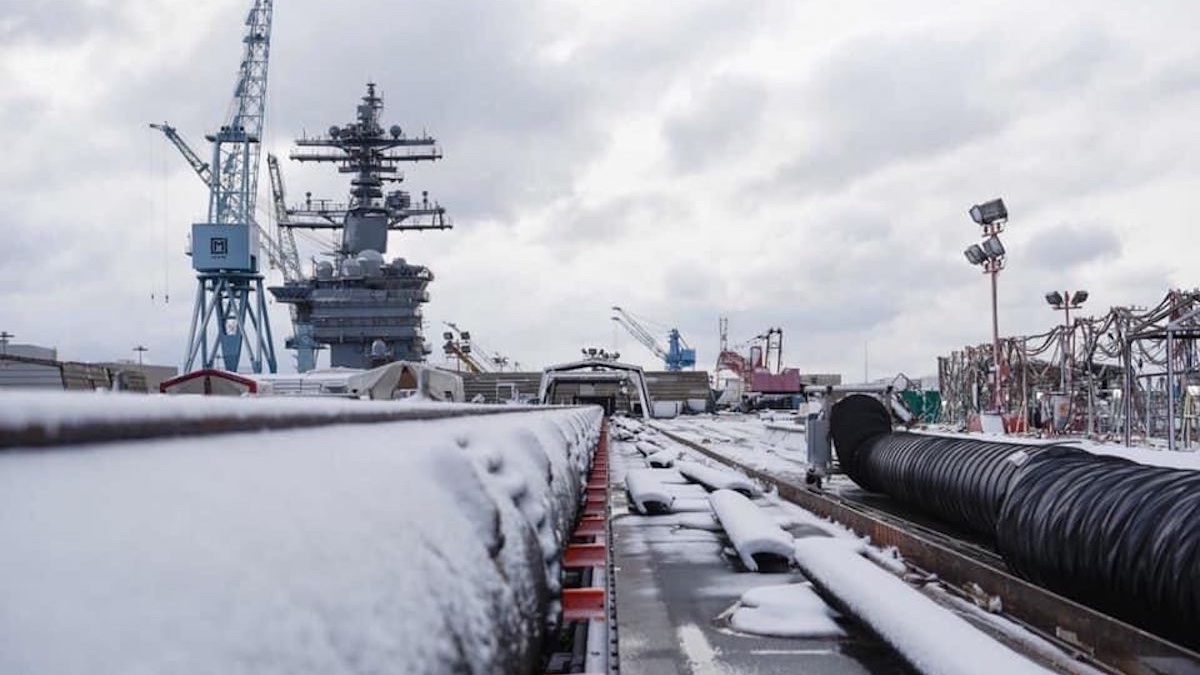 Photo by U.S.S. George Washington Facebook page. The carrier in January 2021, after the pandemic's first year.

“I won’t get help then”: Sailors say pressures and conditions could have led to suicides on the Newport News-based George Washington

Note: This article contains references to suicide and self-harm.

Gabrielle Simpson thought of harming or killing herself “out of spite.”

She served on the U.S.S. George Washington from 2017 to 2019 during what she calls the worst period of her life. The ship was starting its refueling and overhaul at Newport News Shipbuilding – an extensive maintenance period that requires sailors to bunk on or nearby the carrier.

Simpson said it was a filthy, unventilated workspace, and she suffered verbal abuse from her supervisors.

She wanted to talk to someone, like a counselor. But she was both subtly and  explicitly discouraged from doing so.

“It's kind of hard to recollect some of the things that happened, because the brain kind of shuts down when you go through something so traumatic,” she said. “[It] blocks out that part of your life.”

She does know she thought about self-harm just to prove she was not well.

“How can I make somebody notice?” she said. “How is somebody going to listen to me and see, like, just how downhill this has really gone?”

Simpson was not alone.

In the last year, 10 sailors died aboard the Washington. At least five of those deaths are thought to be suicides.

Those deaths stand out in the Navy, whose last recorded suicide rate – in 2020 – was the lowest of all the military branches.

Several current and former sailors from the Washington told WHRO overhauls -- which is why the ship is why the ship has spent almost 5 years docked at Newport News -- are challenging.

Sailors sleep in a construction site, complete tasks unrelated to their military training and spend their small amount of free time by themselves with nowhere to go.

And that was all before the pandemic, which limited how much time sailors could spend off the ship and had a marked impact on many peoples’ mental health.

“Members of one ship’s crew stated that they lost one person to suicide and a dozen other personnel experienced mental health issues over a period of seven months,” the report stated. The report didn’t specify which ship crews provided responses.

She said the Newport News shipyard can feel isolated, especially with COVID-19 precautions.

“(There) really isn't the ability to sort of walk off the ship, walk off of the shipyard and be somewhere,” she told reporters.

In recent years several suicides have occurred during overhauls of Navy ships. Three sailors from the USS George H.W. Bush died by suicide in 2019 during an overhaul at Norfolk Naval Shipyard in Portsmouth.

Navy personnel also died by suicide on two submarines docked in Hawaii's Pearl Harbor Naval Shipyard during maintenance – the USS Columbia in 2019 and the USS Charlotte in 2021.

“You’re living in a construction zone”

Reilly McCourt worked in security onboard the George Washington from 2016 to 2019. He was there for the first two years of the overhaul.

He called the experience “depressing.”

“You're living in a construction zone. The air is constantly full of dust and debris by the heavy equipment. You have to wear your ear protection at all times because of the loud noises,” McCourt said.  “The boat kind of tends to feel like a ball and chain more than a place of work.”

Simpson said sometimes power on the ship would cut off, making the ship intolerable.

And in those conditions, sailors were often asked to do work without a clear goal. McCourt said sailors had to clean areas over and over to pad out reports and make the crew seem busier than they were.

While the work went on, the sailors had a difficult time in the barracks off the ship, according to McCourt, who called them “super outdated and cockroach-infested – just nasty places.”

Simpson found the barracks she was assigned to live in unsafe and decided to pay for an apartment with her own money.

“[I] was paying rent on an apartment out of pocket with nothing and basically having no money left just so I could live somewhere where it was clean with clean water and safe,” she said.

Simpson said the verbal abuse she got from her supervisors made it clear there was no excuse for missing work – even if she was experiencing emotional turmoil.

She eventually found support with the help of a friend. But when she started receiving treatment, people began talking about her behind her back, she said.

People blamed her for taking time out of her schedule to get care. If she had to make an appointment, the people around her made it clear it was an inconvenience.

“And obviously that makes it hard because I'm like, ‘Okay, well then I just – I won't get help then,’” she said.

McCort said the same –  he knew many people who got mental health care, just to come back to the ship to be “ridiculed and blackballed.”

Some sailors who spoke to WHRO didn’t want to be named, for fear of retaliation. Those sailors said the pressure to suck it up and push through their issues could be more subtle. Some worried getting mental health care might jeopardize their security clearances and their current positions, they said.

Statistics compiled by the Defense Department show 60 to 70 percent of military personnel who have mental health problems don’t get care.

A recent change in the law might help military personnel who want to get treatment, but are afraid of repercussions.

In 2018, Brandon Caserta died by suicide at Norfolk Naval Station after relentless bullying from a senior sailor.

His parents, Teri and Patrick Caserta, pushed to have the Brandon Act passed in late 2021. It’s a law that allows service members to seek mental health care without notifying their supervisors.

Patrick Caserta, Brandon’s father, is not sure the law will really be put into use.

“We were told that it's being implemented right now,” he said. “It should be done soon or something, but we don't believe they're doing anything.”

Patrick Caserta said military commanders are dragging their feet. They should hold training, put up posters at workplaces and spread the word, he said

Last year the U.S.S. Stennis began a massive overhaul in Newport News, next to the Washington.

Navy authorities agreed to set up an interview with WHRO to explain how they would protect sailors on the Stennis in light of the deaths on the Washington.

The Navy then canceled the interview, citing upcoming Congressional hearings and investigations.

WHRO also reached out to Navy officials with questions about the Brandon Act and conditions on the U.S.S. Washington.

In response the Navy sent WHRO a press release about Secretary of the Navy Carlos Del Toro’s Tuesday visit to the Washington.

“We want the crew’s feedback and recommendations so we can continue to take immediate actions to improve their quality of life and the availability of mental health care services,” Del Toro said, according to the document.

The press release also said the Navy has sent increased mental health staff to the carrier, including a licensed clinical social worker.

The Navy did not provide specific answers to WHRO’s questions about the carriers, or how the Brandon Act would be implemented.