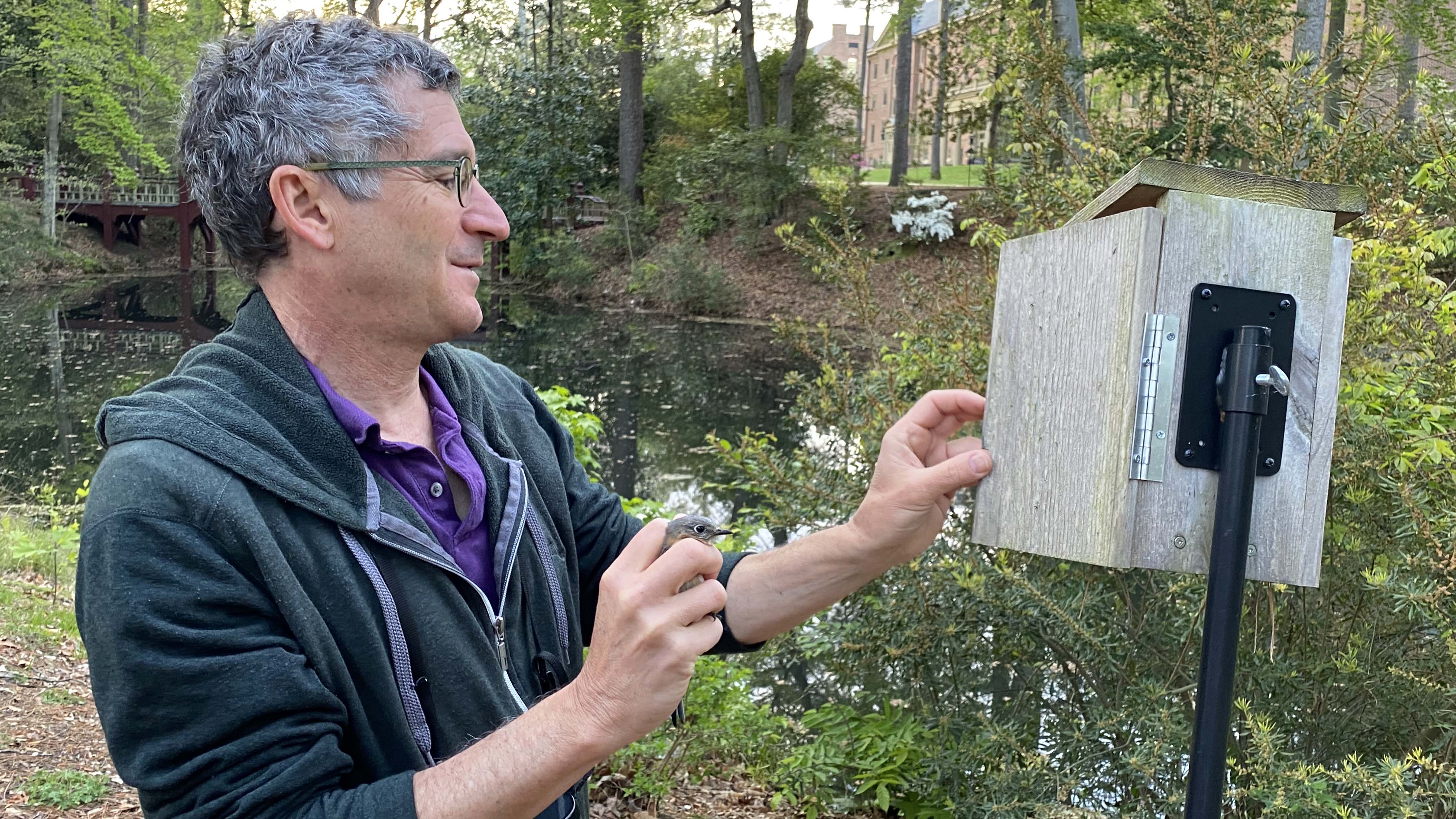 Professor Dan Cristol returns a bird to a birdhouse along the Crim Dell on William & Mary’s campus on Friday, April 22, 2022. Photo by Katherine Hafner.

Around campus, Dan Cristol is known as “the bird man.”

If you need to know the difference between a white-throated sparrow and a tufted titmouse – by sight or sound – he’s your guy. Same goes if you want to find the best place at William & Mary to spot a fluffy duckling.

Cristol is a biology professor who’s been birdwatching since he was 4 years old and has taught at the university since the 1990s.

He passes on that passion in his introductory ornithology class, which teaches interested birders and complete novices alike in the basics of avian knowledge.

Before the pandemic, he’d make his students meet before dawn and load up in a van he’d drive around the state.

Each semester, the class would typically spot more than 250 bird species everywhere from the West Virginia border to the Eastern Shore.

The class tried some labs over Zoom, where Cristol showed his students pictures of birds he’d seen that morning and played their calls.

“It was terrible,” he said.

Last spring, he decided to take a different tack. Instead of searching for birds, he’d let the birds come to them.

That means leading his students on a “bird walk” around campus. He takes small groups several times each week.

At 7 a.m. on a recent Friday, Cristol met a group of seven students bearing binoculars in front of the scenic Crim Dell at the center of campus. The sun was still rising and the campus calm, the student rush a couple more hours away.

“All right, everyone just listen for a minute, what do you hear?” Cristol said, priming the class to rely on their ears.

Then it was off to walk more than three miles over the next couple hours.

Before long, the view of buildings and sounds of university life faded as the students walked through forested parts of the property, including along Lake Matoaka.

Every now and then, Cristol paused to quiz students on what they’d seen and heard.

“It sounded like a chickadee, but it’s the beginning of the white-throated sparrow,” he clarified to the group after some guesses.

Paula Petersen, a 21-year-old senior majoring in biology, said she’s been involved in campus research for the past several years, including in Cristol’s lab looking at mercury’s effect on zebra finches.

In the first weeks of the semester, she recalls, “my mind was, like, blank” when hearing various bird calls. But now she can identify many of them.

Staying on campus has had its advantages, Cristol said.

“We see a lot fewer birds species-wise, but we get to know them much, much better because we see the same species and the same individuals over and over again,” he said. “In some ways I’m reluctant to go back to chasing birds all over the state.”

Those same individuals include pairs of mallard ducks and barred owls that reside by the Crim Dell where the class meets for their walks. The class even once saw a rusty blackbird, one of the region’s most rapidly declining species.

One woman, whose house the class passes sometimes, puts out halved grapes and jelly for seven Baltimore orioles that live in her hedge.

“They’re not even supposed to be here in the winter,” Cristol said. “They just stay here because they know she’s going to take care of them. … That’s a really fun case where the students get to see how (someone) relates to the birds.”

That ties in other lessons, like how temperature differences fueled by climate change allow the orioles to stick around.

Jordan Gooding, a 21-year-old senior majoring in both biology and kinesiology and health sciences, said she’s seen “exponential growth” in the dozens of bird species she can identify.

“The sheer volume of birds that we've learned over the semester was crazy because I didn't know,” she said. “And I've been on campus for four years. So it was wild.”

Gooding encouraged other beginners to give birdwatching a try.

“I think it's just good to be out in nature and have that appreciation for just living things around you.”