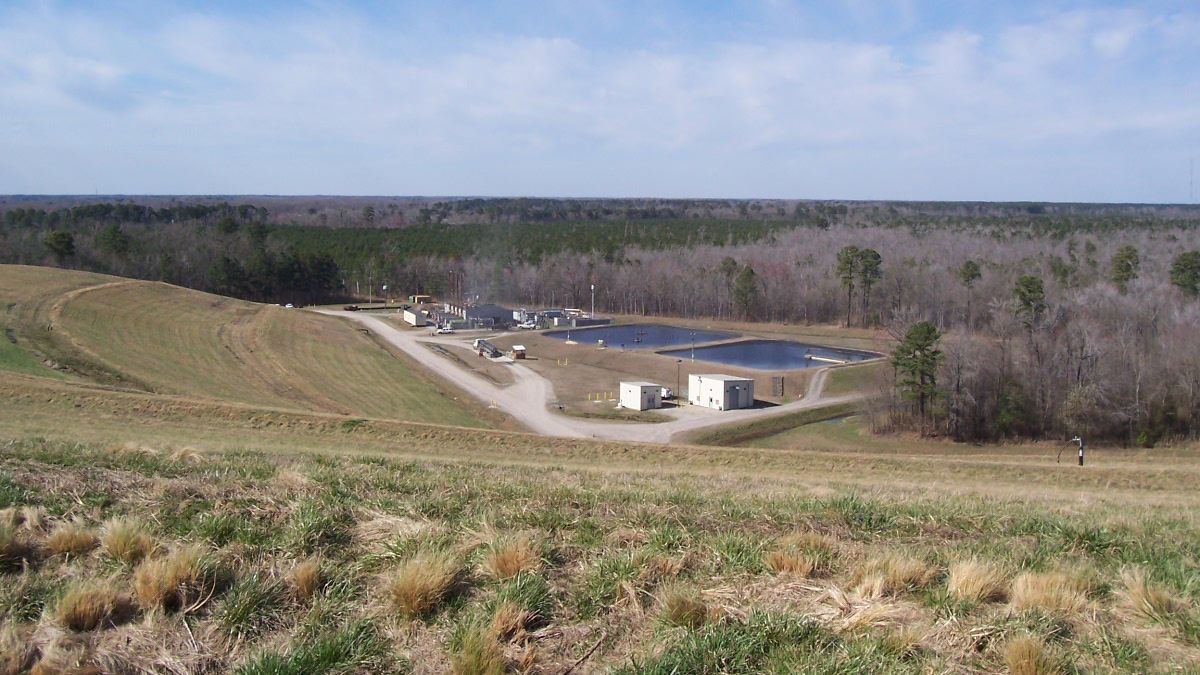 The leachate collection area at the Regional Landfill in Suffolk. SPSA is changing how it disposes of the leachate afterward. Photo courtesy of the Southeastern Public Service Authority.

When it rains at a landfill, water filters through the mountain of trash and pools at the bottom.

The industry term for the liquid is leachate. Others call it “garbage juice.”

The Southeastern Public Service Authority handles more than 40,000 gallons of it daily.

That’s the organization that collects and disposes trash for South Hampton Roads and runs the Regional Landfill in Suffolk.

For several decades the authority has sent its leachate to the Nansemond Treatment Plant of the Hampton Roads Sanitation District to be disposed. It’s treated there to remove any problematic substances before being discharged into local waterways.

But a few years ago, the district told SPSA officials they couldn’t keep doing that.

Because of that, Bott said it was likely to put a kink in the district’s plans to expand its Sustainable Water Initiative for Tomorrow.

SWIFT launched in 2018 and converts sewage into drinking water. The wastewater is highly treated then injected back into the Potomac aquifer, which has been depleted by long-term human use.

Bromide itself is a harmless and naturally occurring ion often found in drinking water or groundwater. The problem is when large concentrations of the ion react with oxidants used to treat water, Bott said. Disinfection byproducts can form that aren’t good for drinkable water.

The district looked at different methods to control the bromide but ultimately decided it couldn’t keep taking the landfill’s garbage juice.

“It’s fine for what we’re doing there now,” Bott said. “But as we contemplate this future full-scale SWIFT advancement it would be really nice not to have that additional bromide.”

SPSA executive director Dennis Bagley said he doesn’t think their leachate has particularly high levels of the ion compared to other landfills.

“I don’t think that’s so much a concern of ours as just being able to manage (the leachate).”

The authority originally developed a plan to build a pipeline to send the substance to HRSD’s Atlantic Treatment Plant in Virginia Beach instead. But that grew too costly.

This week, the SPSA board approved an on-site solution. They’re granting a nearly $7 million contract to Massachusetts-based Heartland Water Technology for what’s called a heat assisted evaporation system. HRSD will pay for half.

The system looks like a series of connected large pipes and pumps. The leachate enters and gets heated up – below boiling temperature – and sprayed through a pressurized system, Bagley said.

Liquid goes out as water vapor, while any solids fall to the bottom and go back to the landfill.

“It’s really not that complicated. It’s a very simple system,” he said. “If you lick the back of your hand and blow on it, your hand becomes cool because you’re evaporating the moisture off of your hand. It’s the same principle here.”

And no, the vapor is not expected to have an odor.

Dealing with the garbage juice within the landfill also means the authority won’t have to truck thousands of gallons of it on the road.

It’s also “much more economical for us to do it this way,” he added, and “gives us control of our destiny, so to speak.”

Leachate at the Regional Landfill has caused problems in the past.

About five years ago the liquid rose to nearly 30 feet within the plastic liners meant to contain it, threatening to spill into local waterways, according to reporting at the time by The Virginian-Pilot. A local engineering firm said it hoped HRSD would start taking up to 300,000 gallons of the substance per day.

Faulty equipment behind that problem has since been repaired, officials said at this week’s board meeting.

The new evaporator system will be able to process about 60,000 gallons daily.