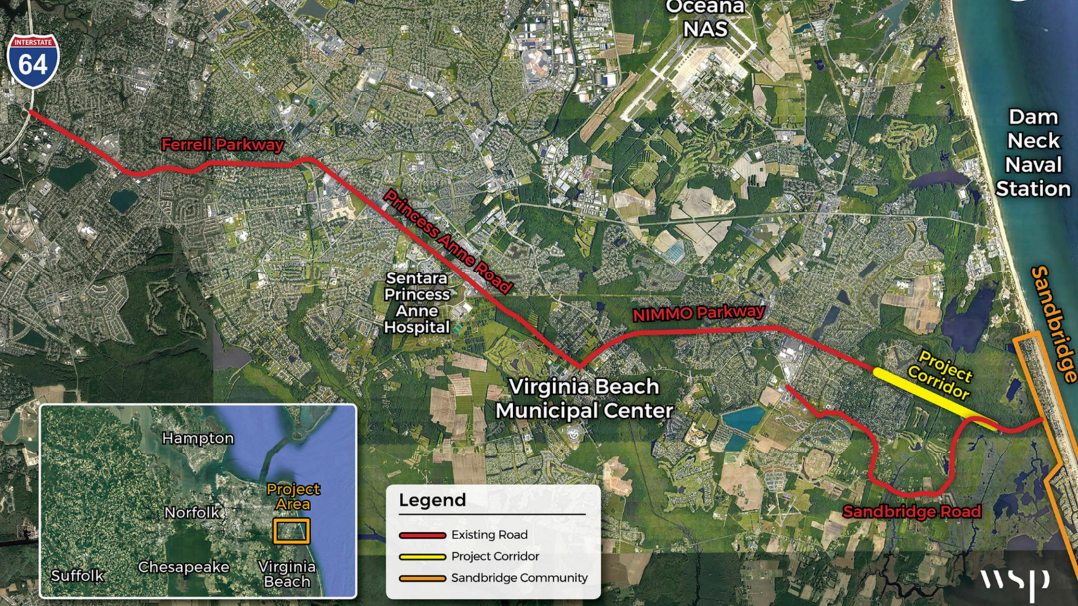 A map of the Virginia Reliability Project segments that run through Hampton Roads, via TC Energy’s project website.

A proposed natural gas project would double the size of a pipeline that runs through Hampton Roads to accommodate the region’s growing demand.

The Columbia Gas Transmission system runs from New York to the Midwest and Southeast. Virginia’s the southernmost of the 10 states it touches.

But Virginia Natural Gas says the pipeline infrastructure is outdated and can’t keep up.

“Since the last significant capacity investment in Hampton Roads 30 years ago, Virginia Natural Gas has seen more than 73% growth in the number of customers,” spokesman Rick Delahaya said in an emailed statement.

“With energy systems that are already fully subscribed and operating at their capacity, these enhancements to existing assets will help make certain that VNG can support the needs of its customers.”

Delahaya did not respond to requests to be interviewed.

The new proposal would replace two segments of the pipeline stretching about 48 miles from Sussex County to Chesapeake.

It’s called the Virginia Reliability Project and it comes from VNG’s supplier, Canada’s TC Energy, which bought the Columbia system in 2016.

The company recently filed initial application documents with the Federal Energy Regulatory Commission, which will oversee the host of permits required. If TC wins approval, officials expect construction to begin in early 2025.

In Hampton Roads, the project cuts through the middle of Isle of Wight county, through northern Suffolk, the north end of the Great Dismal Swamp Wildlife Refuge, just south of South Military Highway, ending at an existing point of delivery station in Chesapeake.

“This means essentially what it sounds like,” he said. “We will be lifting the pipeline that’s been existing out of the ground and in its place putting new, safer, reliable coated pipes in the exact same location.”

To achieve this, TC may have to expand or get new rights of way –  some just during construction, while others could be permanent easements. The company started sending information to homeowners along the route last summer.

In a few cases the company may reroute segments to minimize impacts to the environment, Stroman said, such as a portion currently at the top of the Dismal Swamp in Suffolk and Chesapeake.

Several Virginia officials have already written federal regulators in support of the project, including Chesapeake and Virginia Beach mayors Rick West and Bobby Dyer, and Barry DuVal, the former Newport News mayor, who is now CEO of the Virginia Chamber of Commerce.

“Our communities are looking forward to the jobs, investments and opportunities that will result from this long-needed project,” West wrote last month. “Please know that the people and communities who would be most impacted by VRP are enthusiastic about its benefits.”

Though the size of the pipeline will double, the energy capacity won’t. It’s expected to be boosted by about 50%, or by 100,000 dekatherms per day. That’s roughly equivalent to the amount powering about 400,000 homes.

The project would also include upgrades to compressor stations in Emporia and Petersburg.

Federal regulators are now working to evaluate potential environmental impacts of the project and will be seeking public input.

You can find detailed public documents and maps of the project on the Federal Energy Regulatory Commission website.