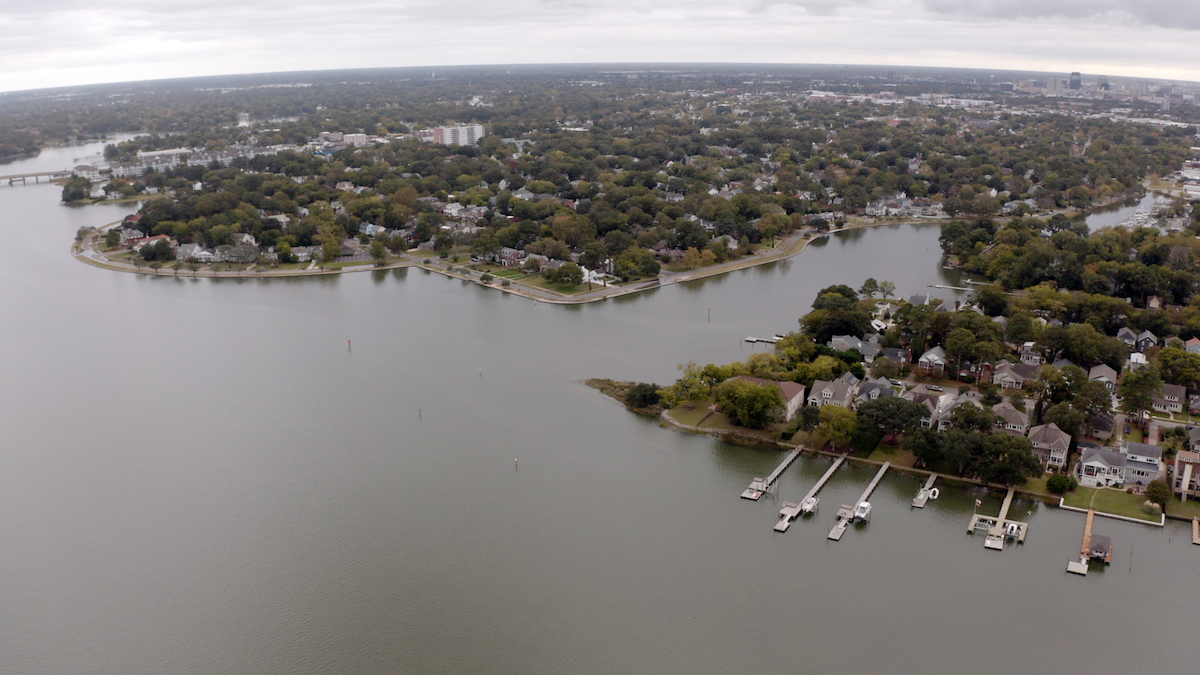 This story is part of “At A Crossroads,” a WHRO Public Media series exploring how coastal Virginia is dealing with higher waters due to climate change. The project is funded by the Pulitzer Center on Crisis Reporting as part of its nationwide Connected Coastlines reporting initiative.

In 2017, the U.S. Department of Housing and Urban Development awarded Norfolk $120 million to better protect its communities against natural disasters.

The city won the grant through the National Disaster Resilience Competition, which was set up after Hurricane Sandy — a 2012 storm that became a warning sign for potential threats from climate change.

Norfolk has used most of that money for infrastructure enhancements: building berms, raising walls and laying stormwater pipes.

But the city also set aside about $5 million for RISE, a nonprofit that helps businesses grow as they create solutions to help address climate change.

“The idea would be instead of taking $120 million of federal money and just putting it in the ground and then you’re done, why not try and grow our local economy, diversify it, develop some intellectual capital, maybe find out ways of doing things differently, cheaper, quicker?” Robinson said.

The first RISE challenge winners consisted of six companies, each receiving between $170,000 and $310,000, depending on the goals they outlined in their applications. The companies receive the funds in the form of reimbursements for their expenses over the course of three years.

One of those first winners was GROW Oyster Reefs, which helps grow native oyster reefs using a specially-made concrete that mimics an oyster’s shell.

Founder and CEO Evelyn Tickle said these porous reef tiles can be stacked, and each helps produce between 50 and 100 oysters.

“[Oysters] have been holding back the shorelines for millions of years. [They] keeps the silt in place. The reefs make sort of a wide and tall amalgamated fence,” Tickle said. “Another great aspect of it is that the reef attenuates wave energy, so it keeps the waves from breaking down that shoreline. So one of our main markets is shoreline retention.”

Tickle said the RISE program has provided mentorship opportunities and has connected her group with local organizations that share a similar mission.

GROW Oyster Reefs received a $274,500 grant from RISE, which Tickle said has been critical in getting her group off the ground. She said the money has helped the company improve its oyster-growing process through several rounds of testing she couldn’t have afforded otherwise.

“We’re one of the only companies that has actually done any testing on their product, and I wasn’t scared to go into that because I’ve tested it on my own. I know how successful it is,” Tickle said.

Another RISE winner is Wetlands Watch, a nonprofit in Norfolk that has helped conserve wetlands and shoreline habitats around coastal Virginia over the past two decades. The group also works with localities and the state on efforts to respond to sea level rise.

Sherin Hughes, assistant director of Wetlands Watch, says her organization has used its $150,000 grant from RISE to fund education and training operations. She says the goal is to grow the next generation of professionals dedicated to environmental conservation.

“What we’re doing is we’re training anybody that works with these practices,” Hughes said. “They can be engineers. They could be just stormwater professionals. They can be arborists, environmental scientists.”

Besides professional training, Wetlands Watch is bringing its expertise into local classrooms. Hughes says the nonprofit is piloting a program in partnership with the Elizabeth River Project that trains high school students in environmental stewardship, watershed health and stormwater management.

So far, Hughes said 18 students have had the opportunity to participate in these courses at Churchland High School in Portsmouth. She added Gloucester will implement the program in the spring.

“RISE funding allowed us to try it out. And there was a lot of trial and error,” Hughes said. The program kicked off during the COVID-19 pandemic, which often required them to be on the lookout for illness and convert a lot of their teachings into virtual learning opportunities.”

While the original $10 million his organization received had to be spent within the Hampton Roads region within five years, he said RISE has secured funding to continue the program in other cities in and out of Virginia.