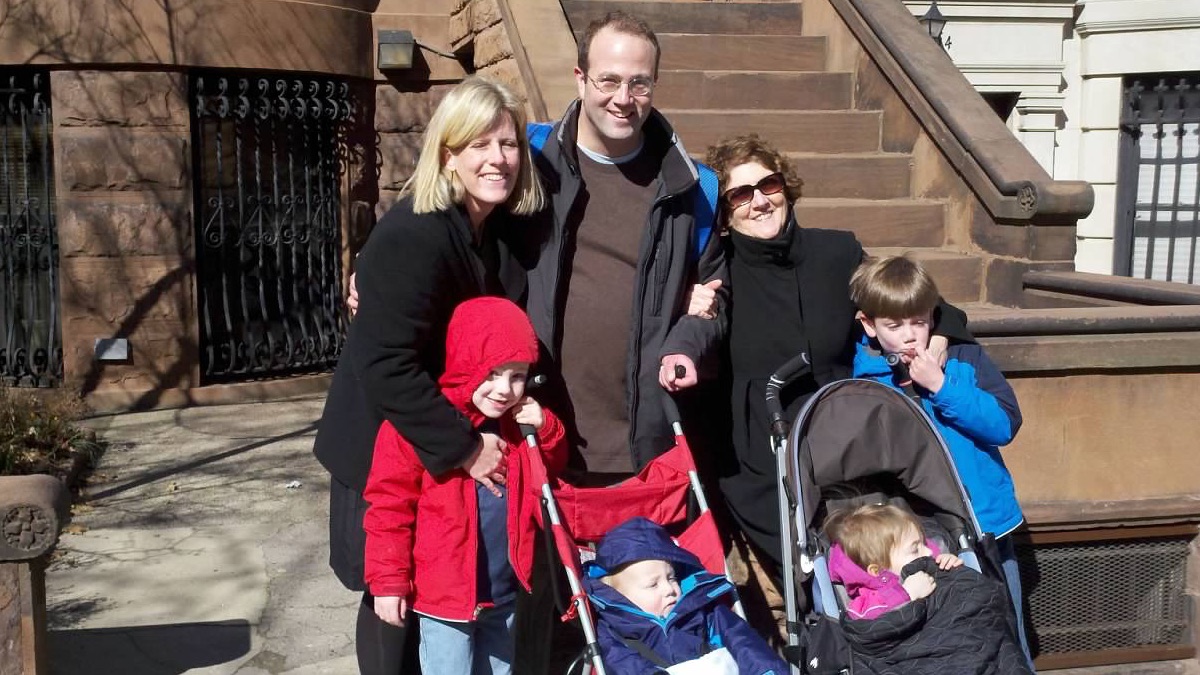 Photo by Anne Bibeau. In 2012 I went back to our neighborhood in Brooklyn with my wife, Anne, and our kids. My mom and a niece met us there.

My wife Anne and I were just a couple weeks shy of our second anniversary, living on the top floor of a beautiful 100-year-old brownstone in Park Slope, Brooklyn.

It was at the top of a hill, with a spectacular view across the borough and over to downtown Manhattan on the other side of the East River. The Twin Towers dominated that view.

One Friday, Anne and I had a guest for drinks and dinner, and we stared out our big picture windows at the Manhattan skyline.

The conversation turned to the towers themselves, and the bombing attack that happened there in 1993 - the year I first came from Virginia to New York City to become a magazine writer.

I remember how we scoffed at the idea that anyone would think those towers could be destroyed.

I hoped the subway would arrive quickly to the platform. Instead, more than an hour went by as I waited.

During that time, an announcement came over the speaker that a plane -- one -- hit one of the towers.

I assumed it was a small plane; that it was a terrible tragedy for a handful of people.

The subway arrived. I got on, and as the train came up out of the tunnels and onto the Manhattan Bridge where the Twin Towers should’ve been visible, the entire car was shocked at the size and intensity of the blaze.

A conductor came on the speaker system and suggested we pray or offer a thought for the people inside the building. There was a man on a seat nearby checking details on his phone, choked up with emotion.

I would think of him later when I learned how some of the people on Flight 77 in touch with people on the ground knew the hijacking was a suicide attack and knew they had to charge the cockpit.

The train slowly lumbered through the tunnels under Manhattan, and I still didn’t know what was really happening.

I arrived at work in Midtown Manhattan, and by then the second tower had been hit. Soon after, we learned the Pentagon was also struck.

Everyone at work gathered in one of the offices that had a view down the avenue to the burning towers in the distance. And suddenly, those towers just disappeared.

People in the office gasped. I did not. What was happening was too unreal for me to have much of a reaction.

I tried several times to reach my wife. Her train to work went under the World Trade Center. They would have cleared the subways from the area by the time the buildings collapsed. That’s what I told myself.

But it was difficult to contact people by phone or even email -- communications systems were overloaded.

Hours went by. I told myself she was fine. Thousands of people were almost certainly doing the same thing that day. Eventually I reconnected with Anne, and she was OK.

My younger sister, who worked nearby, came to my office. The heads of the company said we could all go home if we wanted. We did.

Our plan was for my sister, me, my wife, and an old friend who attended First Colonial High School with me in Virginia Beach -- Kennan -- to gather at his apartment on 21st street in Manhattan.

My sister and I left our building and entered a crowd milling around on the midtown streets. We gradually made our way toward the subway so we could reach Kennan’s place. Someone in the crowd became scared -- there were rumors floating around of hidden bombs elsewhere in the city -- and the entire mass of people ran toward the side of the building and tried to take shelter in the doorways.

The people stood there for a while, unmoving. I held my sister’s arm, and we looked around fruitlessly. After a few moments, people began laughing, shaking it off, and the crowd resumed walking.

I held my sister back for a moment more, letting exactly three people pass us.

I remember thinking that I wanted someone I didn’t know taking the risk of walking back into the street before she did, or I did.

We made it to Kennan’s. I hugged my wife. We weren’t downtown, but we were close enough to see the black plume of smoke dominating the sky.

It would hang there for some time, and the smell of burning plastic would linger in the air for days after.

As we all walked around the mostly empty streets of Manhattan, we suddenly heard jet aircraft overhead.

They were fighter jets from Langley, back home in Virginia, and Massachusetts. They’d arrived too late to do much, but the roaring overhead, the sound we’d all grown up with, comforted us.

“I was incredibly, bafflingly lucky”

That night as I lay in bed in my apartment in Brooklyn, with a space in that skyline out my window, I saw police helicopters flying overhead with search lights trained on different neighborhoods down the hill from me. The cops seemed to be circling a Muslim area of Brooklyn.

I want to pretend that I didn’t get some satisfaction from that, but that would be a lie. The only thing I can say in my defense is that I had company -- many, many people felt this way, and that was why this would be the start of a long terrible process of treating Americans like enemies. I wish I could go back and be different.

During the weeks that followed, New Yorkers lived with a dull fear of the next attack.

Missing posters covered poles all over the city, and all these people were last seen on high floors on one of the two towers. And you knew they were all, every one of them, dead, and there was no hope, but their family put the posters up anyway.

It made you realize that hope could be one of the most awful things imaginable.

During this time the grief and fear of this thing leaked into my life in small but noticeable ways.

The lights went out in the subway on a ride, and I thought about dying in a metal box surrounded by strangers. I woke up one Saturday morning and heard an explosion far away -- the controlled detonation of a structure, I found out later -- and I lay in bed a few seconds more to see if the shock wave of some terrible event would engulf me in my apartment.

On a vacation off Long Island, I stood on the ferry with my wife and thought idly about the possibility of a low-yield nuclear device levelling the city. When it would happen. Whether there was anything I could do. Whether we should leave for good now, and where we could possibly go.

The anthrax-laced letters began surfacing in the month after 9/11. My wife worked as a lawyer at a postal facility. Like many people, she had to proactively take the antibiotic Ciprofloxacin for possible exposure.

By this point, I had submitted my application to the Central Intelligence Agency, which was dumb. I spoke no foreign languages and had no national security experience.

After failing to get into the CIA I began to be open about my experience, and I began to write more about security issues for newspapers and magazines. The experience affected my work, and it made me think seriously about how the country does and does not protect itself.

I covered a domestic terrorism case that happened in 2003 where I found out that FBI field offices weren’t communicating with each other. I wrote an article about the process of recruiting foreign agents. Over the years I’ve talked to people from the CIA, the Defense Intelligence Agency, a variety of military intelligence agencies, as well as two former KGB agents and one member of the Afghan mujahedin.

As the years went by, I moved to Hampton Roads, and I continued writing and thinking about what happened to me. I’ve tried to explain accurately a baffling, complicated subject.

While I lived my little life with its small concerns, a calamity happened.

According to researchers at Brown University, almost 7,000 U.S. military personnel died in the wars that followed 9/11. The total number of dead is more than 800,000.

Approximately 335,000 of those killed were civilians.

Put another way: 9/11 was followed by a hundred 9/11s worth of dead civilians.

Whatever happened to me was nothing in comparison. I am one more person with one more story. The truly awful thing about 9/11 was how many stories it ruined or outright ended.

Every year after that event I was incredibly, bafflingly lucky.

And so many were not.