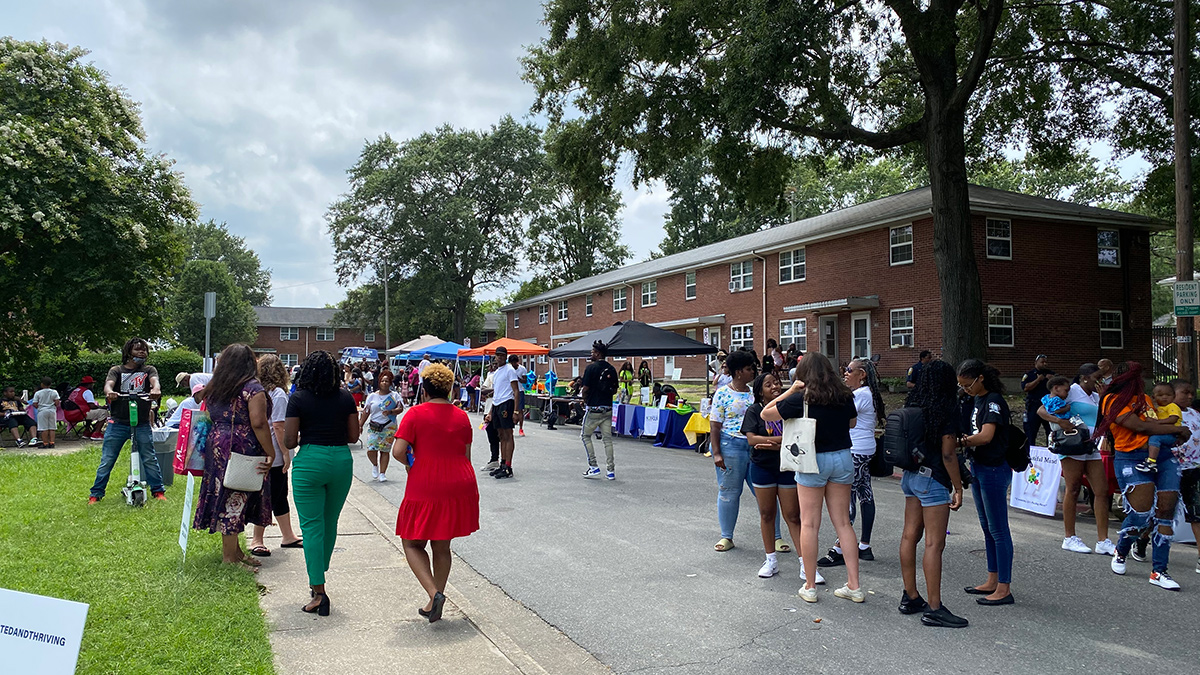 ‘Like You’re Celebrating Getting Rid Of Something’: Norfolk Holds Festival As Tidewater Gardens Clears Out

The noises on Saturday around the Tidewater Gardens public housing complex in Norfolk conflicted with each other.

One area included the sounds of excavators demolishing vacant units and dump trucks hauling away the rubble.

Just down the street, music blared as the city held a festival for residents. The block party celebrated Tidewater Gardens’ newly-graduated high school seniors and included free food and ice cream as well as raffle giveaways — like a foot massager.

Attendees could also job network and connect with local healthcare providers. City officials said the event was an opportunity to provide families with social support services as Norfolk continues to redevelop the neighborhood and forces residents to move out.

“Where was this when y’all weren’t tearing it down? Y’all didn’t have them then,” Khiara Morrow said.

Morrow, who boycotted the event and instead took her son to the zoo, noted there is a sense of sadness around the community.

She said it’s poor judgement for the city to have a festival right now.

“It’s kind of like you’re celebrating getting rid of something,” she said. “You have generations that lived out here. And to now see it be torn down, it’s like, that’s a lot of history for a lot of folks.”

Zenobia Wilson, who also didn’t attend the event, speculated the city is trying to “swindle” residents amid the demolition and as residents look for new homes.

Other residents did stop by the block party and said they enjoyed it.

In response to the complaints, Norfolk officials stressed the festival was meant to assist families and said the city wants to hold more events around the public housing community as COVID-19 restrictions ease.

Norfolk’s Tidewater Gardens project is part of the city’s massive plan to convert the St. Paul’s area near downtown into a mixed income commercial and residential community.

Officials are forcing Tidewater Gardens residents to relocate in phases, and the Norfolk Redevelopment and Housing Authority is giving them Housing Choice Vouchers to find somewhere else to live.

The city hopes to do the same with two other public housing complexes in the St. Paul’s area near downtown. Altogether, about 4,200 people — most of whom are Black — would have to relocate from St. Paul’s.

City officials say some families can return to the area once the redevelopment is complete. They also say they’re providing outgoing residents with support to find new apartments through Norfolk’s People First initiative.

WHRO previously reported that some residents say the city’s rhetoric is disingenuous and exaggerates the true impact of People First.

During the festival on Saturday, Elsie Mayo said she’s fed up with the project.

Mayo, who hasn’t relocated from Tidewater Gardens yet, used to live in a mostly-Black community in Norfolk’s Ghent neighborhood. In the 1960s and 1970s, the city forced residents to move out, bulldozed the community and then built expensive homes that make up the mostly-white community today.

“They just trying to force all the Black people out and just build a community they want,” she said. “They don’t care how we feel about it. They’re going to do what they want to do anyway.”

But Norfolk is still moving forward with its plans amid the legal process.

Officials have said more than half of Tidewater Gardens is vacant and the demolition of empy apartments will accelerate.