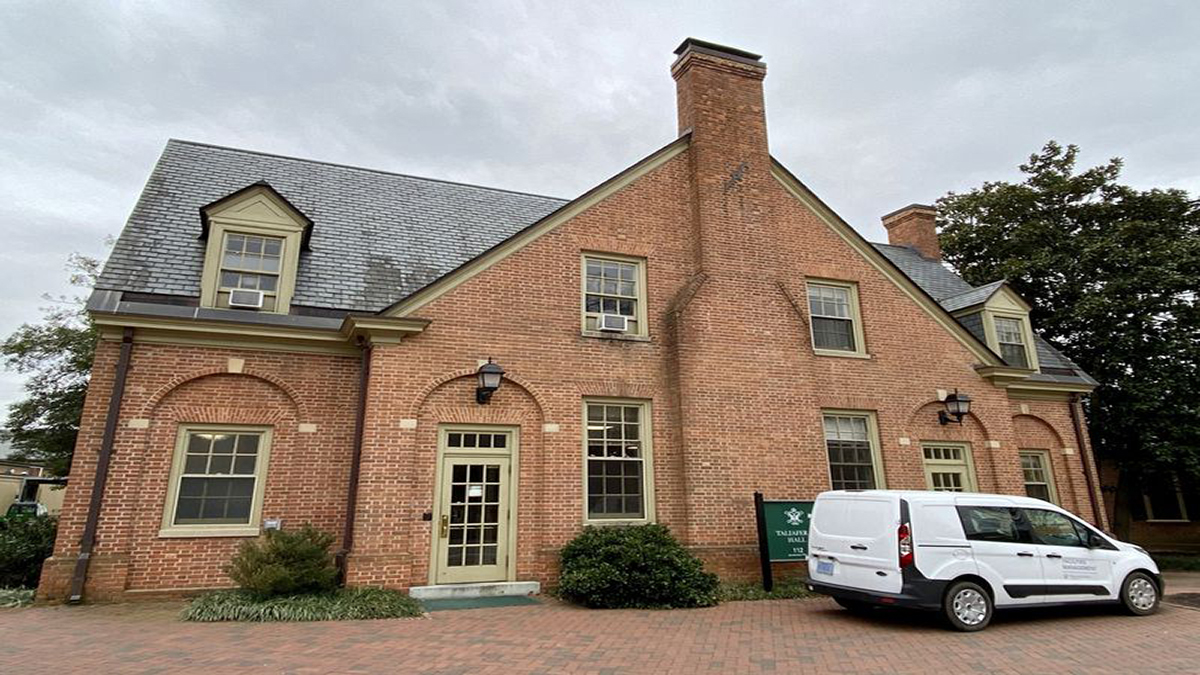 Photo from Virginia Media. William & Mary's Board of Visitors voted on Friday to rename Taliaferro Hall and other buildings around campus.

The College of William & Mary will change the names of several buildings that honor men with ties to the Confederacy and white supremacy.

The school’s board of visitors voted on Friday to rename Taliaferro Hall, Tyler Hall, Morton Hall and Cary Field.

“Today’s actions highlight the importance of acknowledging and commemorating the complete and complex history of an institution that represents this nation in full,” Rector John Littel said in a press release.

As the second-oldest college in the country, William & Mary has deep ties to slavery and white supremacy — it once relied on slaves to build and maintain the campus.

The board’s decision on Friday is the school’s latest attempt to reckon with its racist past. William & Mary has launched a project to study the college’s relationship with African Americans and make the campus a more comfortable space for students of color.

The move to rename the buildings comes after an analysis by the school’s design and review board, which is tasked with considering the renaming of campus buildings. William & Mary President Katherine Rowe also recommended the name changes to the school’s board.

“The naming of this hall gives students of color a chance to see themselves in a man in which a building is named after. This is a great honor to add to his legacy,” said Willis’ granddaughter, Mica Willis.

WHRO previously reported that Taliaferro has a complicated legacy. After owning slaves and serving as a Confederate general during the Civil War, he mentored Thomas Calhoun Walker, helping him become the first African American lawyer in Gloucester Country. Walker went on to work for two U.S. presidents.

Caleb Rogers, a relative of Taliaferro and a Williamsburg City councilman, applauded William & Mary’s decision to rename the dorm, noting the former Confederate general remained an unrepentant secessionist after the war.

“As the historical institution we are, I am glad we are considering the full history of a person in renaming Taliaferro Hall for Hulon Willis,” Rogers said.

Morton Hall is named for Richard Morton, a former William & Mary professor whose writings opposed opportunities for Black people after the Civil War.

The academic building will now honor John E. Boswell, a distinguished author and scholar of LGBTQ studies. After graduating from William & Mary, Boswell became a professor at Yale University where he founded the school’s Lesbian and Gay Studies Center.

“It brings honor to our 328-year-old institution that we name an academic building for an alumnus who used his William & Mary education to improve the lives of millions of Americans,” said Jeff Trammell, a former William & Mary rector. “John Boswell’s scholarship inspired the recognition of same-sex relationships here and around the world.”

William & Mary will also honor the first Asian American student to enroll at the college, Arthur Matsu, by naming The Arcade — an arched walkway at Zable Stadium — after him. University officials said Matsu became a star on the football team before graduating in 1927.

“We hope the Art Matsu arches usher in for many generations an opportunity to reflect and discern on how our community can further ameliorate the plight of diverse and minoritized students, faculty, and staff,” professors Francis Tanglao Aguas and Deenesh Sohoni said in a joint statement.

Other changes include amending the name of Cary Field so that it only refers to T. Archibald Cary. The old name honored T. Archibald and his father, John Cary — a former Confederate officer.

The college was more hesitant about changing the names of other buildings that honor slaveholders.

Students have asked the administration and board to remove all names associated with slavery, including those of Thomas Jefferson, James Monroe and George Washington — all of whom owned slaves.

President Katherine Rowe said the school will work on adding contextualization to references to the nation’s Founding Fathers.

“We cannot sweep them away and ignore the revolutionary ideas of liberty and democracy they launched; those ideas have empowered oppressed peoples around the world,” Rowe said. “Nor can we rest easy with simple stories of their achievements, without honestly grappling with how those ideas arose in a society defined by enslavement.”